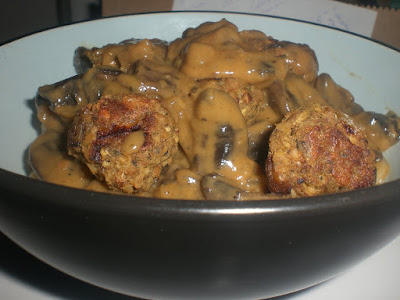 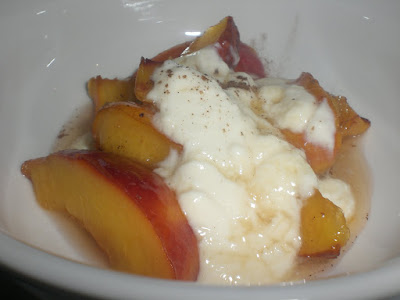 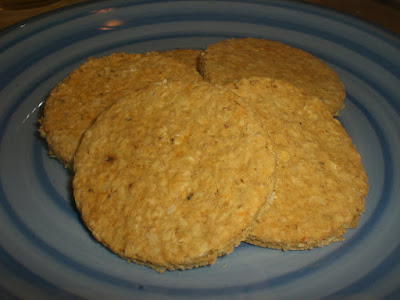 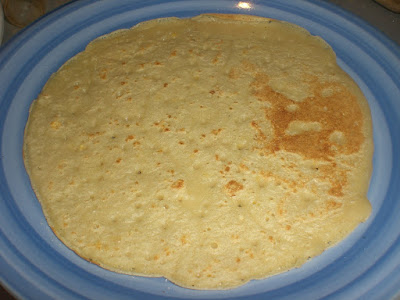 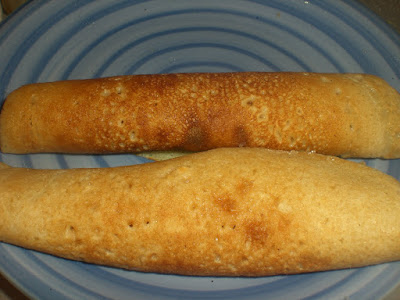 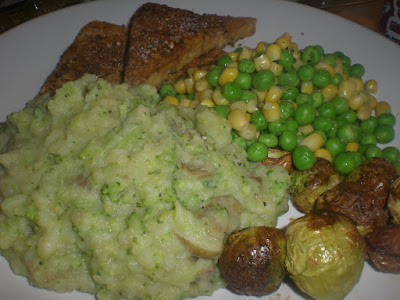 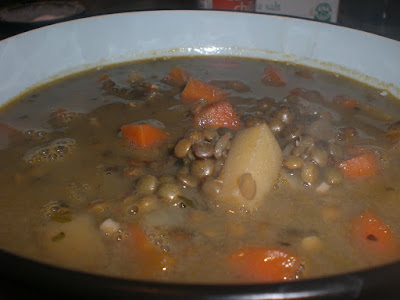 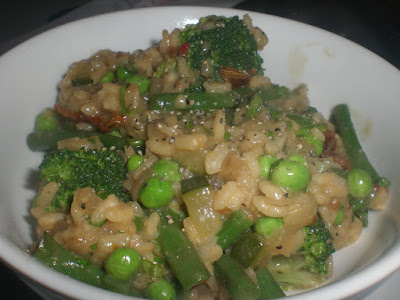 Tell me, Von Dahl-ing, what was it won you over?

"Don't give me that, matey. I know your game. Tell me, "Von Darling", what was it won you over? Was it the pumpernickel or the thought of hanging around with a lot of men in leather shorts?"

"I'll have you court martialed for this, Blackadder."

"What, for obeying the General's orders? That might be how you do things in Munich — or should I say München - but not here, Werner. You're a filthy Hun spy, aren't you? Baldrick - the cocker spaniel, please!!" **

Ahem, sorry. But sometimes I forget how awesome Blackadder was, until I go searching for a random quote with the word ‘darling’ in it so that I can make it into a bad pun for my post title. Le sigh. And that is one of my favourite ever episodes.

Get to the point Sal, I hear you cry! Well, I had Tarka Dahl for dinner yesterday and today and it was bloody spankingly loverly! I always order it in indian restaurants as a side dish but have never made it myself, but it was so easy!

I looked forward to it all day and it didn’t disappoint. I used THIS recipe, but used olive oil instead of butter and halved the recipe. It made a tonne, enough for 3 portions really rather than 2. I had it with brown basmati rice that I cooked in veggie stock then stirred some rocket leaves and a load of herbs (parsley and mint) through. YUM YUM YUM YUM YUM YUM YUM! So effing good. 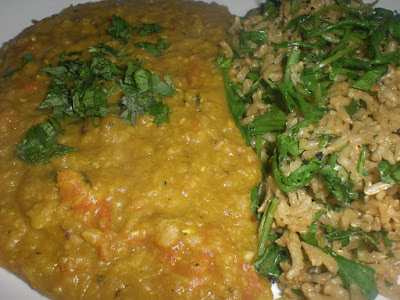 I made some savoury muffins t'other day. They were cornmeal, spelt flour, courgette, sweetcorn and some spices. Pretty good but nothing to write home about. Once I make them awesome I'll post the recipe. 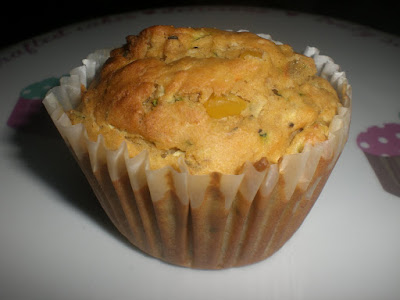 I thought this was pretty but it looks a bit of a mess in this pic. It was a one-pot wonder though! Tempeh, veggies, cooked spelt and spicy peanut sauce. YUM. 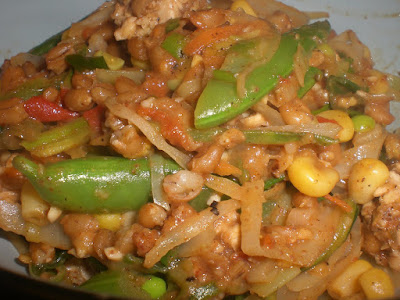 Sunday night's dinner, pizza! This wasn't my best effort I must admit. I bough some cheezly super melting edam style. YUK! I will stick to the mozarella from now on. This pizza was average at best, I didn't eat much of it. 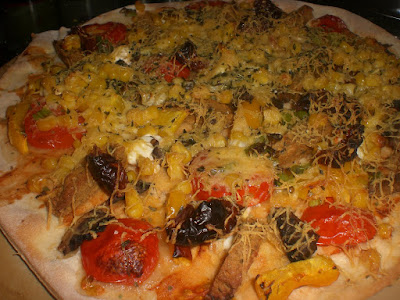 Saturday night I had a couple of friends round for dinner and a couple of apple martinis! I made us a brown rice salad with a tonne of veggies and some homemade tofu thrown in. I roasted up a chilli too and minced that up and threw it in. The batch was pretty mild but this was one spicy mama!! It was yummy. I made some roasted veg and some Eat Drink & Be Vegan Cumin Lime Tofu to go with but forgot to take a pic, doh! 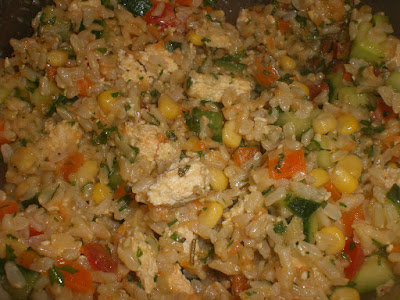 I also made us a choccy cake. A healthy one though, of sorts! hee hee. I used wholegrain spelt flour, replaced most of the oil with apple sauce and half the sugar with splenda. But then I put some chocolate ganache on top. I also put some desiccated coconut in the batter and some flaked coconut on top. Pretty yum. My friend ate most of it over the course of the night / breakfast and then took the leftovers home so I didn't have to worry about eating it all myself and ruining my diet! Score. 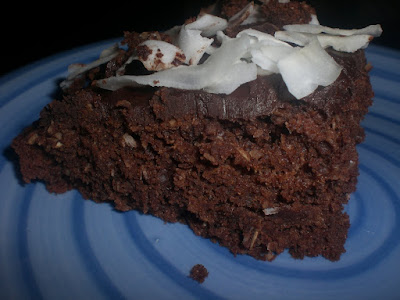 For snacks, I made us some dips. To go with I toasted up some pittas.... 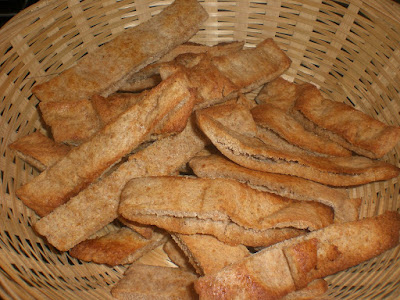 This was seriously the best hummus I've ever made, so good! I sprinkled some paprika and pine nuts on top to make it pretty. 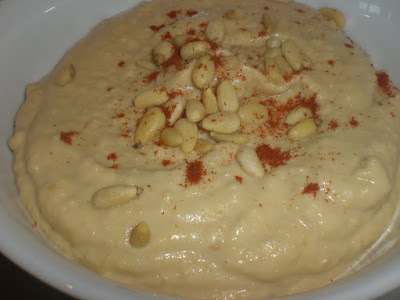 I also made baba ganoush. I've never made it before so I was winging it, it was pretty good! One aubergine, that I roasted until it was soft. I roasted some garlic along with it and threw that in, with some tahini, lemon juice, a pinch of cumin and salt & pepper. Yum. 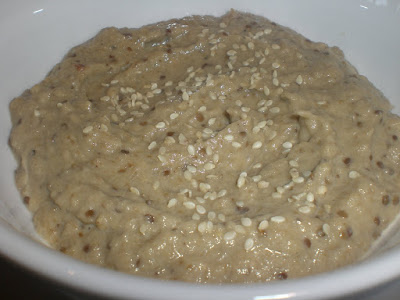 This was one tasty bad boy of a dinner last week - tempeh hash! I saw that episode of barefoot contessa where she makes chicken hash again! Last time I saw that I made veggie hash. This time I added in tempeh, pretty sure I stole that idea from Jessy! Served witha side of steamed broccoli. 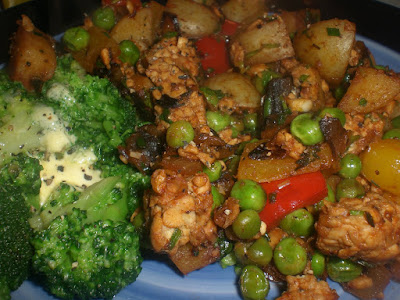 This was such a random mish mash of stuff I threw together as I hadn't been shopping! haha, it was good though. A grilled portabello, steamed cabbage, mustardy firm polenta, black beans with salt, pepper & hot sauce and steamed broccoli. I dressed the broccoli with a tsp each of sesame oil and soy sauce and added some sesame seeds on top - it was sooooo good. The broccoli and polenta were battling each other fiercely for the title of star of this plate - it was too close to call. 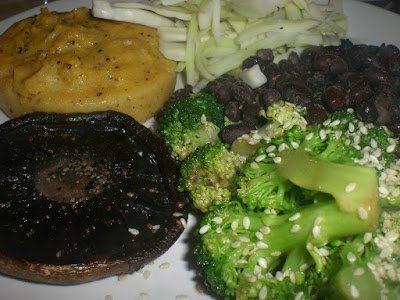 Lastly about my PIF post, it was a bit of a fail, only 2 people responded!! So no randomator needed! So - River & Vivacious Vegan - email me your details (click top right) and some homemade goodies will be winging their way to you at some point in the near future (it may take a while as my supplies are low and I need to do a bit of ordering!!)

Have a great weekend peeps.

**I couldn't find a clip of the episode that line is from but this is another of my favourite scenes. Brilliant! I must buy the DVDs!!
Posted by Sal - AlienOnToast at 21:49 8 comments: 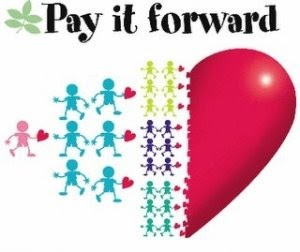 So I have a memory like a sieve and have been forgetting for ages that I need to put up my PIF post!!

The very awesome Bethany sent me the cutest calendar (there's a pic of it on her blog - I can't get one that does it justice), that arrived at the beginning of January (perfect timing) for PIF and so now it's my turn to dole out the love!

So I'm not the craftiest person ever, I am only just learning to knit. But I can make pretty decent bath/body goodies. So if anyone wants to take part, they will be getting some home made goodies to pamper themselves with from me.

If you want to take part, the dealio is this, leave me a comment and I'll choose 3 at random. You would then need to post about it on your blog and agree to send something handmade to the readers of your choice.

I'm not stipulating any rules about numbers or what you send - I didn't make this up so don't really think it's my place to.

So if you want some handmade goodies from me - HOLLAAA!