Today I thought I'd talk a bit about Slimming World. It's a funny one; I've followed the diet on and off for a while (mostly off if I'm honest) and I do find that when I stick to it, it works.

It can be a little restrictive, as all diets are when you're trying to lose weight. It's also very VERY geared towards omnivores and vegetarians. A lot of the free foods are dairy, egg or meat heavy and a lot of our equivalents have 'syns' - a word I detest by the way, but it's what they basically call anything they don't class as a free food or a healthy extra. I'll explain in a minute.

I play a little fast and loose with the rules, I won't lie. There are things I don't syn and should do if I were to follow 100%. But as I still get weight loss, because I don't go mad with these things, I happily carry on.

EDIT: Ps, I have other ideas for posts about Slimming World but I don't want to make this blog about that at all. So I started a new one. If you want a vegan resource for Slimming World, come and join me HERE.

So here's how it works.

Free Foods
You can eat as much of these as you want and are encouraged to fill up on them. They include ALL fruits and vegetables (except avocados*), pasta, noodles, potatoes, grains and rice.

Healthy Extras
You get 1 Healthy Extra A a day, which is generally dairy products or our equivalents. I usually use this for my soymilk, occasionally some cheese. You also get a b choice which is a limited amount of bread, oats, cereals, some seeds and nuts, some cereal bars and dried fruits. You don't get much of any of these though!

Syns
Ugh. A word I hate as I don't like associating food with negativity. However, it's what they call them and it's basically anything that doesn't fall into the above category. Pretty much 20 calories = 1 syn. You get 5-15 per day.

If you're anything like me, you'll get bored easily. So I'm always looking for ideas. So this post is to give you a few ideas for lunches, for when you get bored of homemade soup or salad, although those are great options! I'm also planning a follow up post with some dinner ideas.

Rice salad (2 syns)
Easy as pie, cooked rice, some beans, some veggies.... this was actually a pack of premade veggie rice (2 syns for the whole pack) and I added some extra kidney beans and sweetcorn to it. This was a lunch that I cobbled together from stuff I could eat from the local (crap small) sainsburys. A homemade version would be free because you could leave out the oil that the packaged rice has in it. 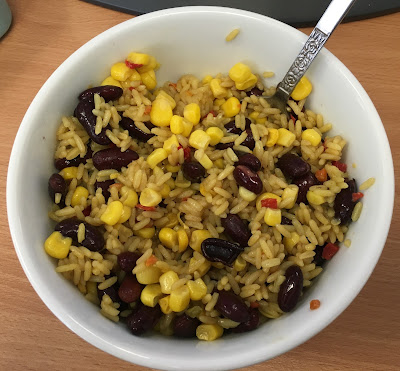 Spaghetti or Beans on Toast (Free/1 x HExB)
Such a cop out, easy lunch (or breakfast). Here is 1 Healthy Extra B (bread) and a tin of spaghetti. Tinned spaghetti and tinned baked beans are both free. 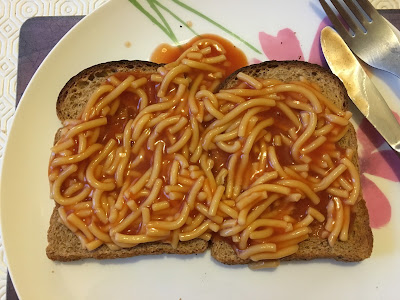 Pasta & Pesto (Free)
OK pesto isn't free, unless you make it yourself. This is the edamame pesto from appetite for reduction, made without the oil. The nooch in this recipe, isn't really enough to be worth synning when it's portioned out, because this recipe makes a LOT. I also added some broccoli in to cook with the pasta for the last 5 minutes or so, for this dish. A tiny sprinkling of nooch wouldn't really add any syns (it's only 0.5 for a whole tablespoon). 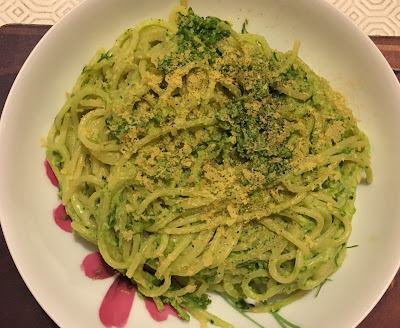 Roasted Veggies & Couscous or Pasta
Another really easy one! I roasted up some butternut squash, cherry tomatoes, courgettes and asparagus, then made a quick easy sauce of some sauteed onions, garlic and some dried herbs and added a bit of tomato puree and water. Mixed in the veg and served it on top of couscous (for Simon)... 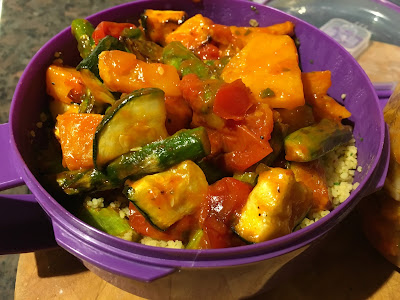 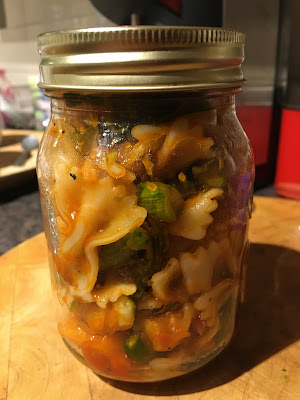 Bean Salad (Free)
This was actually a recipe from the Slimming World Veggie Delight (I think it's called) book. It was heinous! I hated it. Probably because I used plain tinned kidney beans instead of the ones in Chili sauce that it told you to use. But either way, not a fan.  However, a salad like this (beans and veggies) with a better tasting dressing on would be a great lunch. You could add some pasta or rice to it if you wanted, to bulk it out. Keep it free by not adding any oil to the dressing. 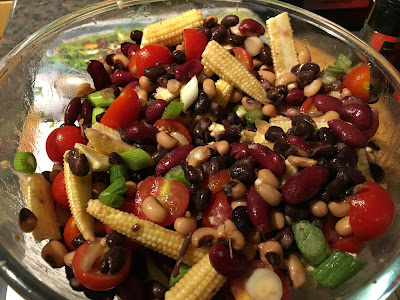 Also, another thing I love is making some baked tofu to snack on. Tofu is free and if you don't add oil, it stays that way. I dunk it in soy sauce, rub some seasoning on and then baked it at 180C for 20 minutes, flip it and then bake for at least another 15, to get a good texture. When it comes out the oven, I usually sprinkle it with a bit more soy sauce or some salt. 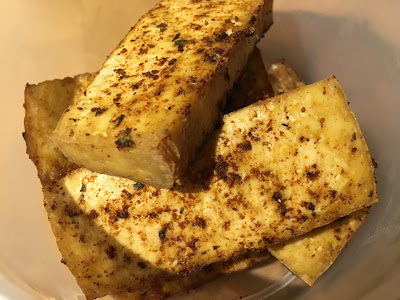 I'd love to hear from other vegans who have tried slimming world - does it work for you? Do you find it restrictive? Does the constant meat and quark talk in group drive you crazehhh....?