A whole heap of crap and I hate you blogger

So I just typed this muthafucka and then blogger deleted the whole. damn. thing! GARRR! So forgive me if it's less than informative! hahahaa.

Ooh I been busy lately from work to hen nights to planning a holiday to starting another blog!! More on that later though.

Onto the food. I got hold of some taifun tofu (which in my opinion kicks Cauldron's cack excuse for a new recipe's arse!!) and I sliced it up and brushed with a glaze of mustard, miso, rice syrup and a bit of olive oil. Then I sprinkled it with sesame seeds and baked it, brushing it again with loads more glaze half way through so it was good and sticky. It was delicious with steamed veg and herbed butter, well vitalite anyway. 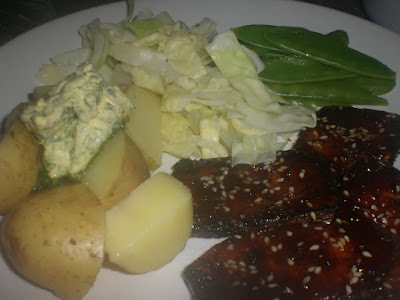 Leftovers the next day - with some tabouleh. 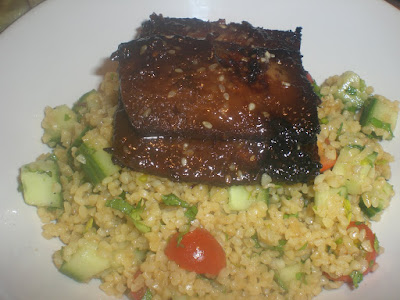 Microwave cupcakes! I quartered the basic chocolate recipe in vegan cupcakes take over the world and split it between 4 silicone baking cases and nuked them for 1 min and 40 seconds in total. The glaze was a mix of heated cherry jam that I seived and then mixed with icing sugar. 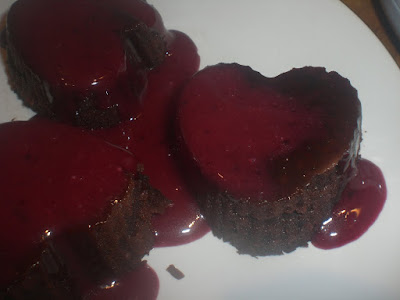 This week's dinner with the girlies. I made us a sweet potato and butternut squash curry (which was awesome)..... 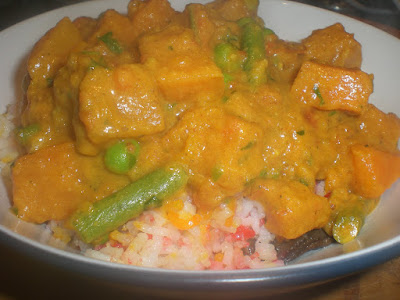 With some raita (strained alpro yoghurt, lemon juice, cucumber and fresh mint) with a wee drizzle of olive oil on top..... 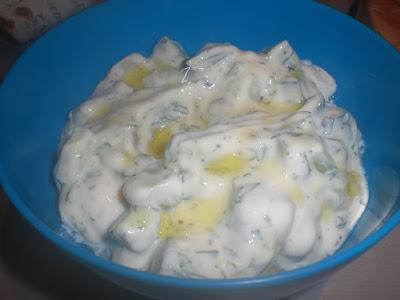 some mushroom rice (I made it foofy and fancy by dying a little bit yellow, a little bit red and mixing it in to look like takeaway rice).... 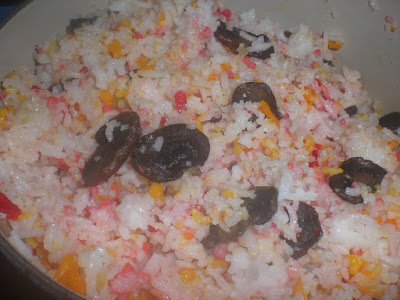 And homemade naan breads. As usual I was winging it, one day I'll remember to write down when I make up a recipe. 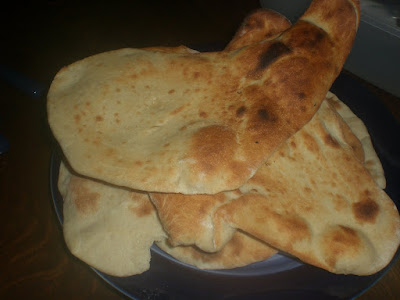 Dessert was ice cream - the easiest ice cream EVER. The flesh of a large mango, blended with 1 carton (250ml) of alpro fresh single soya cream and a tablespoon of rice syrup then put in the ice cream maker. Delish and easy peasy lemon squeezy. 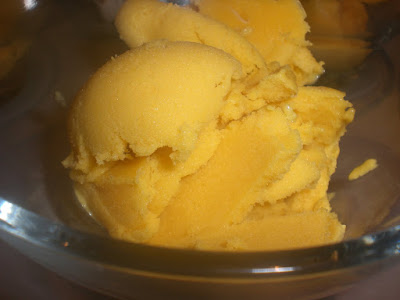 Onto seitan. I finally got around to makng the red seitan from Viva Vegan and yes, it is as awesome as everyone says it is. It makes 4 logs and you get 2 servings from each log. So I froze 2 and here are a couple of the meals I made with the other 2:

I brushed it with barbecue sauce and baked it for 15 mins. Served it with a baked potato topped with coleslaw. 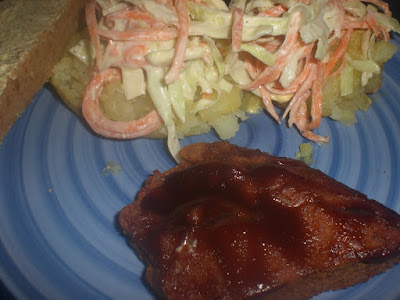 This was my favourite thing I did with it. I veganised Nigella's Moroccan Lamb & Cacik. Basically I took one log of seitan, just opened up the foil and poked holes in it then poured over and rubbed in a mixture of: 1.5tsp of ras-el hanou spice mixture, juice of 1/2 a lemon, 1 tbsp olive oil, 1 grated clove of garlic and a pinch of salt. Then I sealed the foil back up and baked it at 180C for 10 mins, then opened the foil and let it carry on cooking for another 10 minutes. I served it with bulgar wheat just cooked in veg stock and cacik (which is exactly the same as my raita above, but with a clove of garlic also grated in). 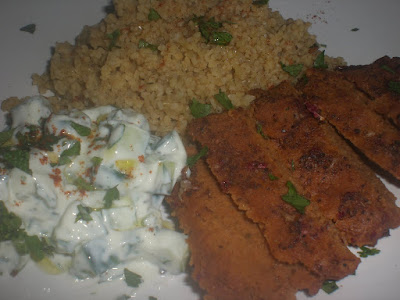 This is what the seitan looked like after baking, isn't it pretty with the rose petals from the ras-el hanout? 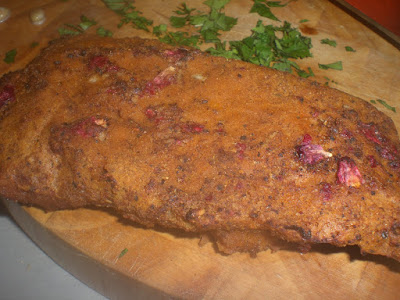 Here, I pressed the seitan into some ground peppercorns and dry fried it. Steamed veggies, mashed potatoes and stuffing with a tonne of gravy completed this awesome sunday roast! 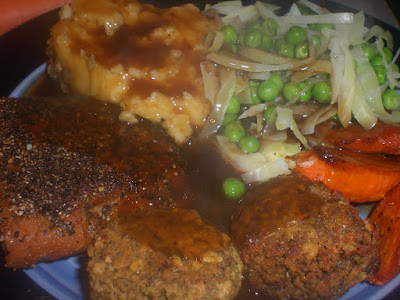 I made spelt bread. It was awesome but I've not got the recipe exactly how I want it yet, will report back with the recipe when I've got it right. 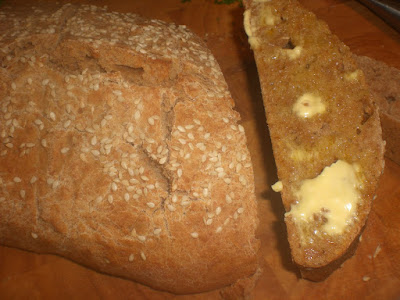 I also made some cornbread for a chilli the other week. But I love it most with jam! YUM. This recipe is from La Dolce Vegan. It always works perfectly for me every time, great recipe. 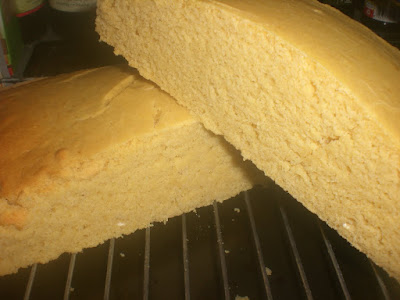 Remember that hen night I mentioned, here's a jug of pimms royale: pimms, prosecco, lemonade and a crap tonne of fruit. YUM!!!! 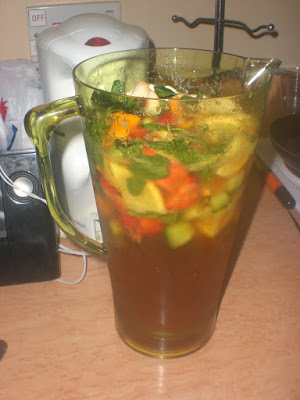 And some of my contributions to the food: cupcakes, rock road cookies and peanut butter cups. 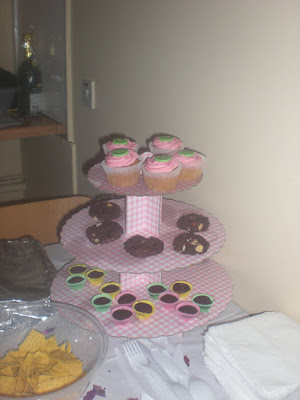 Close up of the cupcakes - it was a 90s weekend and we were doing a ravers theme - hence my aceeeeeed cupcakes! 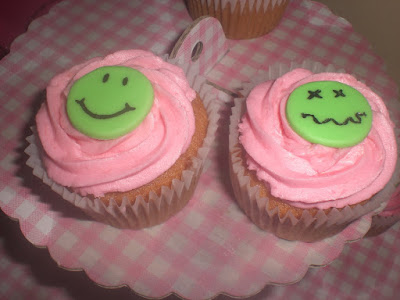 I also mentioned another blog! Totally separate from this one, I'm still keeping this one!! My new one is my beauty blog - mainly about make up but really is my showcase for make up work which I'll be adding to the more weddings / occasion make up that I do. Head on over and have a look if you're curious: http://sjbeauty.wordpress.com/. Blogger deleting my posts is just one of many reasons I decided to put the new one on wordpress!
I'm off to Dallas on holiday in a few days and I can't WAIT. So this'll be the last post before then, see you next time with pics of Dallas foodz!