So like I said, I have a tonne of pics for you because I've been a lazy/busy bint and haven't blogged in a month.

So I'm gonna start with a trip to Terre a Terre in Brighton with some PPKers last month. I had the smokey soul in a bowl - a jamaican inspired dish. It was good but way spicier than I thought. It was a corn cake filled with spinach. The absolute best thing about this was coconut spinach it was sitting on - SO good. 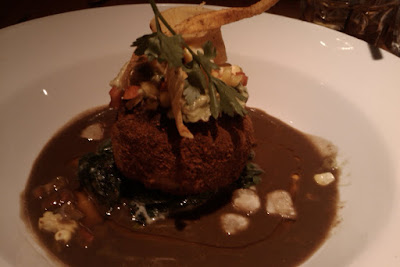 For dessert I had the fragipane tea & cake. It had amaretto ice cream (which is what sold this for me) and the cake was absolutely delicious. The glass was spicy fruity tea - weird but yummy. 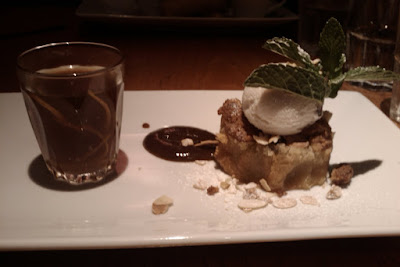 Yesterday I went for vegan pizza (among other stuff) at fellow PPKer Kip's house with a couple of other PPKers including Holley and JoJo and her hubby. Kip brought some daiya cheese back from a recent trip to the states and can I just say - it's pretty freakin awesome!! It actually melts and tastes like proper cheese. These pizzas rocked, but I only took a pic of one. This one had garlic, frys chicken style burgers and vegan bacon on. Yum. 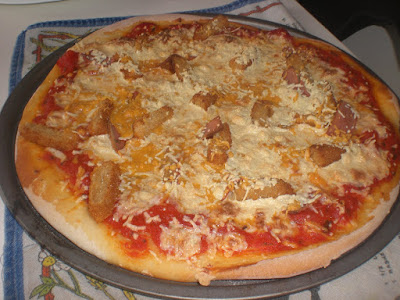 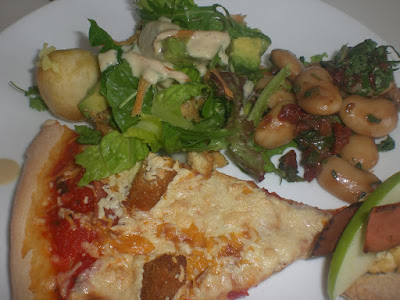 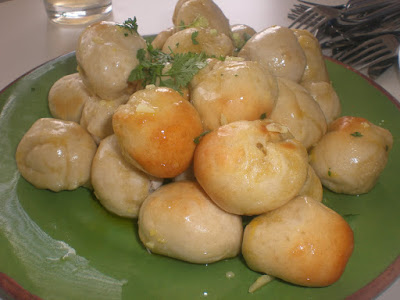 Fancy vol au vents. These had some cheesy stuff made with cashews (if I remember right), vegan bacon and a piece of apple. Kip is awesome! She also made this lavender lemonade which was so freakin amazing I can't tell you, but I forgot to take a pic! 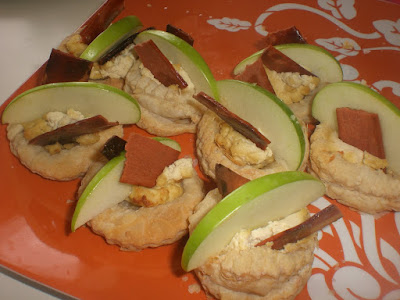 So remember I said Kip was awesome - further proof as if needed, oreo ice cream. 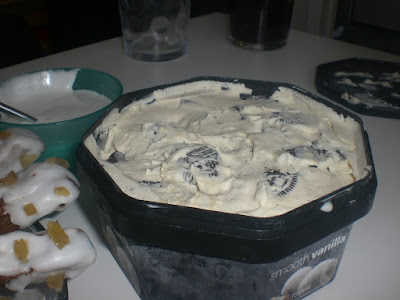 And a crap tonne of home made cookies. They were all delicious. 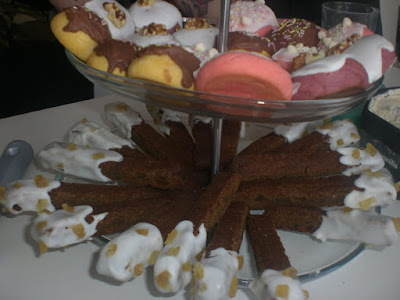 And my contribution - chocolate pie with hob nob cookie base. It didn't turn out exactly how I wanted it to and was a bit too crumbly, but it was still pretty good. But my poor pie did feel a bit intimidated next to all the amazing stuff that Kip made! 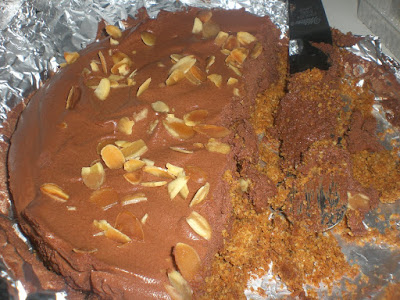 So I've been onsite for a few days for work and was really looking forward to eating decent food when I got home, even though I did not too bad in the hotel for food.

I went to waitrose on my way home as I heard their iced buns were vegan and really fancied them. Only they didn't have any! Poo. So I thought I'd make my own. I'm not posting the recipe because I really didn't get them right. They were way too chewy, but I'm willing to work on them till they're right. 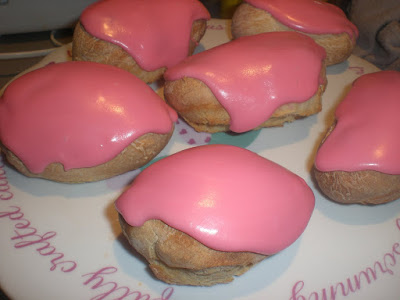 Dinner when I got back had to be something easy and quick. So I made a curry to use up the really overripe tomatoes in my fridge. I added a tonne of spinach, a tin of chickpeas, a small tin of new potatoes and some home made curry powder. Then added som soya yoghurt right at the end. It was yummy. This was dinner before I went onsite for my friends and I - chili, that I made using the new Linda McCartney soya mince, which used to be Realeat apparently. I really REALLY like the new recipe (or old one if you were ever able to get hold of Realeat which I never have been!). There's a couple more pics featuring this mince. 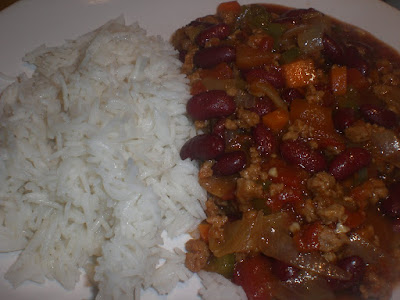 To go with it, I made us some corn muffins, these were AWESOME. I've posted the recipe at the end of the post. 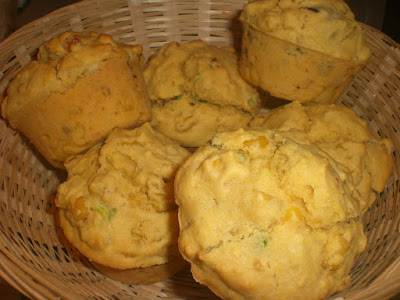 For pudding, I made us a low fat chocolate cake. I used this recipe off spark people - my mum uses this recipe a lot and it's really really good! I sandwiched it with some cherry jam and just dusted it with some icing sugar to make it purty! I took the leftovers onsite and myself and the safety manager polished it off when no one was looking! :-) I made a couple of changes, I used cider vinegar instead of balsamic and I only used half a cup of sugar insteadof a whole one and added in 6 tbps of splenda to make up the sweetness. 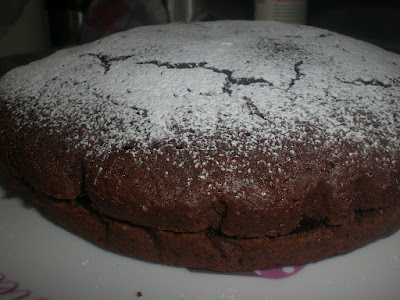 OK onto some random pics that were on my camera.

I wanted to make some coronation tofu but I did't have any mango chutney, so I just used yoghurt and curry powder. It was still pretty good. I used the new cauldro tofu, which is WAY soft and I don't really like it. But it was ok. I mixed the remainder of the sauce into some leftover cooked rice and some veggies. 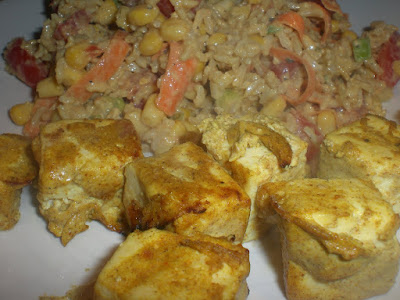 I made some chickpea burgers when I wanted something quick one day. They were alright but nothing special. To go with though I had some broccoli that I steamed and then dressed with a tsp each of sesame oil, soy sauce and sesame seeds. YUM. And some butternut squash roasted with a bit of curry powder. 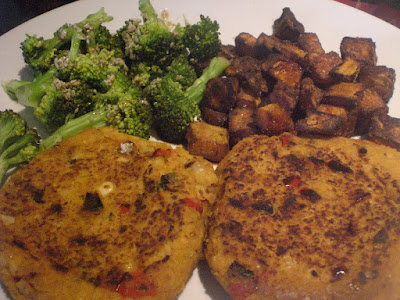 Dessert last Sunday, a quick crumble for one! I had a rather mangy looking apple in my fruit bowl and found some frozen peaches in my freezer so I mixed them with some lemon juice, spices and some dried cranberries. Then added a crumble topping and baked it. I had it with soya cream, well about half of it anyway. It was not bad. 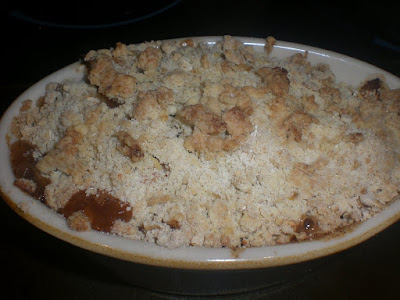 A quick dinner one day, I had some coriander and mint in the fridge and some leftover rocket leaves so I whizzed them up with a small clove of grated garlic, some pine nuts, olive oil and nooch to make a pesto. Then I had it with some pasta with some peas mixed in. YUM. 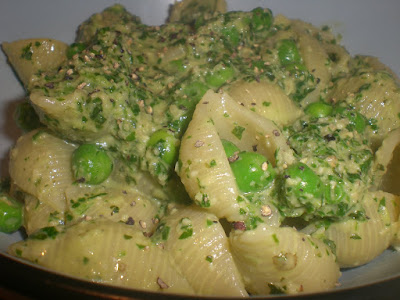 I made spaghetti bolognaise with the linda mc mince for a friend and I a while back and I forgot to take a pic. But the next day I mixed the leftovers with some black beans and some tabasco to make a quick chilli and had it on top of a baked potato. Good stuff. 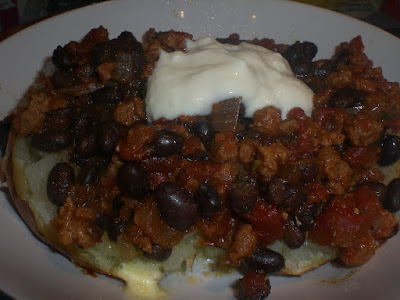 Oh look - more soya mince!! Old fashioned stylee. This is what got me to buy the stuff in the first place. My mum used to make the best mince ever when I was a kid. Obviously now I don't eat beef anymore so when I went over there a few weeks ago, she made me some with the Linda Mc mince, which I never would have bought because I hate most fake meats. She added bisto granules (GENIUS!) and some veggies and it was so freakin good I ran home and bought a bag myself to have a go. And here it was with tenderstem broccoli, green beans and potato/sweet potato mash - which by the way is a little piile of heaven. So delicious, low fat and proper comfort food! 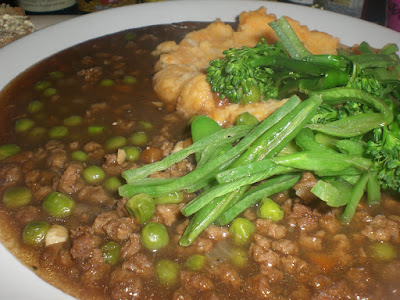 Leftovers - some tofu that I just sprayed with braggs and dusted well with bacon salt and then baked. It really did taste bacony! It was yummy. I had some cooked rice leftover so I just mixed it with some veg and a vinaigrette. 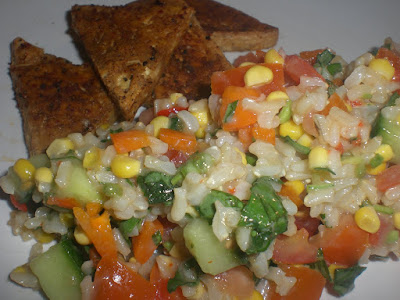 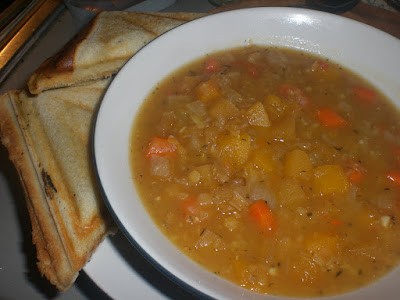 These were some cupcakes I made a few weeks back. I saw Giada de Laurentiis make cupcakes out of brownie mix (cheater cheater compulsive eater!!) and they looked pretty good. But I don't know if any box mixes are vegan plus honestly, it's not that hard to make chocolate cakes!! But I stole the flavouring ideas. I added walnuts and chocolate chips to the batter and then topped them with cream cheese frosting and more choc chips. I used the new Pure cream cheese. It was not bad, not as good as tofutti though. Plus it's really sweet so no good for savoury stuff. 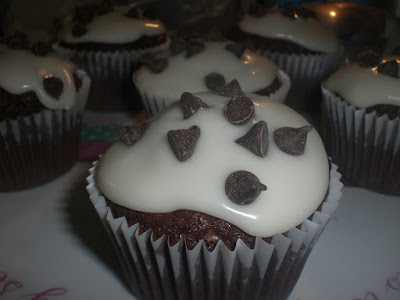 Oh and I bought some tiger bread one day and I had french toast for breakfast. With ketchup, the way it should be, none of this maple syrup crap. OK! 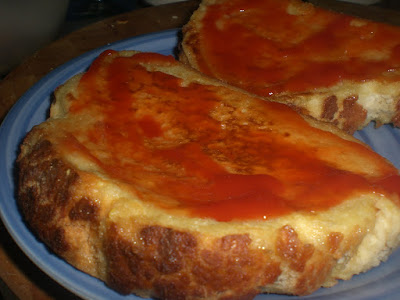 Oh and I forgot about this till I saw the pic but in the words of Janice.... OH. MY. GOD!! This was an african sweet potato / peanut stew and it was SO effing good, make it - make it NOW! I got the recipe off spark people again. 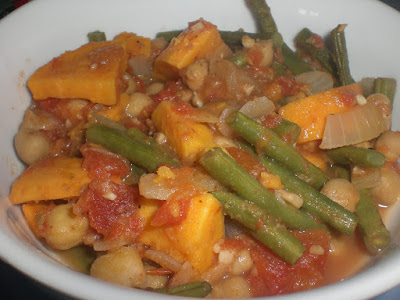 And as promised the corn muffin recipe, I did it all in cups - sorry UK people, I was too lazy to weigh.

Method:
Mix together dry ingredients. Make sure the spring onions, s-d tomatoes and sweetcorn get a good coating of dry ingredients to stop them sinking to the bottom of the batter.

Whisk together the wet ingredients and then pour into the dry and mix until just combined.

Spray a muffin tin with oil and then divide the mixture between six holes. I filled them pretty much full to make 6 bigger muffins, but you could probably eek it out to 7 or 8 if you make them smaller.

Bake for 20 minutes or until a skewer comes out clean. Leave in the tin a few minutes until the muffins are cool enough to remove from the tins. Then put on a cooling rack to finish cooling.

Hello? Hey WAKE UP!! Told you it was a long one. Congrats if you're still awake!!

It's just occurred to me it's been forever since I blogged.

Crazy few weeks with work etc so it's slipped my mind and I'm really behind with everyone's blogs too.

I'm onsite at a show for work right now, freezing my arse off and getting shouted at by ill-tempered a-hole contractors, but I'll be back in a couple of days and have a load of pics to share with you then.