Does anyone else find the Ermahgerd memes as hilarious as me?  They crack me up for some silly reason.

So anyway next month is MoFo and I figured I should probably try and get a couple blog posts in as I’m going to try and commit myself to doing MoFo this year. Last year I was WAY too lazy.

So I’ve cleared out my camera and here we go…..

Remember last time I was talking about me and my friends doing Come Dine With Me? Well here are the pics from my friend Holley’s night. For some reason I don’t seem to have one of the starter or of dessert but I did get the menu…. 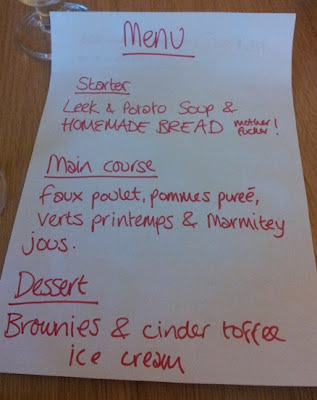 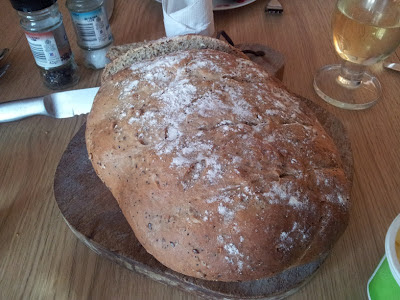 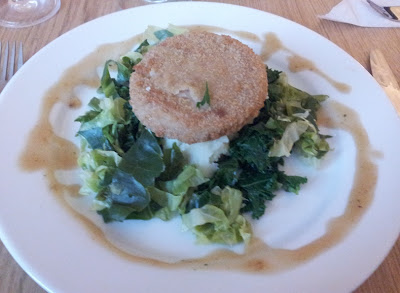 And the vegan white Russian that Holley’s boyfriend made for us. They were good!﻿ 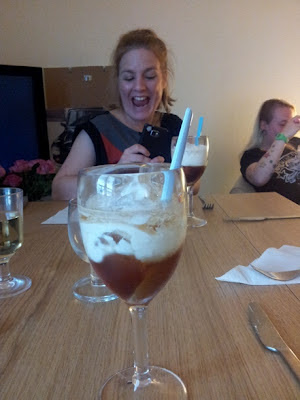 I found this pic on my phone and thought it was funny.  We went to my cousin’s birthday party a while back and it was a bit of a drive, we all took a sarnie each.  My brother wrote on all the packs so we knew who’s was who’s – this is what he wrote on mine.  His girlfriend tried to be nice by putting a vegan sunflower on but really, I think the big turd in the middle of the bag is what draws the attention! 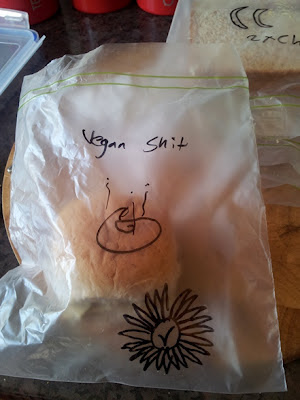 Here are some cupcakes I made for my friend’s mum’s 60th birthday.  The ones that look a little like boobies are coconut and cherry.  I tweeked the basic vanilla cupcake recipe in vegan cupcakes take over the world to use coconut milk instead of soy and I added some coconut extract.  I dug a little hole out of each one and put in a spoon of cherry jam then topped them with coconut butter cream and a glace cherry. 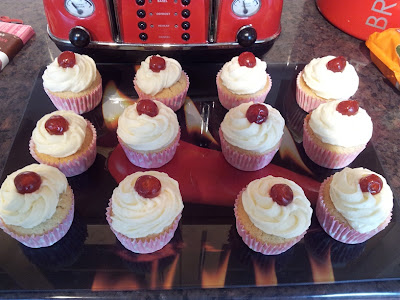 These are the peanut butter cupcakes from VCTOTW with a basic chocolate buttercream on top. 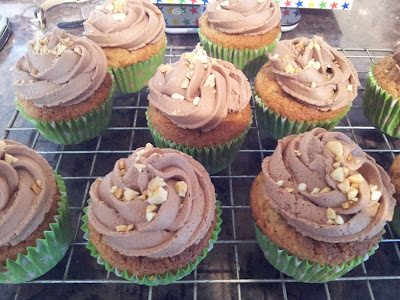 Some pics now from a day out in London with my ladybros, before I went off to Greece in June.  We went to InSpiral and I got this rather awesome bagel.  It had avocado and raw cheese and some other goodness in it. 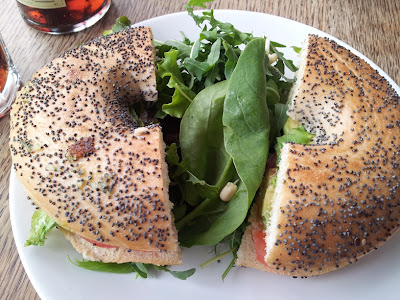 And because you have to when you go InSpiral, I had a side of their wedges and garlic mayo, both of which are just fucking amazing. 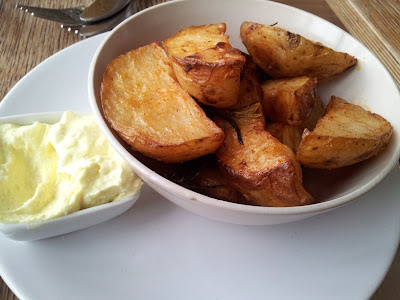 These pics are from a day in brighton.  We were supposed to have a picnic but it pissed it down, so instead we went to WaiKikaMooKau and I ordered a salad as I knew we’d probably eat again later.  But that was daft because it was massive.  This was the falafel salad and it was really good. 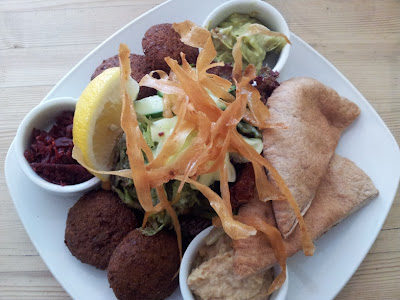 Then we got gelato from Boho Gelato.  If you’re ever in Brighton, give this place a visit.  They always have about 5 vegans flavours on the go.  This was bellini flavour and lurking underneath is their coffee and amaretto (I think!!) whatever it is, it is freaking awesome. 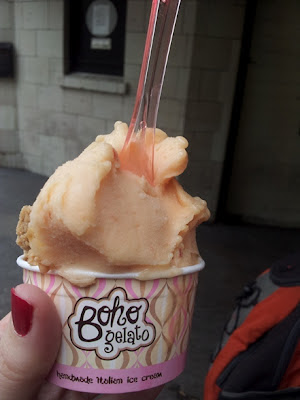 Then we went to the pub and got some Rekorderlig cider.  I fell in love with this stuff when I was on holiday, as they sold cans of all different flavours for 1 euro in the little supermarket down the road.  Our post-lunch cider run became a bit of a tradition! Kip is excited as you can see! 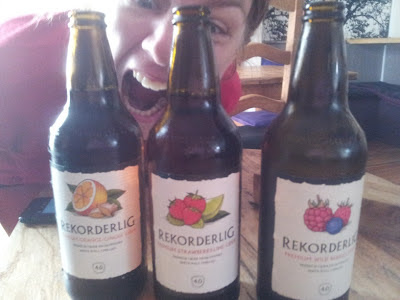 Here are some photos of food from a picnic with my vegan ladybros, Kip, Jojo & Holley.  We all met 3 years ago on the first PPK Brighton picnic and since then they have become 3 of my BFFs.  I feel very lucky to have made friends with such funny, intelligent, lovely, awesome (and slightly ridiculous) ladies.


What’s funny is that at the first picnic everyone was showing off with making fancy foodz.  At this one I was just “I made hummus and bought bread but I was too lazy to make stuff with pastry so I bought linda mccartney sausage rolls…” hahah  Although Jojo did actually make a quiche and coleslaw. 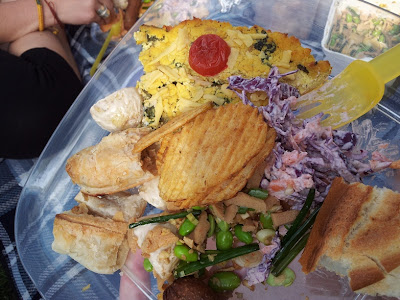 I did make cookies though, they are the peanut cookies from the book you can see in the pic! 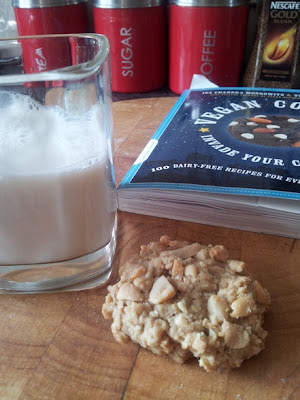 After eating we went to our favourite pub and when Jojo told the barman it was our ‘best-friend-aversary’ (he looked at us funny but then) he gave us free shots.  They are fishermans flavour and are absolutely DISGUSTING. But hey they were free. 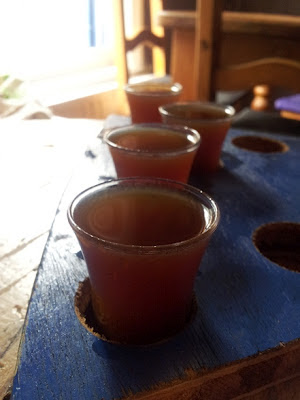 Here is a dumb shot we tried to take of us in the pub using the timer on my phone. FAIL. Yes we are wearing matching t-shirts.  Kip & I found them in H&M and got over-excited and bought them. Somehow we managed to keep quiet about it for about 2 months so we could surprise Jojo & Holley with them on the day. 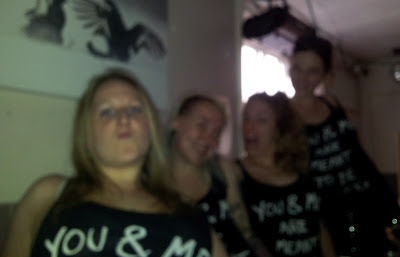 And here is the awesome brunch that Jojo & her husband Nick made us the next day – muffins, pancakes, sausage, tofu scramble and taters. It was radder than it looks!  Bonus pic of my knees! 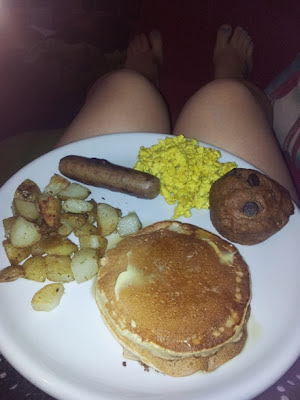 I shall leave you with a picture of Jazzy.  She sat and stared at me like this for hours when I was off sick last week.  Inching closer and closer and squeaking at me until I got up and fed her.  Pain in the ass cat, but I love her. 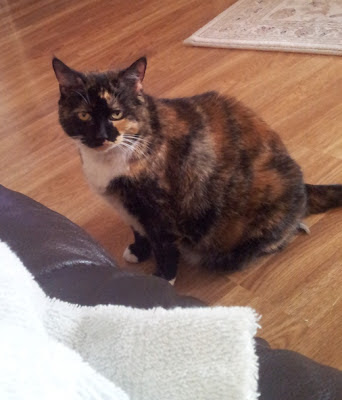