Today I am celebrating 12 years of veganism and as I celebrate my veganniversary, Mr Alien is starting Veganuary. YAY! I suspect a few of us share a veganniversary and as someone about embark on Veganuary, I asked my Mr Alien, AKA Simon, to say a few words about why he’s doing this. 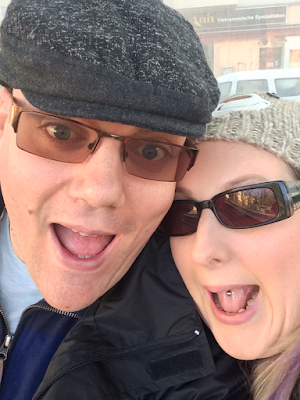 Hi all, a bit of a different blog post today from Sal’s other half. As I’m sure some of you know Sal married an omnivore and for the last five years I’ve been quite happy with that…..well I say quite happy but I stopped eating Pork, Lamb, Duck and fish as it didn’t seem right. Then last year I ended up in hospital for a week, came out of hospital and had a recovery period of a few months. I had found that dairy used to make me feel claggy in the throat, so I experimented with different types and found that filtered milk didn’t make me feel so claggy, so I moved to that. However, I still felt flat, lethargic and had started to feel bad when I thought about the animals that were being used in my food. So before Christmas, I had the following conversation with Sal:

ME: “you know, I think I am going to give Veganuary a try”.
Sal: “Really, or are you just saying that”
ME: “No I think I’m going to go for it”
Sal: “OK well think about it then”

So I did think about it and the more I looked into it and the benefits it could have, the more it seemed the sensible decision to make. I even asked comedian and Vegan, Michael Legge (@michaellegge on Twitter - if you’re not following the Do The Right Thing Podcast you should; it’s brilliant) what he would suggest, (not really expecting any answer at all let alone a serious answer) but to his credit he suggested the following:

“Buy a decent flask, so when travelling you’ll have a readymade food source from home, as the first few months will be finding out what will be convenient for where you are and buy wet wipes.” *

(*I’m condensing and paraphrasing the tweets into one sentence!)

So here I am day 1 of Veganuary; I’ve had toast with peanut butter and tea and coffee with no dairy in them (Oatly as the replacement). We have a meal with in-laws later so I have found a pub with a vegan menu and we’re going there and I’ll be spending the next couple of days using the book  “Appetite for reduction” as a guide for vegan meals to eat that are healthy as well.

I can’t guarantee I will stay vegan after January, but I am determined to take it one day at a time and complete Veganuary. I strongly suspect that at the end of it I may well be off meat completely, as I have been feeling that way for a while now so let’s see where I am at the end of the month.

I guess this means I now have to share my booja booja chocolate with him? Shit.

Is anyone else doing Veganuary? if you are or if you are already vegan and have some advice for Simon, let me know in the comments or come talk to me on Instagram or Simon or I on Twitter (@SimonJamesEllis / @sal_on_toast)