.... oooover ma shoulldeerrrr. Oh I'm gonna be singing that song all freakin day!! Ah well. The reason for it is that when I was looking through the pics for today's post, I realised 3 of the items were follow ons from last week's post and one was a recipe from last year.

So remember last time, the tomato soup recipe I posted? Well it makes 2 servings and I had one left in the fridge and I turned it into a couple of pasta dishes instead of just reheating it.

Starting with this one, a simple dish. I just sauteed some mushrooms and added some soya mince and a some gravy granules and half the remaining soup and served it over wholewheat spaghetti with a little sprinkle of nooch and parsley. 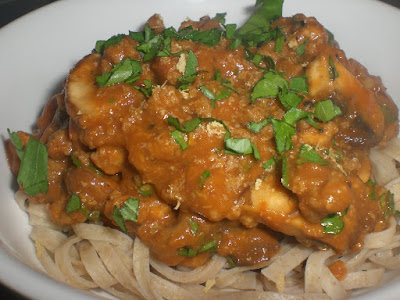 This was the winner though. I sauteed some mushrooms and some spring onions, added the other half of the soup and some capers and stirred it into wholewheat penne. Then I made a salad of sweet red and yellow cherry tomatoes, capers and toasted pine nuts with just some salt, pepper and really good olive oil on and put it up on top of the pasta. Simple but delicious! 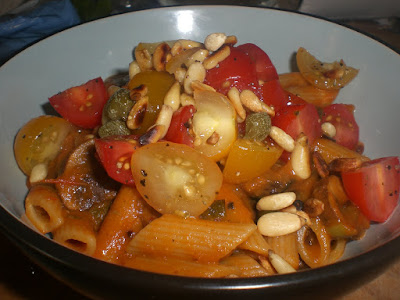 On saturday night, my friend was down for her first wedding make up trial (wedding in Oct and I'm doing the make up!!) and for dinner I cooked us some of my carrot falafel with tahini sauce, some tabouleh and just a simple salad of rocket with a simple lemon juice and olive oil dressing. I've just put some chickpeas on to cook so I can make these again, I forgot how yummy they are. 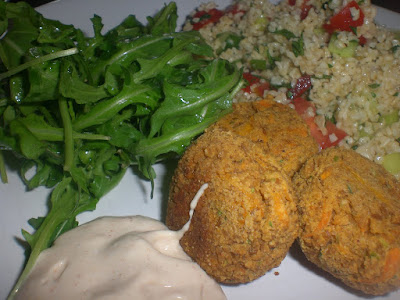 And last time I made the vegan brunch omelets. Well I had half the batter left so I made another one. But I made a total mess of it when I flipped it, probably because I put the batter in the pan chilled and it was hard to spread. Next time I'll remember to bring it out before hand. 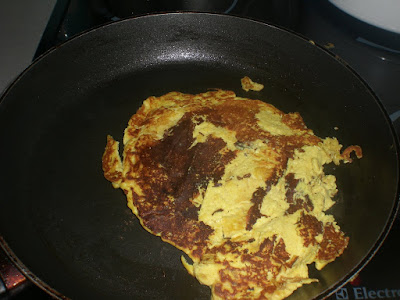 Still once it had a topping of mushrooms sauteed in soy sauce and herbs and a bit of cheezly mozz on it, all was forgiven! 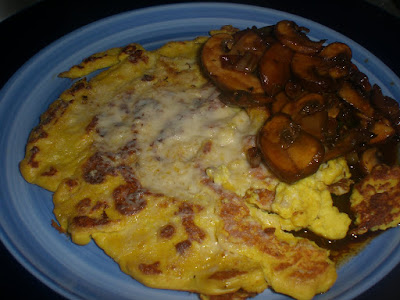 This soup I made the other day to use up some fresh corn I had. It was pretty crap so I won't bother giving you the recipe. 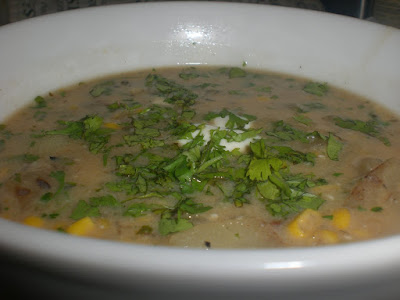 And today I made mini muffins, I like to have some around for snacks and they are less calories than a full size muffin. Recipe is below pic. 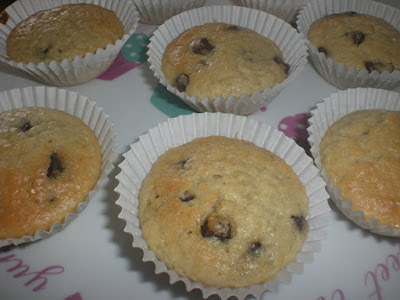 Coconut Choc Chip Mini Muffins
Will make around 16 mini muffins or about 6 regular sized ones.

Spoon a couple of tbsp (about half way up the case) into each case and then bake for 20 mins, or until a skewer comes out clean. For regular muffins they'll take around 25 mins.

Transfer to wire rack to cool.
That's all for now folks.

Look at me posting after only 8 days' break!! hehe. It's a mini post from me today, because honestly, I really haven't cooked all that much this last week. I've been out for dinner a couple of times and instead of having the girls over here we went to Em's and she cooked - wonders will never cease!! :-)

So I'll start with the other day's lunch, roasted cherry tomato soup. This had a trip hit of tomatoes because I also added some tinned (well boxed actually) and some sun-dried toms. Recipe is at the end of the post. It was yummy. 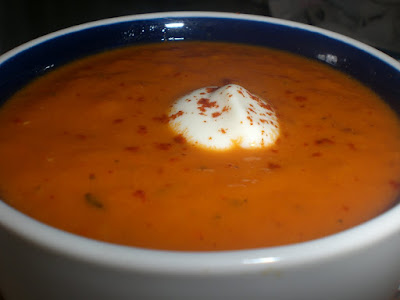 Brunch today - I had some tofu leftover from the brownies that are coming up in a minute! So I made tofu omelettes from vegan brunch. I halved the recipe and the other half of the omelette batter is in the fridge for tomorrow morning. Once I spread out the batter I chucked on some chopped up sun dried tomatoes, spring onions, sweetcorn and a couple of rings of jarred jalapenos. Then flipped it to cook the second side. Then I flipped it back and sprinkled it with black pepper, dried oregano and grated on some cheezly mozz, then stuck it under the grill for a minute to melt. Soooooo delicious. 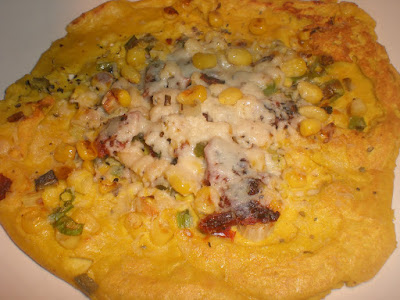 I said brownies.... I made these on Tuesday night to take to Em's for pudding. The recipe is from Vegan Cookies .... for the chocolate brownies and I added 1/3 cup of walnuts and 2 packets (50g total) of white chocolate buttons broken up. I cooked them for just the very minimum amount of time so they would be super fudgy and delicous and they were - best vegan brownies I've ever made!! SO EFFING GOOD. I must admit, when I first bought this book I was underwhelmed with it, but I've now made a few things and everything has been so tasty that I've really grown to love the book. 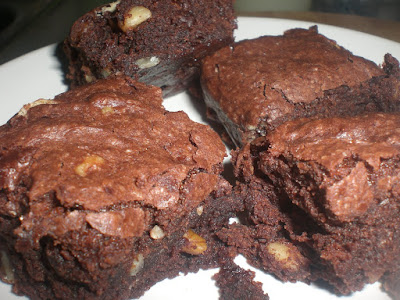 Dinner the other night, tacos! I sauteed a couple of spring onions and a clove of garlic and added a cup of sainsbury's frozen veggie mince (they didn't have any Linda McCartney, but this one is pretty much the same!). I added half a box of chopped tomatoes, a green chilli, some mild pepperdew peppers (I didn't have any red or yellow peppers!) and some cumin, coriander, oregano and paprika. I also grated about half a courgette in finely, then left it to reduce down. It was easy, nice and not too spicy. It made enough to fill about 6 taco shells, so I had leftovers. I had some salsa in the fridge so I topped it with that, some shredded lettuce and some soya yoghurt. Oh and some chopped, fresh coriander. 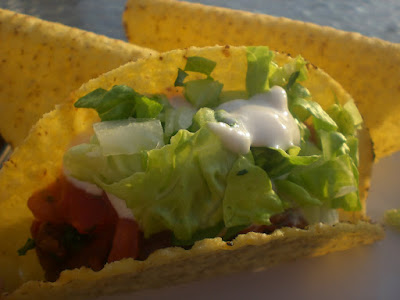 Close up of the taco filling... 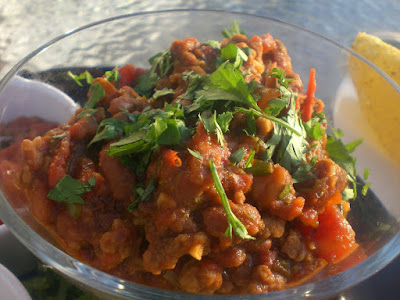 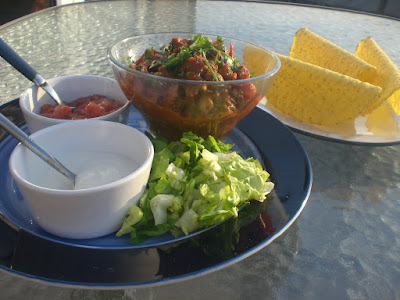 Method:
Put the cherry tomatoes and garlic on a baking sheet and drizzle on a little bit of oil then bake at 200C/400F for 20 minutes.

Saute the onion over medium high in a tbsp or so of olive oil, with a good pinch of salt, for 5 minutes until starting to soften but not too coloured.

Once the tomatoes and garlic are done, pop the garlic out of the papery skins and set aside. Don't bother taking the skin off the tomatoes.

Back to the onions! Add the wine the pan and let it bubble off for a couple of minutes. Then add all the other ingredients and bring to the boil. Reduce heat and leave to simmer for 15 minutes.

Then pour into a blend and blend till smooth.

I served mine with a small blob of soya yoghurt on top, just to look poncey but it's not essential.