These aren't the droids you're looking for!

EDIT: I've just realised that on the 5th of March this blog was 2 years old! Thank you thank you everyone who reads. I love yous.

I finally have an excuse to use that post title - I got a new phone – it’s an android phone (similar to iPhones but cooler!! Hahah). I’m very excited about it and not just cuz it’s pink....

It's actually that light pink colour, the hot pink surround is a skin I bought for it to protect it when I drop it, which will happen - I'm clumsy. 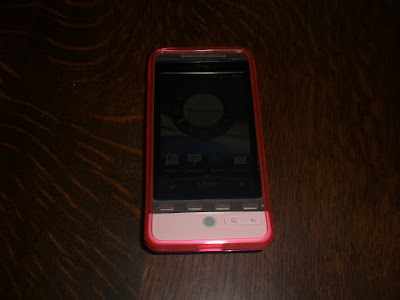 I thought I’d start off with a pic that I took on the phone – this was brunch on Sunday, not bad for a camera phone. I went down to visit my brother and his girlfriend in their new flat in Hove. Sunday morning we caught the bus into Brighton, which is awesome because it’s so vegan friendly. We went to Wai Kika Moo Kau – I’ve wanted to go there for ages because I love the name of it! It’s a vegetarian cafe with vegan options as well. I had the full vegan English breakfast: sausages, marinated tofu, oven baked butter beans (instead of tinned baked beans which are the devil’s work), tomatoes with pesto sauce and a yummy hash brown. It was awesome and I had a soya latte with it. My bro and his girlfriend had the veggie breakfast, he wasn’t getting bacon or ‘proper’ sausages so he needed eggs - I think tofu would have finished him off! 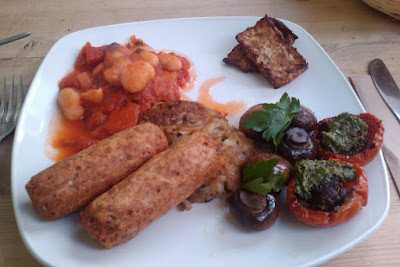 They haven’t lived in their flat very long so I made them a little housewarming present – cookies. These had white chocolate, cranberries and walnuts in and they were super yum. I played with Dreena Burton’s recipe again and I think I changed it up enough so I’ll put the recipe at the end of the post. Dreena’s original chocolate chip recipe is online here though (and it’s AWESOME and really adaptable). 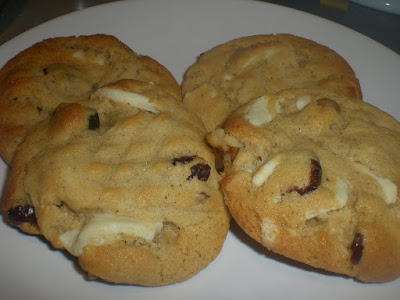 Mum and Dad came over for dinner last week and I made us some nice chunky soup for dinner. It was lovely and I made a massive pot so I could live off leftovers for lunches for a few days. It had butternut squash, turnip, onions, parsnips, red lentils, celeriac and a teeny pinch of chilli flakes. 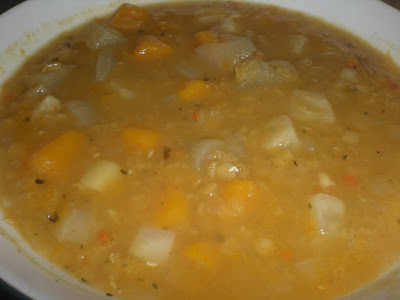 Random dinner last week. I bought this tomato in waitrose that you're meant to eat while it's still green. But as you can see I left it in the fridge a wee bit too long. It was pretty though I thought. I roasted half of it (the other half went into the aforementioned soup!). I had it with some firm polenta with sweetcorn in and some roasted brussels and celeriac. 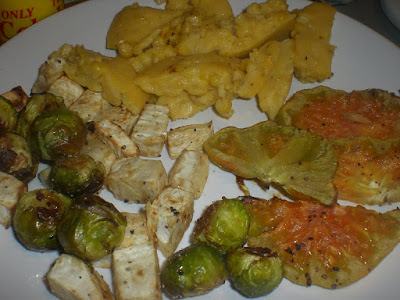 These were a birthday present for my friend last weekend. Coconut cupcakes with raspberries. I poked a hole in them and put some mushed raspberry & cointreau in, then piped coconut buttercream on before decorating with a fresh razza. They were yummy but fell apart a bit, probably because of the extra liquid from the raspberries. I'm working on this recipe, they'll be awesome one day! 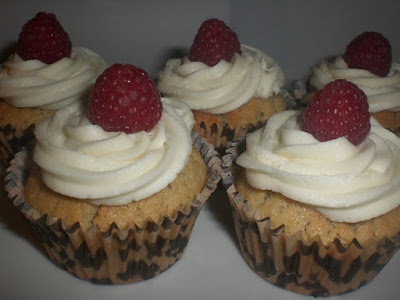 This was last friday's dinner. Rachael Ray made these german style potato wedges which looked great, aside from being cooked in bacon fat. Blech. So for mine, I doused the potatoes in cider vinegar and sprinkled on some sugar and bacon salt! I found bacon salt in the american sweet shop not far from where I live. The plain one has milk in but the one with pepper is vegan. So it took care of the bacon flavour, salt and pepper! Triple threat!! They were pretty good, maybe I should have sprinkled some bacos in after they'd done cooking, or then maybe that would be gross??? The burger on the side is a Frys Chicken Style burger, my new favourite thing - and that comes from a hater of most fake meats! 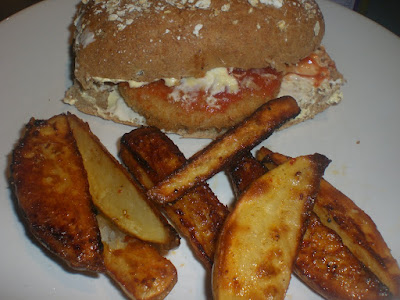 Another random dinner. Remember the tempeh stuffing balls from last time? I had some leftover tempeh and decided to try my hand at a white chilli. It was good but not quite right, so I need to work on it before I post the recipe. 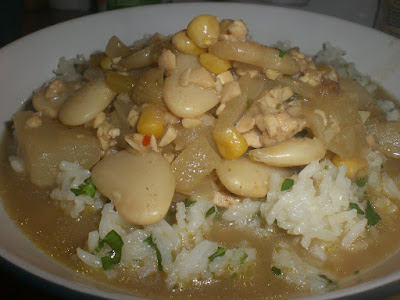 Whisk together the dry ingredients (I always sieve the baking powder and soda through a little tea strainer as you can get lumps of soda otherwise in your cookie). Add the cranberries and walnuts. Smash up the buttons a bit, but don't make them too small - some big pieces are good! Add to the dry ingredients and give it all a good mix.

Whisk together the wet ingredients (be patient, it'll happen!) and then pour into the dry. Mix with a fork till you can't anymore then get your hand in and mix it till it comes together in a ball of dough.

Pull off pieces about a rounded tbsp (walnut sort of size) and roll into a ball. Space them apart on a cookie sheet lined with parchment. Then wet a fork and press it lightly one way then another, for cross-hatches! Bake for 5-6 minutes for a chewy cookie, 7-8 for crispier. (dreena's recipe says 10 or 11 but that's for bigger cookies). Leave them 5 minutes on the sheet to firm up then transfer to a wire rack to cool completely.