Well I'm making up for it with lots of pics. Starting with pictures from a recent PPK meet up. I was in Brighton to see Ash playing at Concorde 2 that night (they were freaking awesome by the way) and all the food in the day made this one brilliant weekend.

It was supposed to be in the park but the weather was decidedly dodgy, so JoJo graciously hosted for us. But, as if you didn't already know, I'm a bad blogger and I forgot my camera, so I took a pic of my (first!) plate with my phone. I've totally forgotten who made what so here's a vague outline. Cheesey feet crackers! hehe they were awesome, carrot tart which was delicious, salad with pasta / seitan sausages and rocket, sausage rolls, potato wedges with barbecue sauce, rice salad, spanakopita (sp?) and home made bread. All delicious. The potato wedges, barbecue sauce and rice were my contributions. 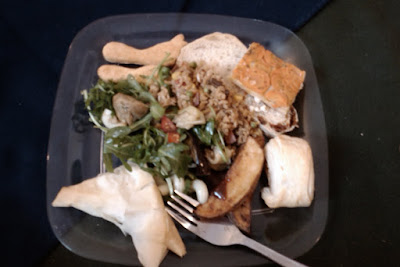 Those rocky road cookies were so good - you're gonna see them again in a couple of pics' time! 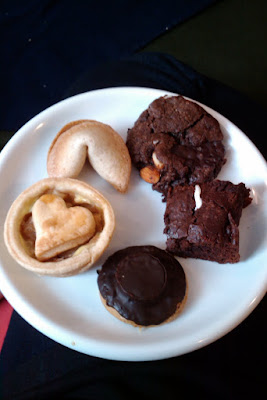 A close up of my rice salad that I took just after I made it. Sauteed peppers, onions, mushrooms, redwoods bacon style rashers, sweetcorn and peas with brown basmati rice. 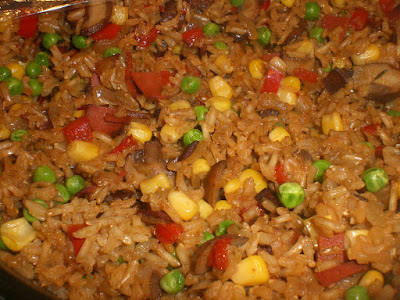 And my pies. Totally cheated on these - I cooked up some granny smith apples with sugar and spices and then rolled out shop bought shortcrust pastry and cut them out and put them in muffin tins. A spoonful of alpro soya custard and apple mixture with a cute heart of pastry on top and a sprinkle of sugar and they were ready for the oven. 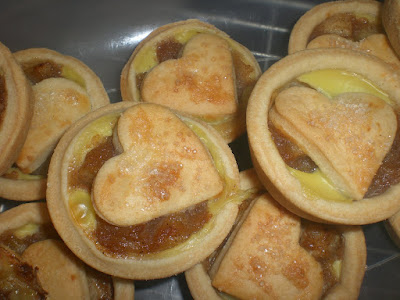 I had som pastry left and I love pastry so hate to waste it, so I made a turnover with the leftover apples and custar. It came out weird looking but yummy. 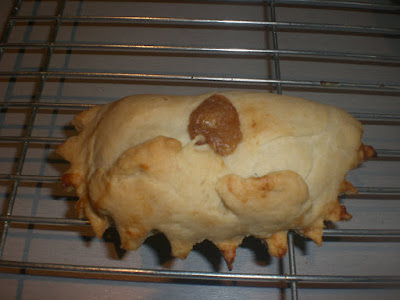 The next morning, my friend and I were planning to go to Wai Kika Moo Kau for a veg brekkie but as my bro and his girlfriend came with us, we went across the road to Bubble Kitschen. They serve a vegan breakfast alongside their vegetarian and omni versions. It was MASSIVE and the coffee was pretty bad but the breakfast was pretty damn good! 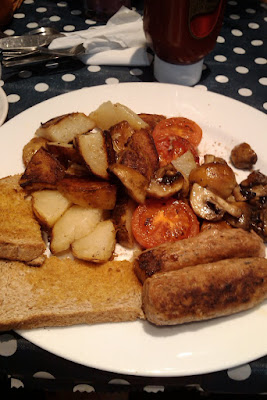 Onto some randomness. Dinner the other night. I saw Levi Roots make pumpkin rice the other night and thought it looked pretty good. And I had a butternut squish (hehe) in the fridge already so I made my own version. I also had some orange pepper and sweetcorn leftover in the fridge so I chucked them in too. It was good but I think I need to play around with the spices before I post the recipe. I just had it with some steamed tenderstem broccoli. 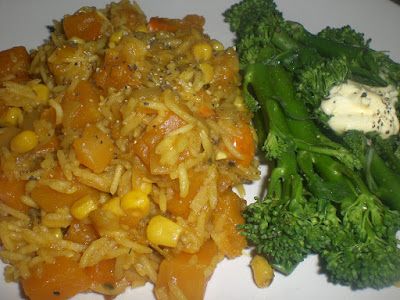 I made some seitan sausages on Sunday and for a quick dinner I blitzed up some tomatoes and mixed them with wholewheat penne, sugar snaps, asparagus (HURRAH for UK asparagus season being in swing!!), cannellini beans and some herbs and spices. Oh and one of my sausages - pretty good for a quick dinner. 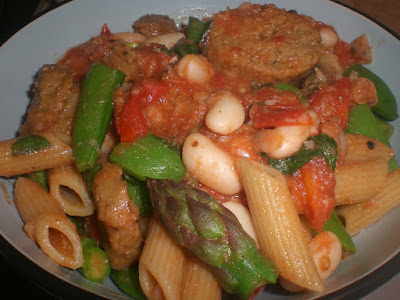 I made the sausages because I fancied sausage and mash. So that's what I had sunday, with onion gravy. YUM. 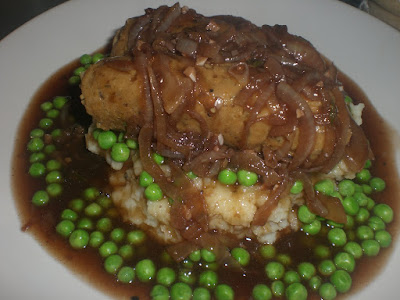 Remember those rocky road cookies I mentioned before - well I dreamed about them for a week after having them in Brighton. So I dug out Vegan Cookies Invade Your Cookie Jar and made a batch. Me and my friends ate some when they were round for dinner and I made them take a load home so I didn't eat the whole batch myself. I froze some because I was in danger of eating them all. They are SO good! My friend's hubby who I sent some home with my friend for, said they're my best baked good yet, so thanks Isa & Terry!! I made sure to only cook them the minimum time so they were fudgy and soft. If you have this book you gotta make them!! 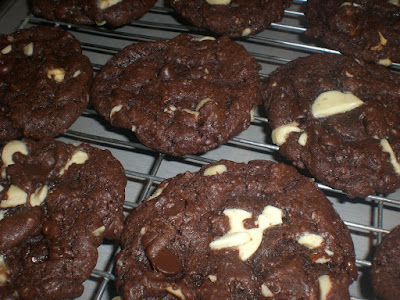 Here's the dough, I had to seriously restrain myself from just eating all the dough straight out the bowl. 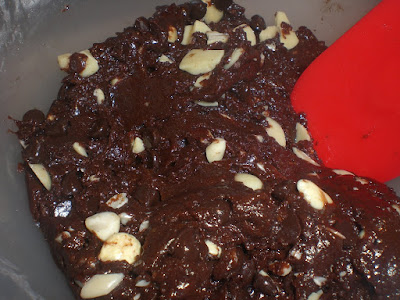 When I was in Brighton I went into Infinity to buy some Tempeh and all they had was the one with sea vegetables in. Boo, but I bought one anyway! And thought I'd make the chesapeake tempeh cakes from Vegan Brunch. The only complaint I had with these is not to do with Isa's recipe - it's my own fault - I added some old bay seasoning because I found it in the American shop near where I live. And so they pretty much just tasted of celery - and I don't like celery! Dummy. So I'm going to try making them again without the old bay and I think they are going to be awesome.

I made a potato waffle to go with them. I haven't got these quite right yet but I'm working on it and I will post the recipe as soon as I have it right! 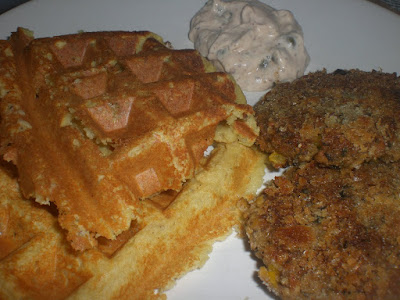 This was a quinoa pudding that I got the recipe for from the GI Vegetarian cookbook. It was spectacularly underwhelming. But I like the idea of it - so I'm going to play with it and report back next time! 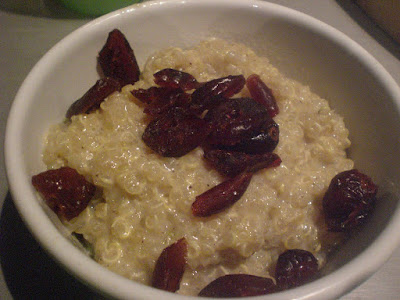 Simple dinner of rice salad and some tempeh that I baked with a bit of all purpose seasoning sprinkled on it and had in a big floury roll with barbecue sauce. yummy. 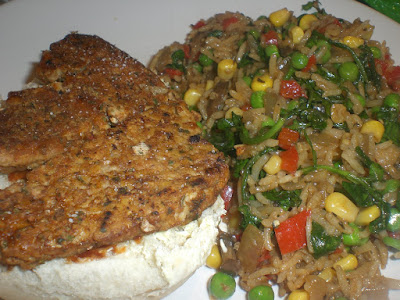 This was a recipe I got off sparkpeople for tempeh carrot salad. It had ginger and orzo pasta in in. I changed it a bit by adding some lime juice and adding shredded cabbage and sugar snaps. It was really really good but I think it needed more tempeh. I'd make it again definitely. 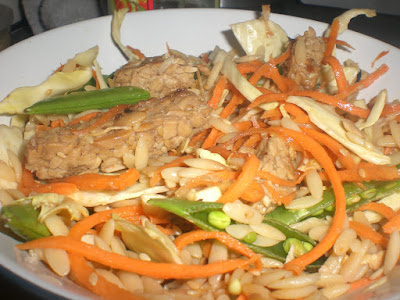 And finally, a quick dinner of spaghetti bolognaise - made with linda mccartney mince and sprinkled with nooch. Yum. 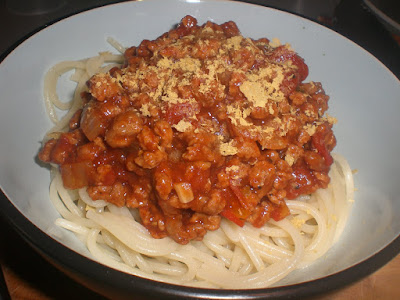 I will try not to leave it so long next time.