You know what I say when I feel like swearing? Fudge!

Been a bad blogger again haven't I!! Well I won't bore you with yakety yak, I'll just get on with pics of some of my recent eats. Starting with Wednesday night's dinner: Roasted tofu and stuffing balls (just packet mix), steamed cabbage, mash and roasty carrots. Sunday lunch on a wednesday night, perfect! 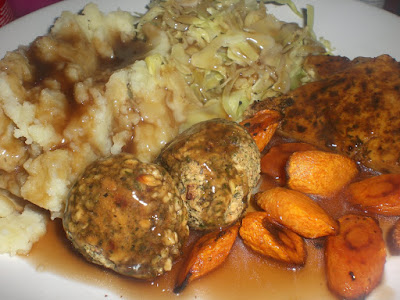 This was a really quick meal. I just sprayed each side of some tofu triangles with a bit of low sodium soy sauce then rubbed some 5 spice powder in and baked it for 30 mins, flipping once. The noodles were just straight to wok rice noodles, red peppers, sliced up mange touts and carrots. I made a sauce with a little peanut butter, lemon juice, soy and 5 spice. Really quick and tasty. 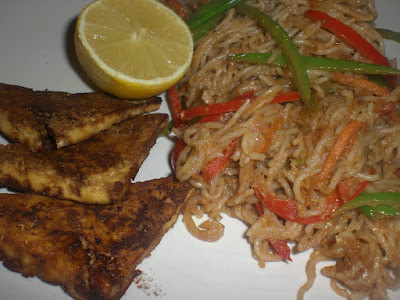 This one took a bit longer, but not that much. I was in the mood for moroccan-inspired foodz. So I made a veggie tagine that had all sorts in: tofu, courgettes, red peppers, onions, brown lentils, tomatoes, apricots, spices and a bit of agave. The couscous was simple - veggie stock, lemon zest and raisins. 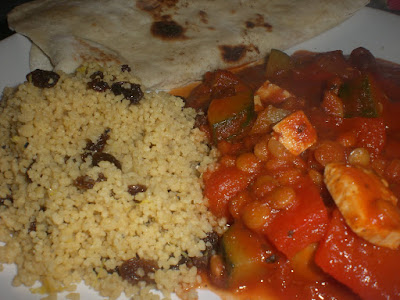 But the real star were the flatbreads that I made to go with them. I just eyeballed everything so don't have a recipe really but next time I'll write it down so I can post it. 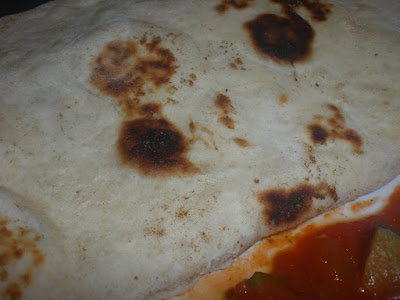 This was another random dinner. I was not feeling all that inspired and hadn't been food shopping so I just pulled out whatever was in the fridge and that was basically onions, mushrooms and peas! I cooked them up and added some cashew cream (I just whizzed up some cashews and water until they were as smoothe as my processor would get them) and a tonne of nooch. On wholewheat spaghetti with some smoked tofu on the side. Not bad for an uninspired night. 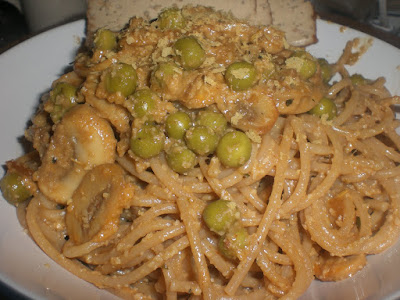 Lastly, last Friday was my dad's birthday and I decided to make cupcakes from a different book than vegan cupcakes take over the world. No disrespect to that book, it's probably my favourite book ever, I just wanted something different. So I made the caramel apple spice cupcakes with penuche frosting from Veganomicon. I'm glad I did cuz they were really REALLY good!!

I found the frosting a bit hard to work with as it set up pretty quick but I got it on as good as I can. So they were not perfect - but it is home cooking after all - not bakery perfection. 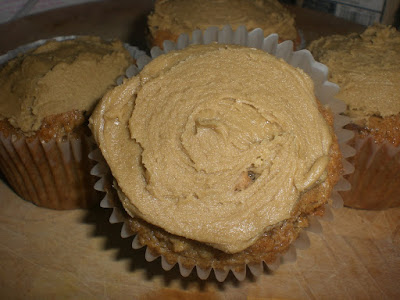 The frosting made loads and it was super sweet so I didn't want to pile it all on. I really only used about a third of it on the cupcakes (which I only got 11 out of, despite it saying there'd probably be leftover batter - I guess I filled the cases too much!).

So I figured that instead of freezing yet another load of leftover frosting I'd make into fudge, as it was setting up that way already anyway. So I stired in about 1/3 cup of creamy peanut butter over a low heat to get it to mix, then put it into a plastic food box and left it to set at room temp. Once set (an hr or so later) I cut it into chunks. It was SOOOOO YUMMYYYY!!! For realz. My friends and I ate some of it with our drinks before we went out Friday night.

If you have a go at this, you might want to refrigerate it when you're done pigging out (trust me it's sweet so unless you can tolerate a crap tonne of sugar, you won't be able to eat that much of it in one sitting!). It will stay in shape at room temp but melts a little. 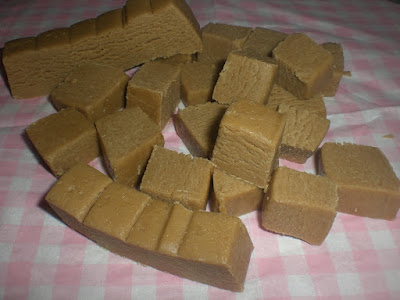 That's all for now, I'll try and not leave it so long next time!

(PS: Post title inspired by this scene in Supernatural. Hehe I Love Dean!!)
Posted by Sal - AlienOnToast at 15:17