So I missed the last couple of days of MoFo and I haven't blogged for two weeks!! Gah, sorry. But I do have a recipe to make up for it, even if it isn't my own!

I'll jump right in with today's dinner. I bought some giant wholewheat couscous and I tried it out today - it's good stuff! I sauteed some mushrooms and shallots with some garlic. I crushed up some cumin & coriander seeds and added those along with about 1/2 a tsp of chipotles in adobo sauce (I got a tin in my PPK swap and I whizzed them up in my food processor so I could store it in the fridge and use them as a paste). I also added a teeny bit of liquid smoke to accentuate the smoky flavour. Good stuff. To go with it was some steamed cabbage and some baked tofu that I just sprayed with Braggs and rubbed with some spices (just a shop bought chicken seasoning!). Also some bread - I will come back to that bread! 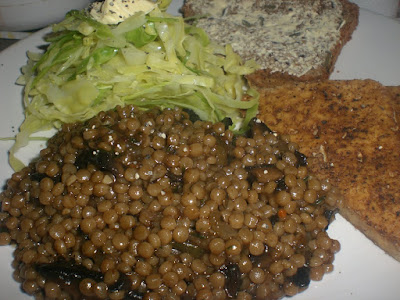 Sunday I had a big crockpot full of chickpeas I'd put on before I went to bed Saturday night so I knew the soup I wanted to make was the Bodacious Bean & Barley Soup from Garden of Vegan - I love that soup so much. 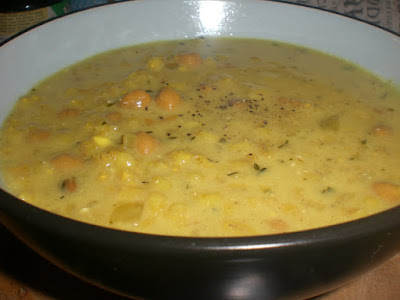 With it, I made Rachel Allen's Wholewheat Oat & Seed Bread. I haven't got a cut pic (aside from a not great one in the first pic) but there's still some left so maybe you'll see it in the next post. 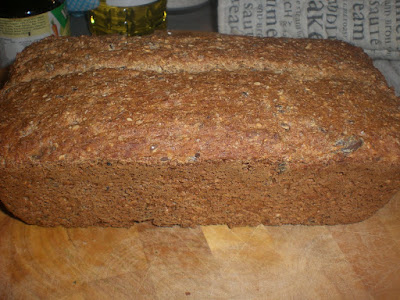 OK so this recipe isn't mine, it's Rachel Allen's. But I'm posting it here because it was on her TV programme and isn't in any of her books apparently. Also, for some weird reason UKTV food haven't put the recipe on the website, which is unusual. Rachel Allen is the shizzle - and so is this bread, so here it is. It's so easy you gotta give it a go. It's really REALLY good!! No kneading people - NO KNEADING!!!

Measure 100ml of warm water and add the agave. Stir and add the yeast, stir again then leave for a few minutes until the yeast begins to work (you want to see a cm or so of bubbles on top of the water).

While waiting for the yeast to work mix all the dry ingredients into a bowl and mix well with your hands. When yeast is ready top it up with the other 250mls of warm water and add the sunflower oil. Stir, then make a well in the centre of the dry ingredients and add most of the liquid. Using your fingers bring it all together, it needs to be quite ‘sloppy’. It should look like you need to add more flour - but you don't!! (Depending on how the mix comes together, add more of the liquid if needed. If all the liquid is used and it’s still not sloppy, add a further 50-75mls of warm water - I had to add more.)

Empty into the loaf tin, give a little shake to even out then with a knife, score down the length of the loaf in the centre (apparently this prevents it cracking). If you like, sprinkle more mixed seeds on the top (I didn't), cover with a clean tea towel then leave in a warm (not hot) place to rise. This takes between 10 & 30 mins. Once risen to the top of the tin, place in the mid to lower part of the preheated oven and bake for approximately one hour.


Friday night's dinner and I wanted chips. I was so tempted to stop at the chippy but I wanted to stick to my diet so I resisted. So I made oven chips instead and they are just as good as deep fried ones but way healthier. I just cut the potato up into chips, sprayed them with a little olive oil and then baked them at 200C for about 30 minutes, flipping once. They stuck a little because I didn't add too much oil but not enough to be an issue. Once done, give them a good shake of sea salt. YUM. I had some smoked tofu and mushy peas with them. 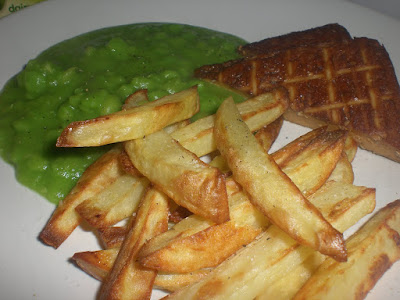 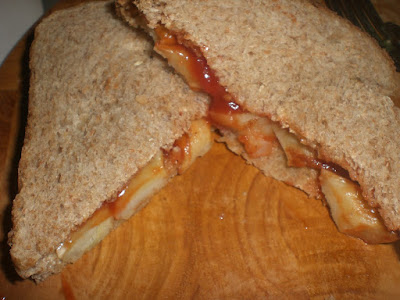