OK I'm not broke but I do spend WAY too much money on makeup. 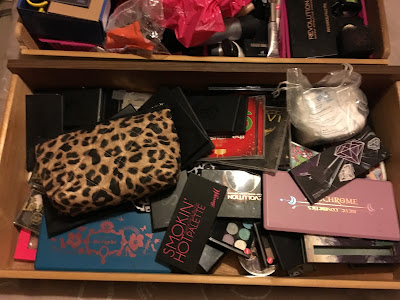 I had a clear-out at Christmas and had literally a black sack full of stuff. Some was too old and crap to be donated but there was a giant carrier bag full of donatable stuff, which I gave to some very happy teenage girls (our friends' daughters). The pic above is one of about 4 from the clear-out I had 2 years ago!

Even after said clear-out, I have more makeup than one human ever needs. Now that I'm married ... nope, nope can't do it. Can't pretend that getting married made me a grown up!

OK so now I have other priorities, like saving for a new place to live, I can no longer spend all my disposable income on makeup. So I'm putting myself on a no-buy.

Also I binge-watched all of Kimberley Clark's anti-hauls and it really did hammer home how I'm guilty of buying stuff just for the sake of having it, even if it ends up just sitting in a drawer! I really recommend these videos, even if only for entertainment value. Kimberley is smart and hilarious!

Obviously as someone who likes making youtube videos* this is a bit of a problem, as I won't have a tonne of new stuff to review for you, so the content will have to change a bit to use up stuff I already have.

So I'm allowing myself to buy essentials such as deodorant and toothpaste of course. And things like concealer when they run out, I'll replace (and mascara as that should be replaced every few months). But I'm really not going to need a new foundation, eyeshadows or lip products for some time! I'm also not cancelling my Vegan Kind box for now.

So is anyone else on a no buy?

*youtube have just demonitised my channel for not having enough subscribers. They're doing this to all small youtubers (less than 1000 subscribers) so I'm not alone and it's not like I'm going to miss the 20p I'll probably make from the ads haha. But it is a slap in the face! So anyway, if you feel like it, please subscribe to my channel because youtube being dicks aside, I love doing it and am planning to continue and also to get more regular with my posting schedule.