Phew has it ever been hot the last week? It's been raining a bit today but seriously, the last week has been so freakin hot. It's gorgeous but not pleasant when you're trying to get some sleep in the hottest flat in the WORLD.

Friday we went to see Take That. I was soooo in love with them from the age of about 12 till about 17 and me & my friends used to draw take that signs on every page of our homework diaries and sign letters Sarah Owen (me) and Emma Williams (my best mate) because we were going to marry Mark & Robbie, respectively. HAHAHAHAHA. I really wish I could find the photo of my room when I was 14, so I could scan it - my mum can attest to this, there was no wall space visible through the posters. I even had a poster on the ceiling! But I digress. They were amazing and the show was visually stunning as well. Plus they all seem to have got hotter with age!!


But enough of that, back to the food. I didn't realise I had so many pictures on my camera that I hadn't posted!

I'll start with breakfast from yesterday. I bought some strawberries last time I went shopping and they were so good, I made some pancakes with them. Also, Bianca posted about Pbu, I was intreagued. So I went to the blog in question and got the recipe and I gotta tell you - this stuff is so freakin rad. I'd just made some fresh almond milk so the timing was perfect. I drizzled it over my pancakes and it was heaven. 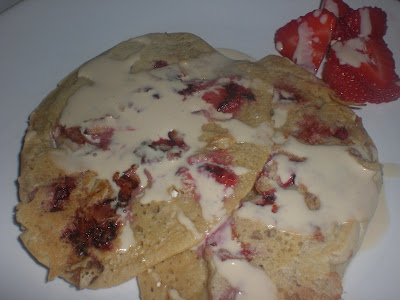 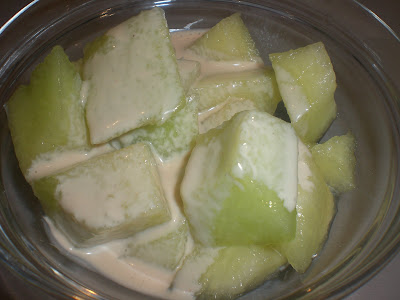 Last night when I got back from body pump I was starving, so wanted something quick. I went for quick pea soup again, like last week. 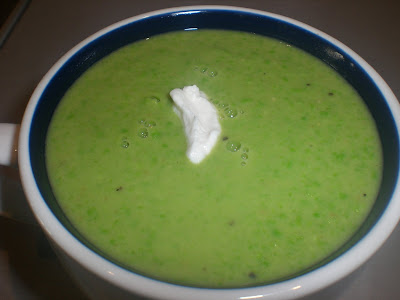 I was gonna have a sarnie with it but found that my bread was mouldy - boo. But I had already made some hummus in my swanky new mini-chopper... isn't it dinky & cute??? It is also awesome. I broke the bowl for the mini-processor that came with my stick blender, so bought this to replace it and it's 10 times easier to clean and waayyyy more powerful. I took the pic with my hand in to show you how small he is! I haven't named him yet though. 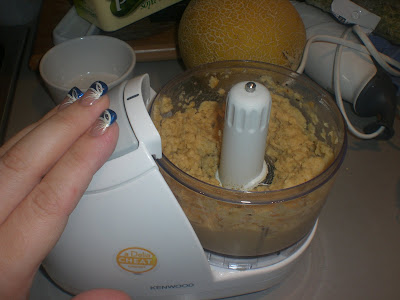 So in the absence of bread, boo, I spread some hummus on corn thins. These taste pretty much like rice cakes and are not bad. They break REALLY easily though! 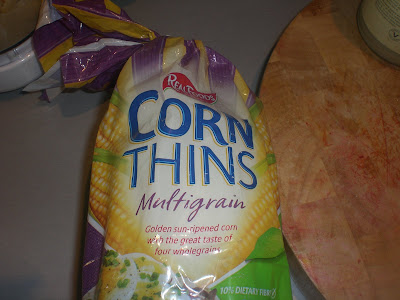 Yesterday I made some yummy strawb/almond muffins. Damn I've just remember that I didn't bring one to work with me today! Dumbass. They were made with wholemeal spelt flour, smashed up almonds, the almond meal leftover from making my almond milk and some strawberries. Recipe at the bottom of the post. 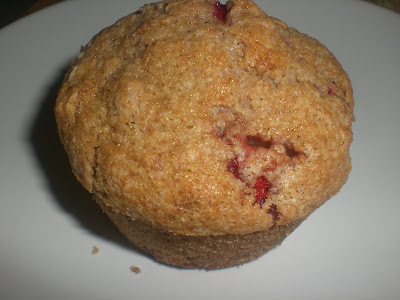 This was lunch yesterday, rice noodles, veggies and peanut dressing with some sesame seeds on top. Easy, fast and tasty, but not all that imaginitive. Saturday, me & my friends and their dogs went to the Hale Carnival (a local town) and entered the doggies in the dog show. I was looking after Luke (aka rentadog!), as my friend's other dog is a hyperactive springer and not that easy to control. He didn't win either of his categories and neither did my friend's poodle Maddie, but Duke (aforementioned hyperactive springer!) did win Waggiest Tail!!

I then had a couple of pints of beer and went on the fairground rides. Silly Sal, silly! I felt a wee bit sick after the last ride and I also got a touch of sunburn. So when I got home all I wanted to do was eat something fast and fall asleep on the couch! So I picked up some ready made stuff from sainsburys. I got Channa Dahl (sp??), bombay potatoes, mushroom rice, onion bahji and veg samosa. They were ok but nothing to write home about. Plus they were the only vegan options in their take-out range!! 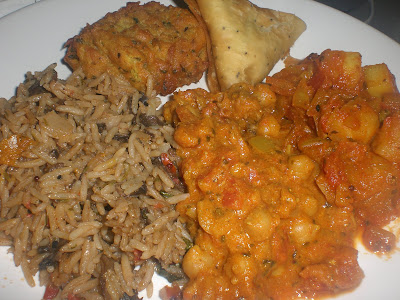 This was saturday's brekkie, a yummy smoothie. I'm really into smoothies at the moment as I can chop up all my fruit the night before and then just throw it in the blender before I run (late) out the door to work. This had strawberries, the yummiest mango I've ever tasted, half a banana, a bit of peanut butter, a teeny squidge of agave and soymilk. It was rad. 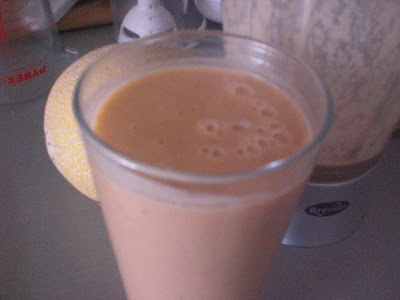 This was another quick meal. A salad made with a tin of cooked spelt wheat, some green beans and other veg on the side. With it I had one of Redwood Foods' new gourmet 1/4 pounders, which I found in the health food shop. They're really nice and wood be great for a barbecue I reckon, although you'd need to handle with a bit of care, as they break up fairly easily. Really quick to cook as well - 6 minutes in total!! 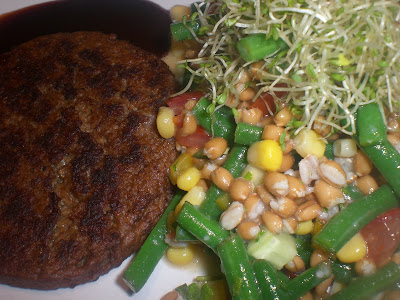 Dessert was strawberries with a bit of leftover soya cream and a sprinkle of sugar. It was Wimbledon week after all!! (Not that I give a rats ass about tennis - but any excuse for strawberries & cream is ok with me.) 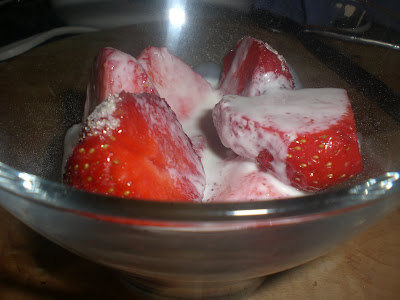 This ugly specimen was actually very delicious. It was some mushroom pate that I made in my cute new mini-chopper! Just mushrooms & onions cooked down for a good long time in a little oil then thrown in the chopper with some thyme & rosemary from my garden, a bit of soya cream and some salt & pepper. Then whizz whizz whizz. Yum on corn thins! 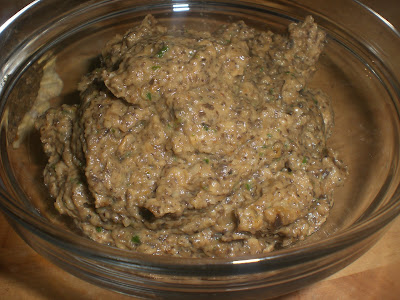 So I have been growning peas on my balcony. My plant is looking pretty much dead now unfortunately. I managed to get a small harvest from it though..... I was so excited! 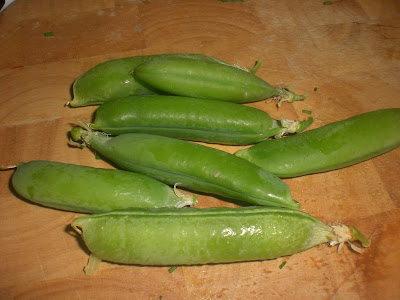 But I was a little disappointed at the amount of peas it yielded. HAHAHAH don't really know what I was expecting. 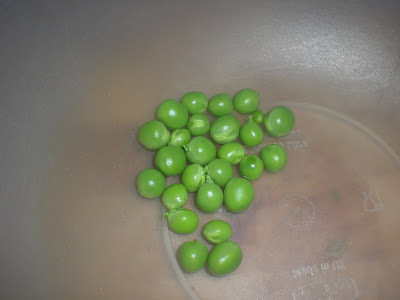 I decided not to cook them and throw them raw into a salad. This was yummy, it had peppers, tomatoes, courgettes and cooked brown rice. I threw in some tofu, made a potato salad and had it with a corn on the cob. SOOO good. 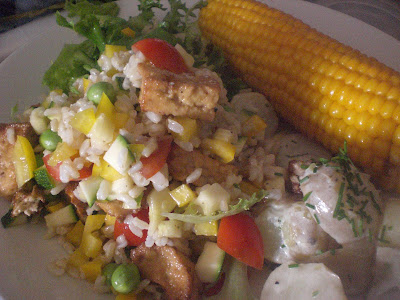 The next day was very similar - leftover rice & potato salads, a quick carrot salad, some chopped up seitan and the other corn on the cob. 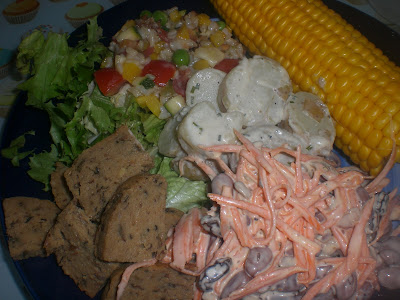 Speaking of seitan, I made some. Jeni's post about baked seitan made me realise I've never tried baking it. So I gave it a go and I really like it!! I used the same recipe I used last time for patties (again, don't have my book with me, but I will get around to posting the recipe soon!), rolled it into a fat sausage and baked it in foil for 45 minutes at 180C. It was so good - I was having it on sandwiches all week last week. 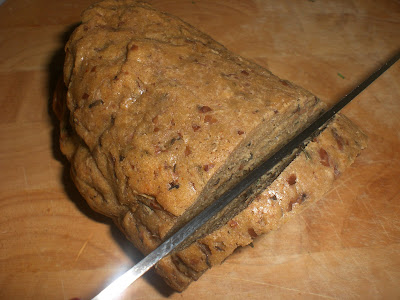 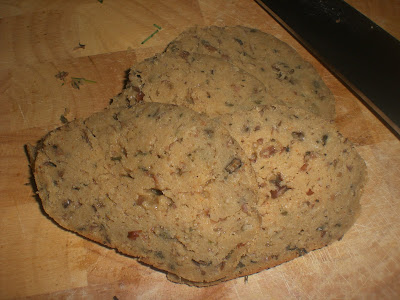 And thrown into a stroganoff (if you're a PPK'er, does stroganoff make you chuckle like a 12 year old too, or is it just me???), with veggies and brown rice. MMMM! 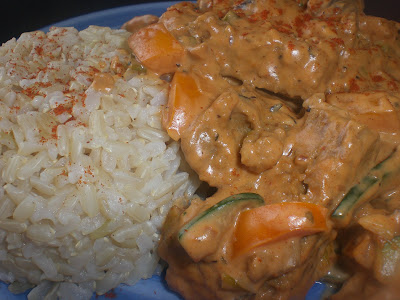 This was breakfast last weekend and was very naughty but oh so good. Porridge with some peanut butter and maple syrup stirred in. Then a few chunks of chocolate added before serving so they go melty. SO good. 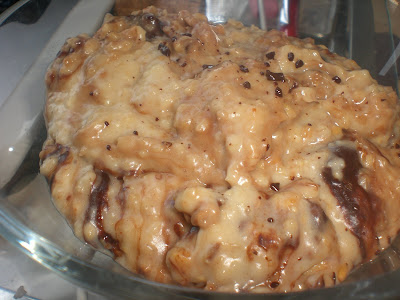 OK lastly a bit of a review. A very lovely lady from Jack Daniels emailed me and asked me if I'd like some samples of JD sauces. I of course said yes and was thrilled when they arrived. There are 4 varieties of their barbecue sauce, 3 of which are vegan; original, full flavour smokey and hot chilli.

Over the last few posts you'll have seen these feature on ribs, tofu and also in this one next to the redwoods burger. They are pretty damn good I have to say.

In all honesty, I don't think there's a huge difference in flavour between all 3, but the hot chilli definitely has a nice little spicy kick to it, which I love. That's my favourite of the 3. They have a very loose texture and so are great for marinading. I still need to try barbecuing some tofu that I've marinated with them.

I was struggling with other flavours clashing or being too strong when I tried to be all fancy pants with them, so decided the best thing would be to try them on something easy - chips! Or baked wedges in my case, so that is what I did.

You can buy the sauces in most supermarkets now and they're definitely worth a go if you like BBQ sauce, especially the hot chilli one! 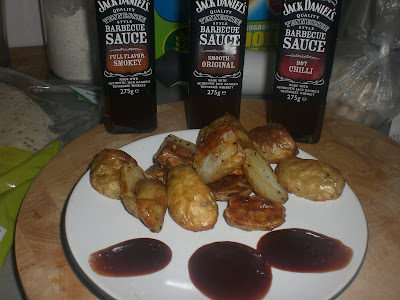 As promised, recipe for the muffins.

Method:
Preheat oven to 180C/350F and spray a 6 hole muffin tin with a little flavourless oil or non-stick spray (or line with paper muffin cases).

Smash or chop up the almonds. Mix the all dry ingredients in a large bowl, making sure to get the almonds and strawbs well coated in the flour mix to avoid them sinking to the bottom.

Whisk together the wet ingredients separately, then pour them into the dry and mix until just combined, don't overmix.

Spoon into muffin tin (about 1/3 cup in each) and bake for 25-30 minutes until a skewer comes out clean. Leave to cool in tin for a good 20 minutes to make it easier to get them out the tin (5 minutes is fine if you used paper cases).