EDIT: so I've just seen my 3 year blogaversary was on the 5th of March!! I thought it was later in the month. I'd better do some belated baking.

So I haven't posted pics in sooooo long and I had WAY more on my camera than I thought I'd taken. Most of them weren't that great so I didn't bother posting them.

Having said that, this first pic kind of sucks, but the food was good so here it is. I made the basic latin (red) tofu from Viva Vegan. I also made the peanut sauce that she suggests as a variation, but I didn't bake the tofu with it on, I just served it on the side. I think the tofu was a little bland so it needed the peanut sauce, but that is probably down to my not very flavourful veggie stock - rather than Terry's recipe. Next time, I'll try it with wine or beer! The peanut sauce was awesome! And the rice was just some simple old savoury rice with onions, a tomato and peas / sweetcorn thrown in. There were meant to be mushrooms too but I forgot them. 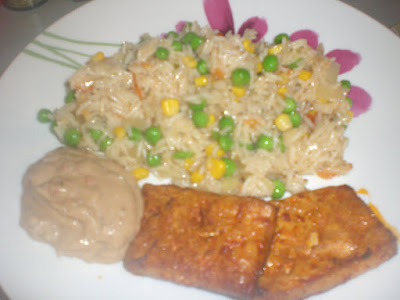 Last week was pancake day! I made some pancakes, they weren't great but they did the job. One with the classic lemon & sugar and one with a bit of Biona vegan chocolate spread. 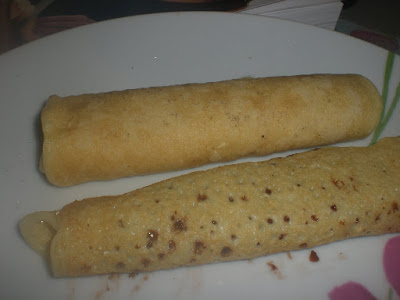 This was a meal I conjurred up last week. I was having lack of inspiration day and was craving dirty cheese tortellini! Seriously, on the rare occasion I crave non-vegan food, it's always mingin shit like that!! hahah. Anyway, I found some aubergine pesto (Sacla brand) in the supermarket, that didn't have any cheese in and looks vegan from the ingredient list. I cooked up some pasta shells then chopped up a tomato and cooked it in a little olive oil, then added a bit of wine, then the pesto and a couple of big handfuls of spinach. It was SO good! I really like that aubergine pesto, it's just a shame it has so much oil and cashews in as it really yanks the calories up! 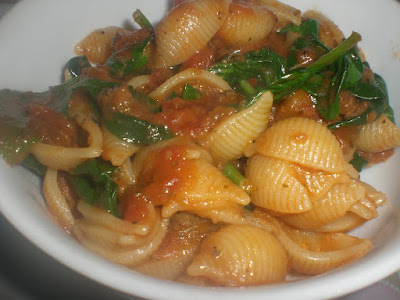 Here is some soup I made last week - carrot & coriander. I take soup to work for lunch pretty much every day, so like to make a bit pot. 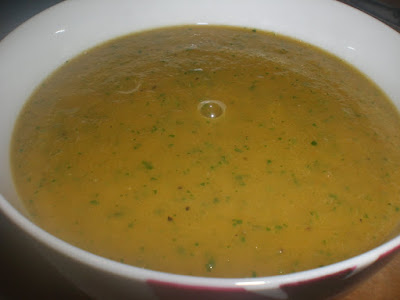 It was nothing special but, the real reason I posted about it, is because here is one of the carrots that went into it..... HEE HEE!!! 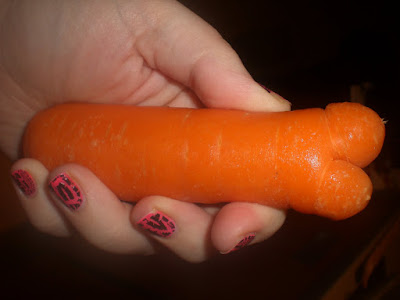 PIZZA!!! My freezer broke down a while back and all the daiya I bought back from Texas defrosted. However I just put it back in the freezer when it was working again and hoped for the best! The bad news is though that I'm moving house next month and I don't think it'll survive another re-freeze, so buh-bye daiya!! :-( This pizza had the aforementined aubergine pesto, fresh tomatoes, sweetcorn and daiya mozz. 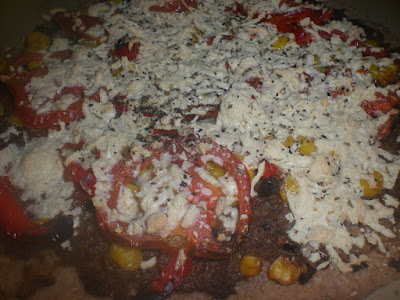 I've made a few things from Isa's latest book, Appetite for Reduction and really like them! This is the Mushroom & Cannelinni bean paprikash. YUM! I had it with plain white rice and a salad. 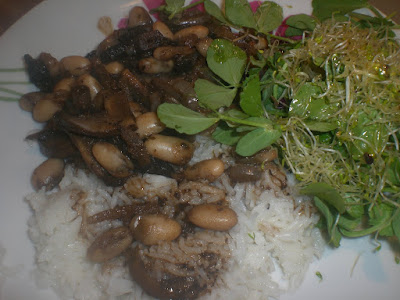 This is the red thai tofu. I made this when a friend was down. The beans are also a recipe from the book, but I forget the name of them. The rice was just basmati rice cooked in half water / half light coconut milk. YUM. I could seriously eat the whole batch of this tofu, it's rad. 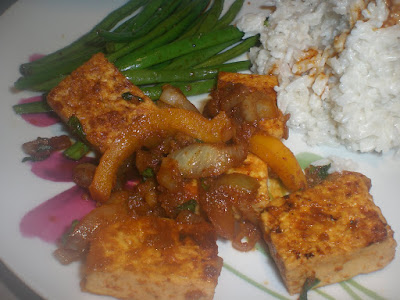 Here is the mushroom / cannellini paprikas again. This is the first time I made it and to go alongside I followed Isa's suggestion and made the scarlet barley. I made this for me and my parents and we all liked it. 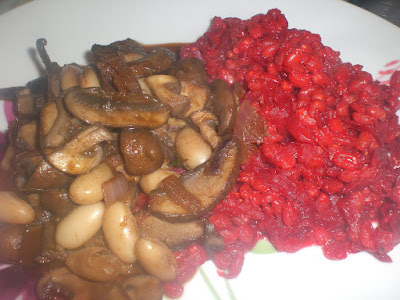 CAKE. I made this one night when my girlies were round. It's the chocolate pudding cake recipe from La Dolce Vegan (I think.... It's one of Sarah K's books anyway). I added in some dried cherries just to up the awesomness. I had mine with soya cream. Such a good cake. AND it's so easy and only uses stuff I always have in the pantry. 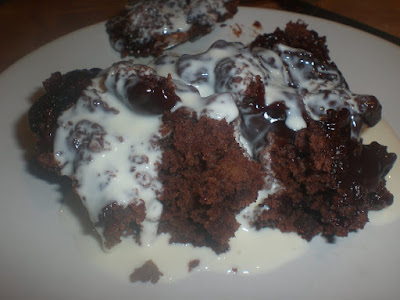 Another recipe from AFR - this is the butternut/kidney bean jamba stew. I LOVE this recipe, I've made it a few times and I always get more servings than it says. It's really easy and it's yummy. My friends really liked it too. 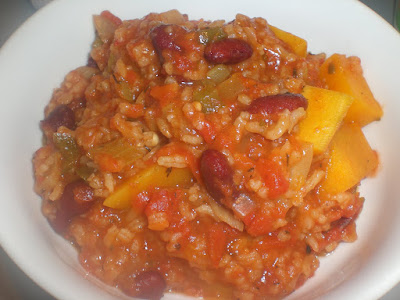 I don't even remember making these - meatballs & sketti!! I think I used a pack of granose burger mix for the meatballs. Yes.. yes I did, it's all coming back to me now. They SUCKED. That burger mix is rotten. Next time I'll stick with a tvp based version or the VCON bean balls. 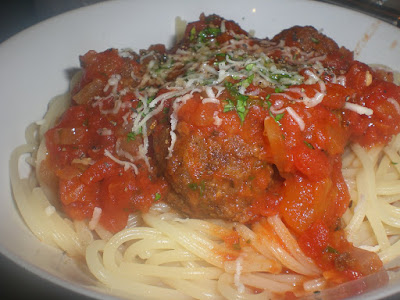 I made some waffles. These were pretty unspectacular and had a banana in the mixture. They were just a bit rubbery but once I poured an eff-tonne of golden syrup on them, they improved somewhat. 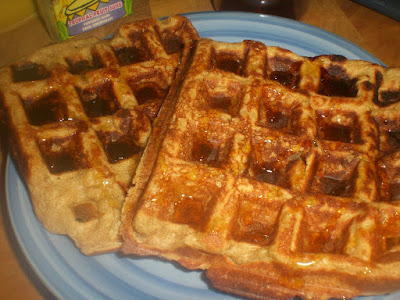 Now I know that you expect baking from me. So here is my christmas baking - yeah I know - it was 3 months ago!! But anyway.... christmas cake. 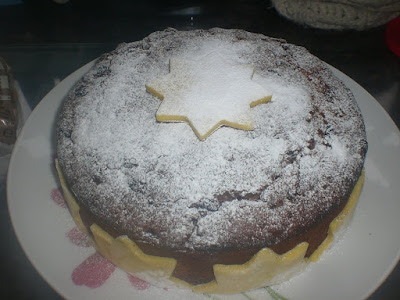 Trifle. I used the VCTOtW vanilla recipe for the sponge and baked it in a swiss roll tin, then i layered it with raspberry jelly made from the vegan jelly crystals you can buy in holland & barrett. Then a carton of alpro custard, topped with a carton of whipped soyatoo and a bunch of sprinkles and almonds. YUMMY. 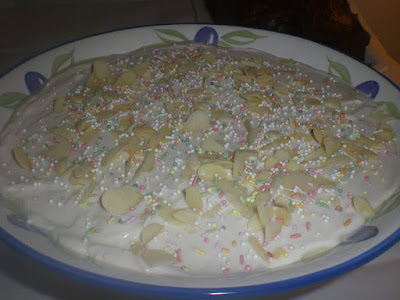 Here is our traditional chocolate log (or as my bro and I childishly call it - poo log!). 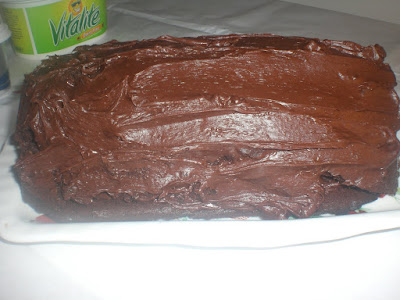 And some candy cane cupcakes. These were really for my friend's hubby's birthday but we ate some as well at dinner, the last time we saw each other before xmas. They had minty frosting with crushed candy canes and edible glitter! 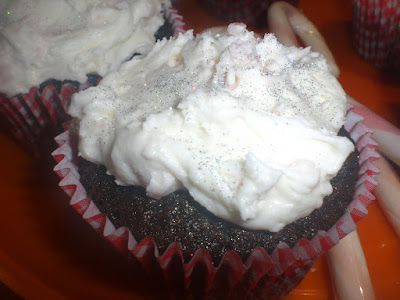 And cherry almond cookies (from Vegan Cookies invade your cookie jar). I made these as xmas gifts for a couple of workmates - they went down very well. My workmates other half (who loves cooking/baking) asked how I got them 'like that' as he says his biccies always dry out. Vegan cookies FTW!! 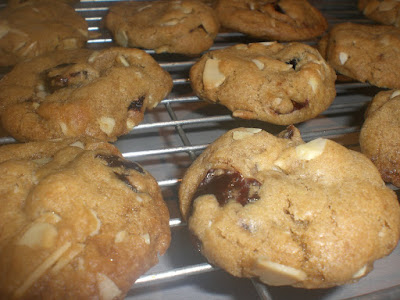 That's all for now. I'll try not to leave it so long next day.

Man, have I got some catching up to do on all your blogs tonight!!