Following on from my post earlier in the week, here is the rest of the (noteworthy) food from the Festive break.

Simon did some wombling about and found a pub in Winchester called the Golden Lion, that offer a vegan menu. So we braved the rain and the hideous M3 and went for a meal there with my parents.

I started with the spring rolls (sorry for dark pics, the lighting wasn't great). These came with hoisin sauce and they were lovely and crunchy. 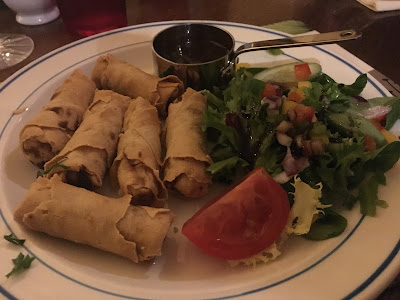 Simon got a vegan starter too, so we could share! :) He got the garlic mushrooms, which were really good too. 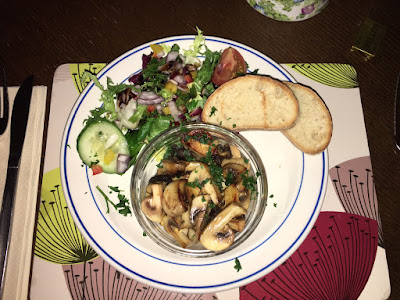 For the main I picked the cottage pie. probably less saucey than I'd have made it, but it was still good. Lots of nice chunky veg and it came with even more veg and some gravy! 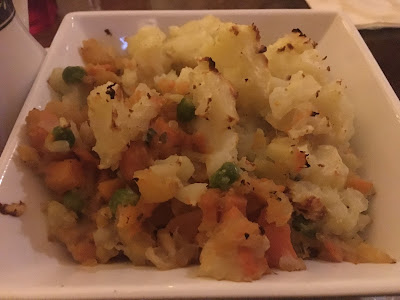 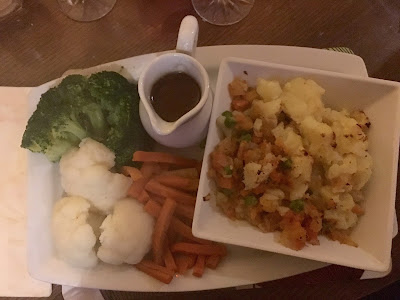 We were too full for dessert but we will definitely be going back. It is a lovely pub, with friendly staff and nice vegan options. Definitely worth a visit if you're round that area!

One morning, I fancied doing a fry up and remembered I had bought some V Pud in the vegan store last time I was there. In my meat eating days I was a big fan of the black pud!

It was really hard to cut as it was so soft, so I ended up kind of smooshing it into patties. Looks a bit like poop doesn't it! Sorry! It does though. 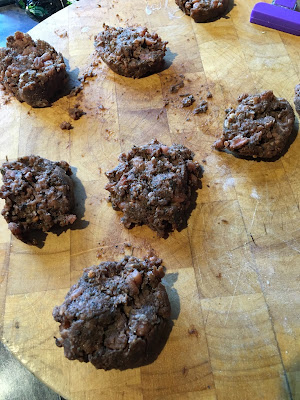 I was still excited to try it though, but my excitement was short lived. It's HORRIBLE! It had a minty taste to it. It was so weird I just couldn't taste anything except minty, mentholy yukkiness. Maybe without whatever the offending ingredient was, this would be good? I don't know, but for now, it's a fail. 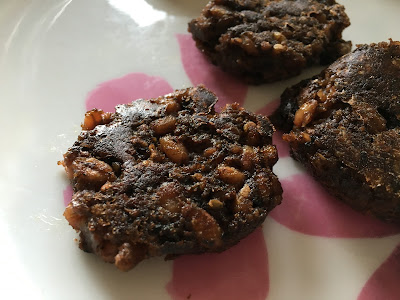 New Year's Eve. We had a relatively quiet one, staying in and watching some TV and playing a couple of games.  Food-wise we all picked a course. My mum did the starter; she made souffles for the non vegans so I had fancy hummus (really good hummus!) and bread. 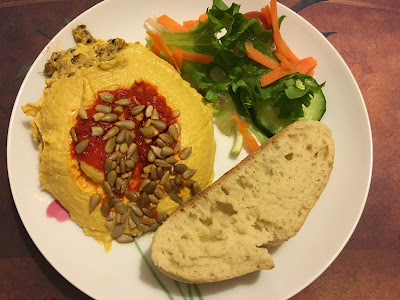 My brother did the main. For the meat eaters he made a beef wellington* and I got a vegan sweet potato/mushroom/pinenut version and it was delicious. I will try and find out what recipe he used and steal it because I'll be making it again. This course was the winner for me! 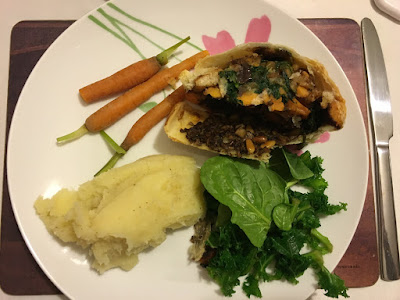 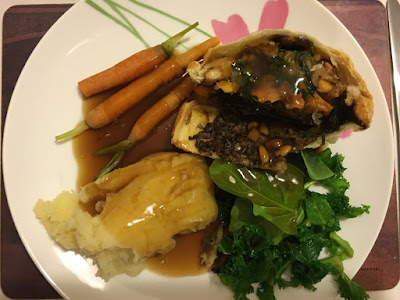 Unsurprisingly I got dessert. I messed with one of the cheesecake recipes in Vegan Pie in the Sky, replacing the banana with peanut butter and adding in vegan baileys as the liquid instead of coconut oil. It was good! I made an oreo base for it to go on and then drizzled it with chocolate and sprinkled some crushed oreos over. The only criticism of this was that the base was a bit tough, I shouldn't have bothered pre-cooking it! 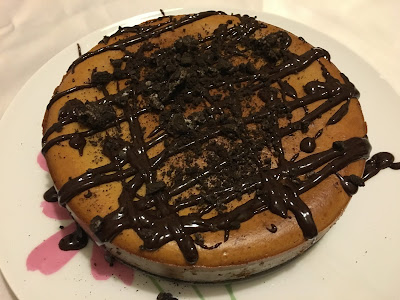 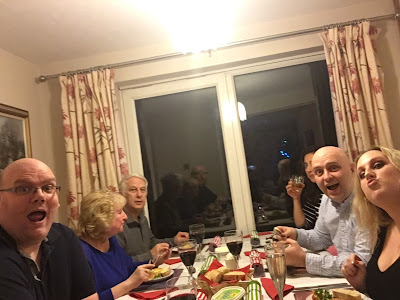 Crackers. On NYE. Really Mum? yep, had to wear a hat, again! 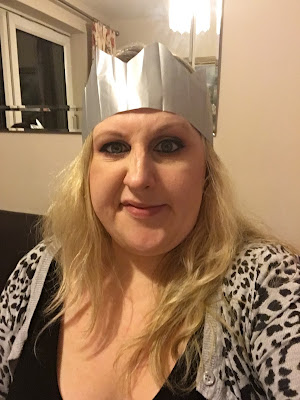 So on New Year's Day, to celebrate 8 years of veganism for me, we were gonna go to the Alto Lounge in Reading. However, we didn't manage to get there. But we did go the next day (which according to Time Hop, we did on the 2nd of January last year too! haha).


They've updated their vegan menu, I was pretty excited by that! 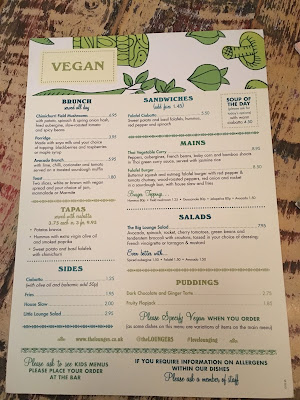 I got a peanut butter latte, as always! 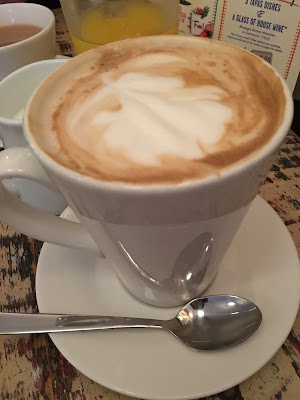 And the chimichurri mushrooms breakfast. Which had fried potatos and spinach. I even ate the beans which is weird because I'm a bean hater! But these had some chilli in and were lovely. 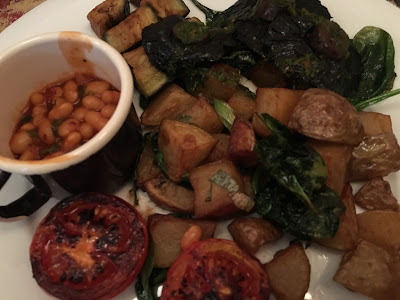 And some extra bread cuz I'm a fatty boom batty! 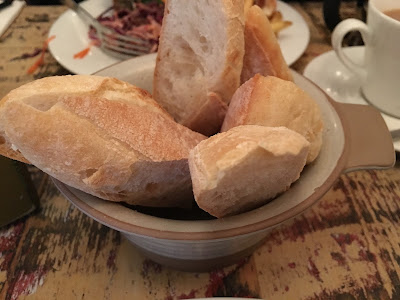 Later that day I started to feel a bit crap and thought I was coming down with flu. So I dosed myself up on cold and flu tablets and went to bed for a nap. Then Simon went out and got us Chinese food because he is awesome. This is vegetarian singapore noodles, minus the egg, tofu in black bean sauce, spring rolls and extra satay sauce. Yummerzz. We ate it in bed, watching Harry Potter, because we are filthy animals. 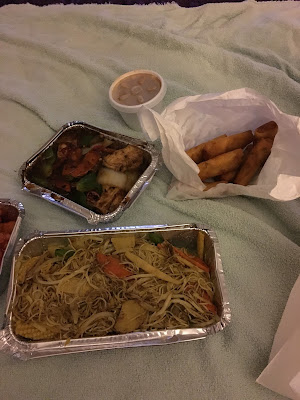 And then on Sunday, I ate this, because my diet started Monday. Boo! 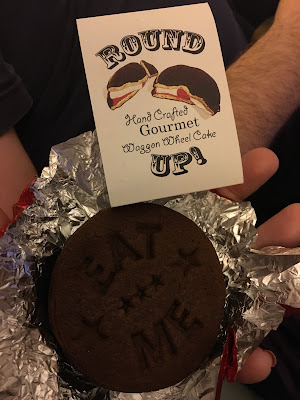 PS: do you guys like my new header? Becs of the very awesome Daft Doodles designed for me and I think it's SO rad!!
Posted by Sal - AlienOnToast at 12:26