You'd be forgiven for thinking that buying Batiste is safe, as their cans have this on the side, but it seems that this labelling is misleading! 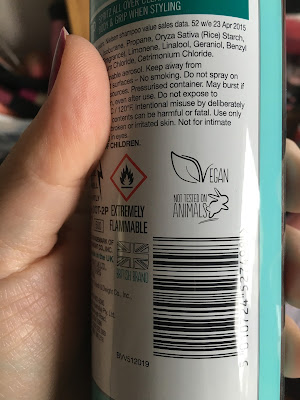 Those of you that do not support cruelty free companies owned by a non cruelty free parent probably already avoid them, as their parent company (Church & Dwight) are not cruelty free.

However, for those that are ok with the parent company thing, Batiste has always been seen as a good option. Despite their labelling, there's been a couple of rumours lately that they actually sell Batiste in China and due to the mandatory testing laws there*, they cannot be considered as cruelty free.

I have sent several emails and facebook messages and received a number of vague responses of 'we don't test, except where required by law' or 'we can't help you as we only deal with UK distribution' and other equally annoying responses.

I have flat out asked if they sell in China and have not had confirmation; I wanted to be able to provide a screenshot. However, a couple of people on some of the cruelty free makeup facebook groups have said they've been told by Batiste that they sell in China.

So basically, their inability to answer the question makes me think they're super shady and the fact that others have been told they sell in chain means that I no longer trust their labelling. So I'm taking them off my cruelty free list and will no longer be purchasing them unless I receive confirmation that they do NOT sell in China (in which case I'll do a happy dance and then update this post!).

EDIT: JAN 2017 - I found this article (LINK) which basically confirms they DO sell in China. So... bye Felicia!

Let the search for a new dry shampoo commence! I've reached out to the company that make Colab to check if they are vegan and will report back!!

*For more info on the laws regarding China, check out this brilliant post by Logical Harmony!
Posted by Sal - AlienOnToast at 14:36