This week I have been making up meal plans and sticking to them like a good girl and a couple of ideas I had worked really well. So that means I have 2 recipes to share today.

Firstly - this is one that I've been thinking of for a while. I was in the supermarket a while back on the lookout for some falafel and I saw carrot falafels! Of course they were not vegan, so I thought screw you Waitrose - screw you in the ear! I shall make my own. And I did. And they were rad. I was planning to serve them on pittas with yoghurt sauce, but the supermarket ran out of pittas - seriously, how do you run out of pittas??? So I went with a salad instead which would normally mean I'd be hungry again within an hour, but I wasn't. 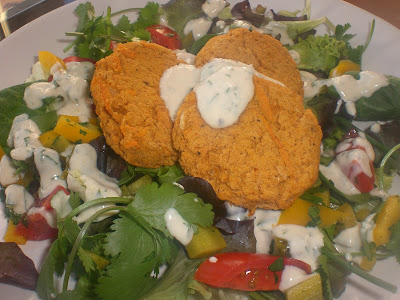 Put the first stage ingredients into the food processor and blend until pretty much smooth. Transfer to a bowl and stir in the other ingredients, mixing well to combine. It should be a pretty soft dough.

Take a rounded tbsp or so of the mixture at a time, roll into a ball and flatten slightly. Then place on the baking sheet and cook for 10 minutes. Flip, then cook another 10-15 minutes, until lightly browned. Go careful, they are very soft – not dry like some store bought falafel can be.

Serve in pitas with salad and yoghurt tahini sauce or with whatever ya like. This made about 10 falafel.

Yoghurt Tahini Sauce
¼ cup / 4 tbsps soy yoghurt
1 tbsp tahini
Pinch cumin
Pinch salt
Pinch pepper
A couple of dashes of hot sauce (I used Franks), optional
3 tbsp of water (I used chickpea cooking liquid
Tbsp of finely chopped fresh coriander (cilantro) – use flat parsley if you don’t like coriander. I think some mint and some dill would also be great in this.

Method: Just whisk everything together, it’s that simple.

Secondly, I've been planning to revisit my savoury muffins for ages and change 'em up a bit. I decide to axe the sheese and add some veggies. So I added some sweetcorn and shredded courgette with a bit of jalapeno for a nice kick. They are YUM, perfect for a savoury treat when the need arises! 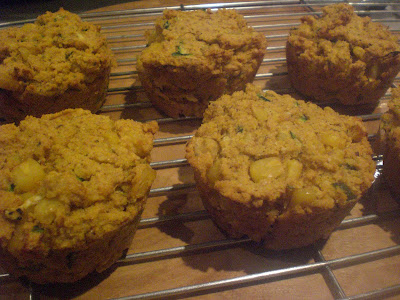 Spicy Courgette Corn Muffins
I know it sounds like a long ingredients list, but most of the items are store-cupboard stuff! This makes 6 muffins, double it for 12.

Mix together the dry ingredients in a large bowl. I put the veggies in with the dry and get them all nice and coated to stop them sinking to the bottom - although I don’t think that would happen anyway in this mixture – it’s pretty thick!

Whisk together the wet ingredients and pour them into the dry. Mix until just combined. Spoon into the muffin tins and press down. These don’t rise much, if at all, so you need to fill them to the top.

Bake for around 25 minutes, until just lightly browned and a knife or skewer comes out clean. Leave them to cool for a good 15 minutes and carefully remove to a wire rack. They’re pretty crumbly – but not dry at all. They are yum.


Cooking to: Eagles of Death Metal - Heart On (I got tickets to see them in June - SQUEEEEE!!)


And a bonus pic of dinner the other day. VCON Chickpea cutlets, couscous with pinenuts and veggies and tahini sauce with lots of paprika in. 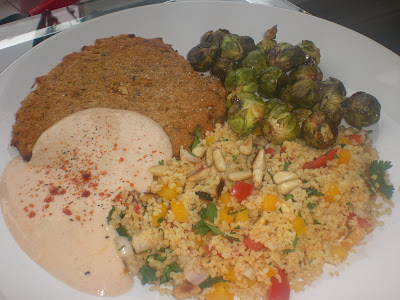 Happy Easter to anyone that celebrates it! I don't really but I am a HUGE fan of the 4 day weekend - sandwiched between two 4 day work-weeks! Have a great long weekend off everyone!!