Helloo there. ARRGGHHH I hate you blogger I HATE YOU!! I spent forever typing this post and blogger went out and it only saved half it!

Bedroom - I didn't take one from the door, but it's quite a long room. 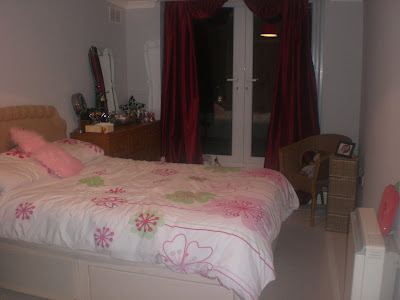 Make up and drawers! That mirror will be on the wall soon. 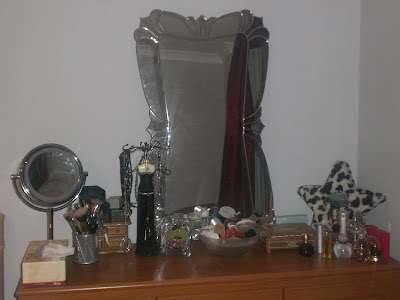 Patio doors in the bedroom onto the balcony. 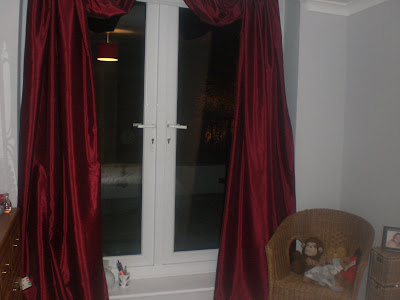 Bathroom - it's nice to have a bathroom cabinet. My last flat didn't even have a mirror in the stupid ugly bathroom!! 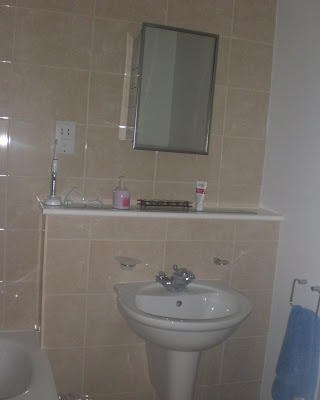 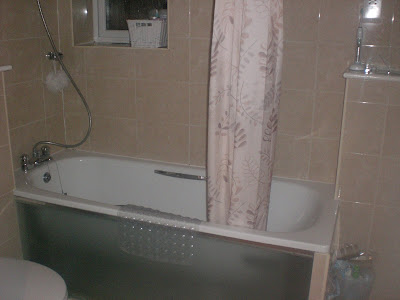 I took a dark one as well because the bath panel lights up (there's one above the sink too) - very nice for a relaxing bath!! 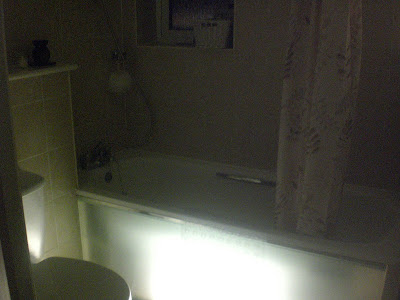 Night time view of the church from my balcony - spookeh!! 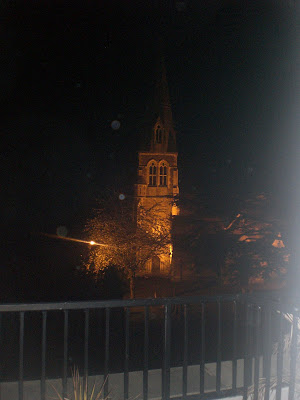 The balcony - well some of it anyway, this is what i could fit in the shot. It also goes around the side of the building, on the south side and that is where my veggie patch is going!! 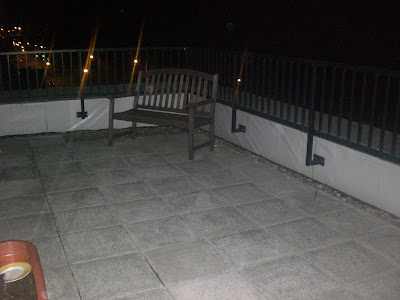 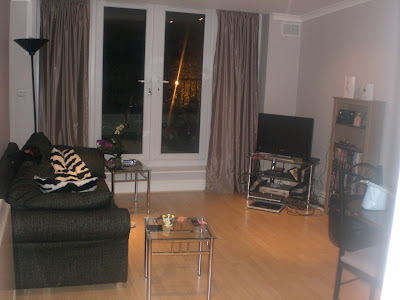 Kitchen - I'm not a huge lover of that one blue wall! But I've got used to it. 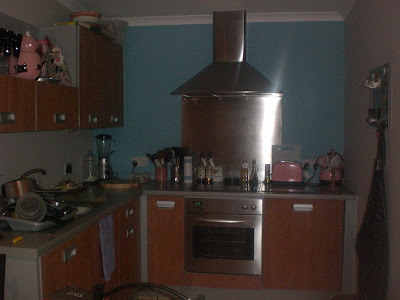 Now onto the important stuff - the foodz.

Last night's dinner I was planning on making burgers with the cooked quinoa I had but didn't really have anything to go in with the quinoa. So I made the crash hot potatoes that Jessy keeps raving about. She's right - they're awesome. Mine are a bit more crash squished taters, but I'm ok with that. I also had some spicy italian sausage, some roasty veg and I made the Merciful Miso Gravy from La Dolce Vegan, cuz I was feeling saucy. Glad I did too cuz DAYUM! That stuff is rad. I used wholemeal flour instead of plain flour - I wasn't sure how that'd work but it worked perfectly and was yummy. 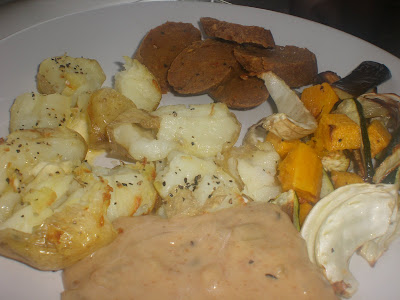 Brekkie at the weekend was french toast. Normally I have mine with ketchup - I'm English afterall! But I didn't have any so I tried the sweet variety. Hell yeah it was good! I added some orange zest, vanilla and cinnamon to the mixture and served with maple syrup. YUM. 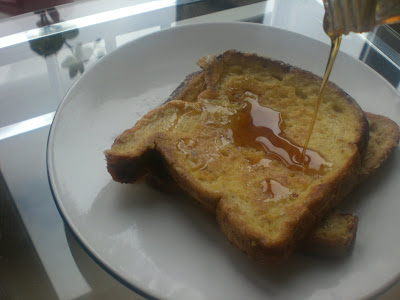 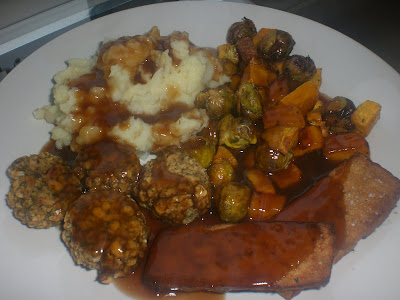 I forget exactly what I put in this but it was veggies, tofu, tinned tomatoes, spices and a baked sweet potato. It was pretty good. 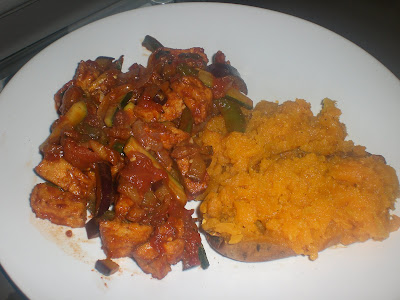 This was my favourite of the bunch, so there's a recipe! I veganised one of sainsbury's food for a fiver leaflets but as well as veganising, I added in some more veg, used fresh tomatoes, wholewheat pasta and decided not to deep fry the courgettes. Seriously, what did them poor courgettes ever do to sainsburys??? I used Julie Hasson's Spicy Sausages but the sauce is so good you could really leave this out, or just add in some more veggies! 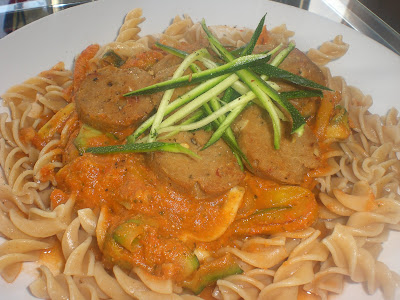 Method:
Chunk up the tomatoes (seeds, skin and all - just cut out the white core) and throw them in the blender with the tomato puree, water, pesto and paprika in the blender. Whizz till smooth (I did this with a hand-blender and the beaker that came with it).

Throw the pasta in a big pan of boiling water and cook according to pack instructions.

Heat the oil over a medium heat and gently cook the onions and peppers (a pinch of salt helps) for 5 minutes or so until they start to soften. Add the courgette and cook a few more minutes, then add the garlic and cook for just about a minute, until it starts to get fragrant.

Pour on the sauce and let it simmer for 5-10 minutes (until your pasta's ready really). If you're using the sausages, just put them in the oven at 180/350 for about 5-10 minutes until they are warmed through and just starting to brown. Don't overdo it or they'll be dry.

Add the nutritional yeast and salt & pepper to taste. Serve over the pasta with the sausages on top if using.

*I had some pesto in the fridge that I'd made the day before, but you could use a good vegan jarred version or just throw in some basil leaves!


Lastly, I found this pic on my camera. It was a fairly unspectacular shepherds pie filling of TVP, tinned tomatoes, spices and veggies but the topping was magical! Mashed potato & sweet potato with some vegan margarine, soymilk and salt & pepper. Simple but oh so seriously tasty. I'll work on the filling!! 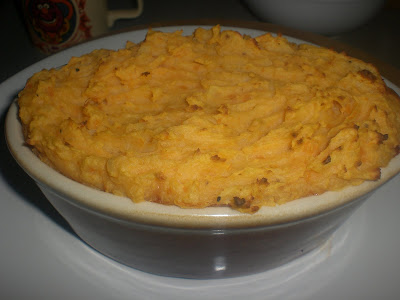 That's all for now. Ooh except my Mum said she was going to sign up for email updates so HI MUM!! xxxxxxxxxxxxxxxx and no the comments are not just for vegans - feel free to leave one!
Posted by Sal - AlienOnToast at 09:20