Let there be Rock!

I was looking through my camera last night and saw that I had a crapload of food pix on there and now I see why - it's been almost two weeks since my last blog post. So strap yourself in - i've got a lot of pics for ya!!

Starting off with last night's dinner. I really could not get inspired last night and couldn't decide what I wanted and somehow it struck me that soup & a sarnie would be a good dinner. And it was. The soup was just a roasted yellow pepper, an onion, some potatoes and veggie stock cooked up and blended with a little soya cream. It was really good! 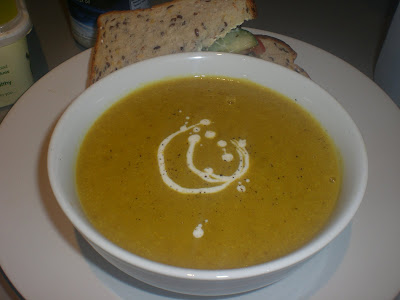 The sarnie was some tofu that I marinated with some miso, maple syrup and some other stuff that I forget and then baked. With cucumber, tomato, alfalfa sprouts and vegan mayo. YUM! 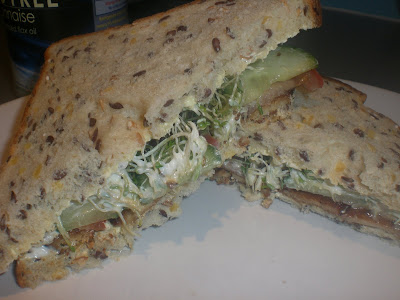 The inside of the sammie.... 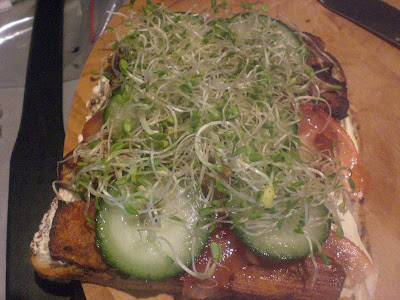 This one was brunch yesterday. I had a 'great' idea to try and make individual frittatas. Yeah it didn't really work. It was more like baked tofu scramble. It tasted good though but I need to work on the recipe! 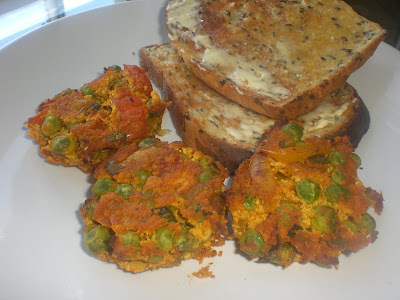 Mum & Dad came round for lunch on Saturday and Dad had made tomato & basil soup and brought it with them. It was tomato with some other stuff chucked in and it was awesome. 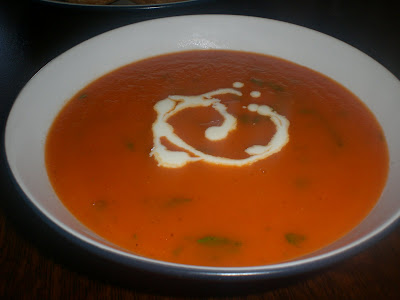 I made us some lower fat carrot cake muffins, with an orange glaze one. I ALMOST forgot to take a pic, I was just about to scarf the last one when I remember. Hence the messy pic! 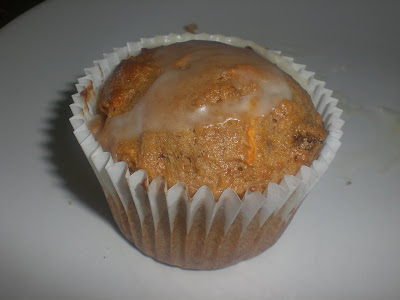 Last week we resurrected our tradition of my girlies coming round in the week for dinner. I made balls! (Hee hee!). That's VCON's beanballs to the less childish of us. The recipe said it made 12-15 balls (hee hee!) but I got 23 out of it! Obviously I don't know what a walnut should look like! 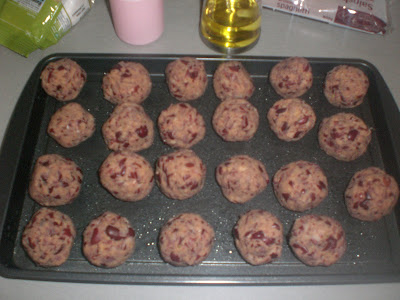 On top of spaghetti ... all covered in..... tomato sauce! YUM. I had read reviews saying the balls (hee hee!) were mushy. I agree, they were a little, but not enough to bother me as they tasted really good. 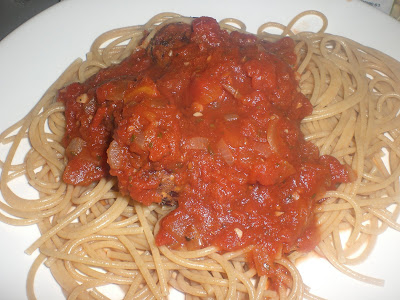 I also made us some garlic bread to go with. 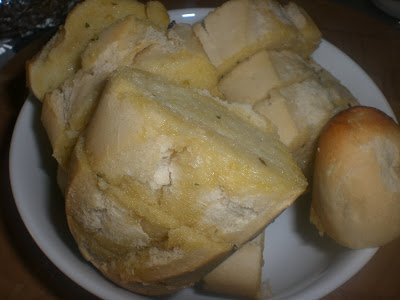 We're all trying to be good and avoid cake so I made a Lychee & Lime Sorbet. It was ok but I went a bit overboard with the ginger! I will work on it. 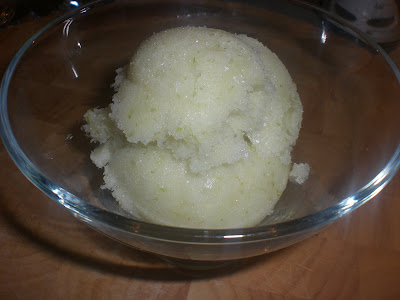 This was a stir-fry I did last week. I was knackered and had to get food shopping on the way home so I just picked up a pack of stir-fry veg, a sachet of sauce, a pack of marinated tofu pieces and a pack of crispy seaweed, then just served it with some udon noodles. It was ok, the sauce was a bit bland so I had to jazz it up with some spices. 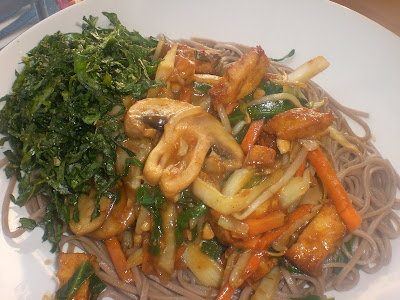 The next two were variations on a theme. I saw a recipe for a great looking salad in a book I bought a while back called the Low GI Vegetarian Cookbook. It's a pretty good book - it has lots of recipes that if they are not vegan, are mostly easy to veganise. It also has suggestions for both veggie & vegan meal plans. But anyway, back to the salad. I didn't have everything they called for so I decided to wing it.

Udon noodles, marinated tofu pieces, avocado, salad leaves, toasted cashews and I made a dressing with the juice of a lime, a tbsp of mirin, a tsp of rice vinegar and a tbsp of soy sauce. I finished it off with lots of chopped fresh mint and coriander. It was really light and zingly. YUM. 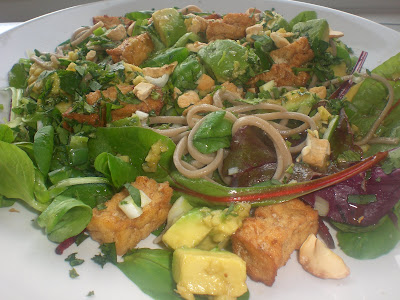 The next day, I still had half an avocado so I went with some more cold udon noodles, julienned carrot, avocado, tofu, spring onions and a similar dressing as before but with a bit of chilli and some peanut butter mixed in. Really good!! 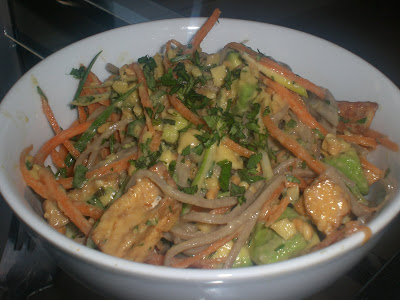 A meal last week - I made a pilaff using barley instead of rice and lots of cumin and paprika. And I served it with the Cumin Lime Tofu from Eat Drink & Be Vegan. I love that stuff - soooo good! 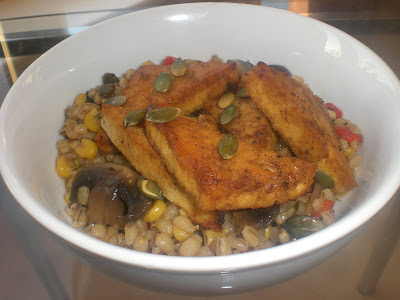 Lastly, a couple of experimental low fat baked goods - both of which need work! Firstly some cookies - they had cashews and sultanas in and oats. They were nice but not quite right. 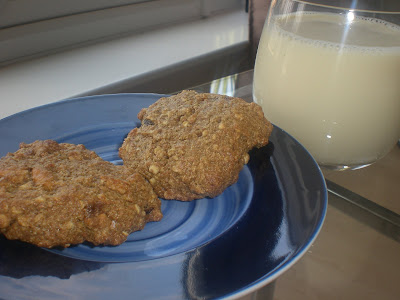 Secondly, some muffins. These also had sultanas in and some spices and other stuff that I forget. Again, they need work. 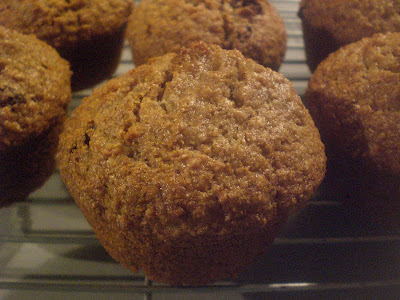 OK and non-food related. My mum bought me a Hetty!! Which is the female Henry Vacuum cleaner. Not only are these little things cute, they are more environmentally friendly as they use less energy and they are powerful little suckers too. Plus they take up less closet space so there is more room for shoes! Win-win! 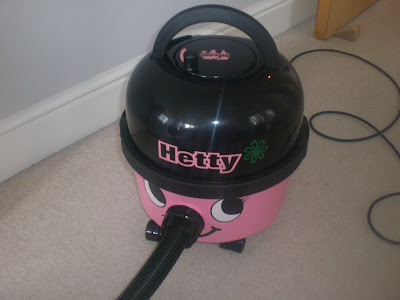 It even came with a pink canvas bag to encourage you to use less plastic bags when you do your shopping. 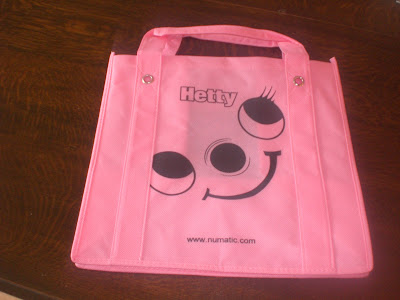 And lastly, it was pointed out to me last time that I hadn't yet posted a pic of my tattoo. Sorry, it totally slipped my mind. I have struggled to get a decent pic and this is where it's still a bit scabby but you get the gist.... My two best friends have the same* tattoo as well.

(* Well it was supposed to be the same but the guy who did it messed them all up so they are all slighly different.) 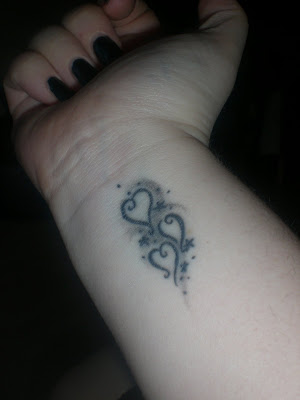 Cooking to: Mostly this week - AC/DC (went to see them thursday and they were freakin amazing!!)
Posted by Sal - AlienOnToast at 09:49