It's been a while but I am now all moved in, settled and almost completely unpacked!! I just have a few more bits (and a craptonne of bill-shredding) to do! The flat is looking gorgeous and I'm so happy with it! I haven't taken photos yet as it's not all ready but hopefully by next time I'll have some to share.

Also, I had my shoddy tattoo fixed on Friday and it now looks lovely, so once that heals I'll post a pic of that too - YAY!

It's great to have my own kitchen again and I've been really enjoying myself, thinking up menus and cooking. On my second day in the flat, I felt the need to make bread. I had some soup in the fridge and wanted some lovely rolls to go with, so I made some.

They were lovely and crusty but once cold, they were a little too dense so next time, I'll make 8 out of the dough instead of six. I sprayed them with a teeny bit of light olive oil and sprinkled some sesame seeds on them before I baked them. 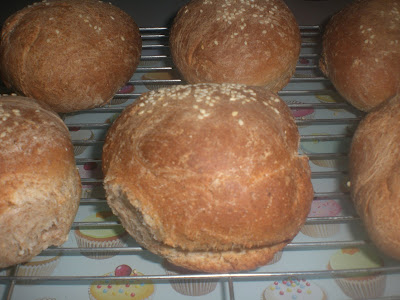 Last monday, I made Jessy's butterbean burgers, I used yellow pepper and added in some fresh parsley because I had some in the fridge. These are soooo freakin good! 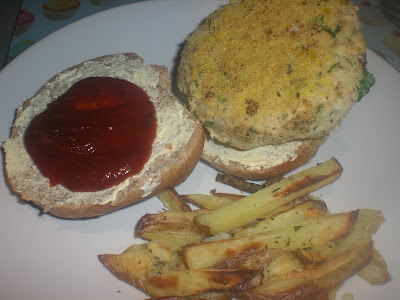 For lunch the next day, I had another patty of the beanburgers left and to make it a bit lighter for lunch, I didn't bother to cook it up, I just mashed half of it with some soya yoghurt to make a sandwich spread. YUM!!!!!! Seriously yum. I did the same with the other half the next day. 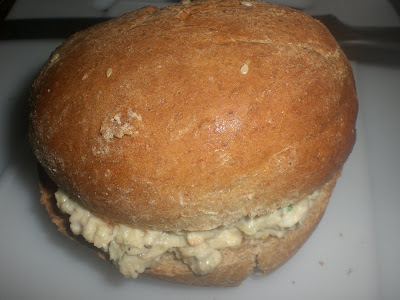 I had this big old bag of basil in the fridge becuase it was on special so I bought it and only used a little bit in the soup I made, more on that in a minute. So I thought I'd make some pesto and I had it mixed with some soya yoghurt and some fresh, shelled edamame that I bought in watroise, served over wholewheat rotilli. Nice but the beans were a bit, erm crunchy, despite following the cooking instructions like a good girl!!! 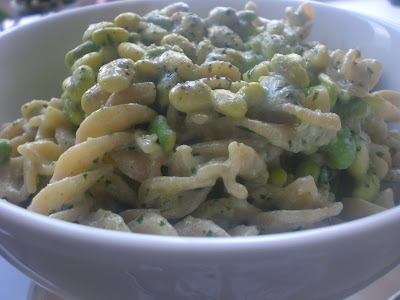 Speaking of soup, this is it. I really struggled to get a good picture of it, as you can see! I roasted up some plum tomatoes and garlic cloves, then added them to my new blender with veggie stock, salt & pepper and a handful of cashews. It was good but my blender really couldn't cope with blending the cashews properly - my trusty old stick blender may have done a better job. It tasted rad though. 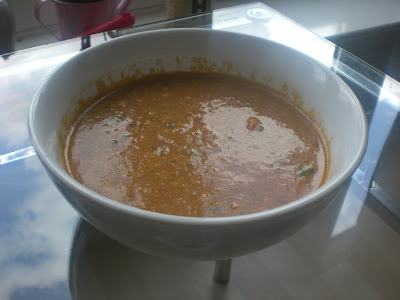 I made some VCON chickpea cutlets in the week too. I didn't have any breadcrumbs so I subbed in medium cornmeal. I had to double the water but I really like the flavour of this. It gave them a lovely crunchy edge as well. I always bake my cutlets, as I prefer them this way and I also halved the oil called for in the recipe.
The stir-fry was so good though, that it didn't even really need the cutlet. It was loads of veggies, cooked spelt wheat and some teriyaki sauce. MMM. 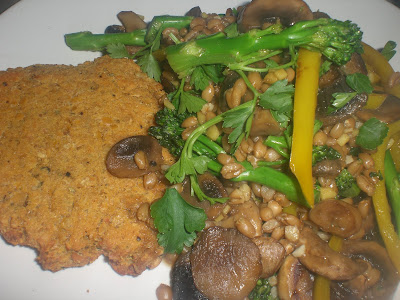 This is the spelt wheat - I saw it in Waitrose and had to give it a try - good stuff!! 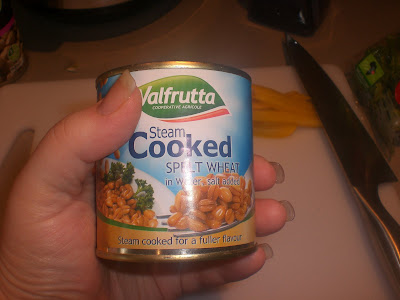 And this was another Jessy recipe!! Jalapeno polenta with spicy black beans. I added some mushrooms into the black beans and also some fresh parsley as I still had some kicking around. This was gorgeous. I had the polenta cold for lunch the next day and it was just as rad. And the black beans were delicious - definitely a winner! 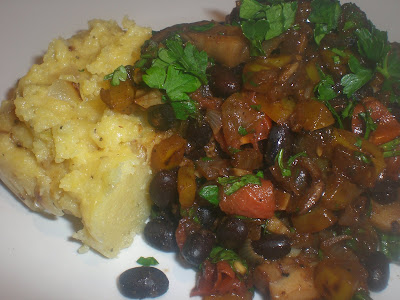 And shocker - no baked goods (aside from the bread)! I've been really trying to be good, as we have now picked our bridesmaids dresses for October and so I only have 6 months to drop some poundage!! I wonder how long that'll last!!
Posted by Sal - AlienOnToast at 13:00