The Good The Bad and the Fugly

I haven't blogged in a while so I have lots of pics. This week has been a weird one and a lot of it has SUCKED! but there have been some good parts too.

Bad - I'm a gimp!! I got a blister on the ball of each foot, no word of a lie, an inch long each one!! I never knew that blisters could be so painful. This is not run of the mill pain - this is my entire foot and some of my leg is sore and I can hardly walk!

Work has been rather shit this week.

Also I get up this morning, get in the car, put on the radio and hear the sad news about Michael Jackson! I am a big fan of his music and have been since I was a little girl. I got really tearful when they played Beat It on the radio this morning and then nearly busted out crying at work when I watched Jermaine's press conference on the internet. It's so sad. RIP Michael.

But onto the good stuff - I saw Eagles of Death Metal Live on Wednesday night. They are just so awesome, great live and Jesse is the shit. I lost count of the number of times he shouted CAN YOU DIG IT! It's a good thing I'm single or I'd be trying to convince the man in my life to grow a Mo like Jesse!! (I know they sound scary but they're not so if you are not familiar with their music go download Death by Sexy now, like right now!! then download Peace, Love, Death Metal & Heart On after that.)

The other good stuff? My PPK swap package arrived from the very awesome Vijita from Canada. she totally made my crappy day good - I got a buttload of swag.... 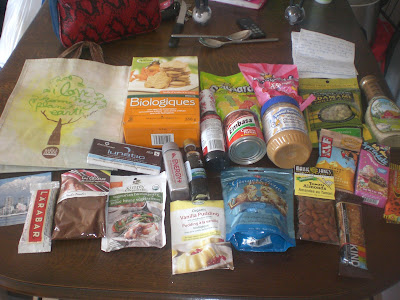 So onto the food. I had a go at making some raw bars and they're good but they were a little too soft and fell apart a bit. I need to try again. They had dried apricots, cranberries, sun-dried bananas, pumpkin seeds, sunflower seeds, flax seeds, brazil nights, walnuts, peanut butter and maple syrup. So technically I dunno if they are really raw - does maple syrup count??? 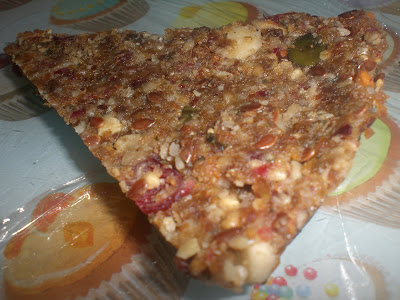 When I was younger, mum had this recipe for pasta with roasted peppers and bacon and mushrooms. It was good and we used to make it a lot. So I thought I'd have a go at veganising it. I couldn't remember all the ingredients and I so I added some stuff I know wasn't in there. But it was really good and even better cold for lunch the next day! Recipe at end of post. 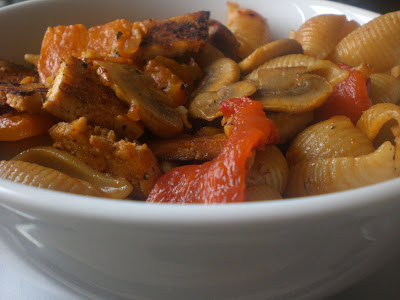 This was dinner on saturday night for me & my friend and it was seriously rad. Guava's post about pot pies had me craving pie and the idea of a mushroom pot pie was just genius. So I gave it a go and it was awesome. I don't have the recipe 100% yet but when I do i'll post it. 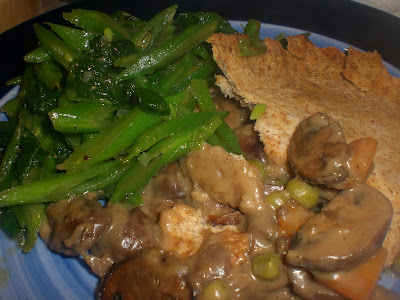 Dinner on Monday for me & my friend was this mixture of veggies, tomatoes and white beans - I served it over wholewheat rotilli pasta. 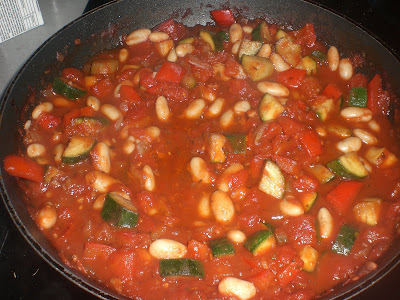 And also I made some garlic knots to go with it. 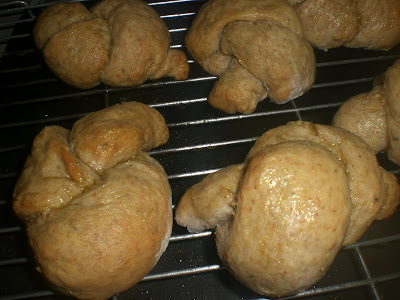 Dinner on Sunday night had to be quick, because it was 8ish by the time I got back from the gym. So I went with a Sunday Soup & Sarnie. I made a quick hummus with white beans and dijon mustard. 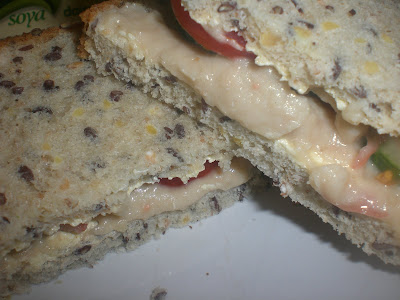 And I made my fast pea soup. 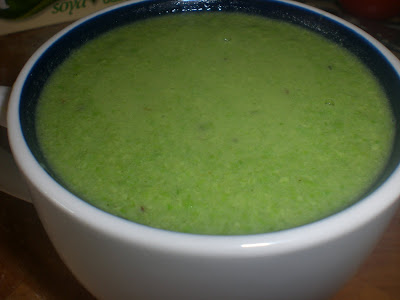 The last couple of days, because of my feet, my food has been spectactularly un-interesting and some of them - down right FUGLY!! Mainly because I can't stand up for very long. This was some brown rice cooked with tomatoes and some nooch sprinkled on top. 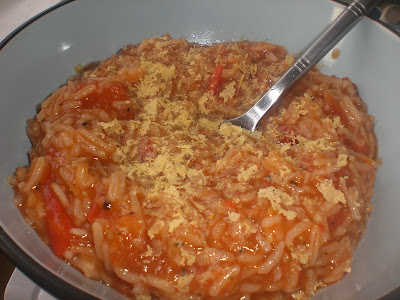 I found these in Holland & Barrett and thought I'd try them. They have a weird texture, like most fake meats do. They need a bit of frying to make them a nicer texture. Overall they're not bad but I wouldn't buy them often. 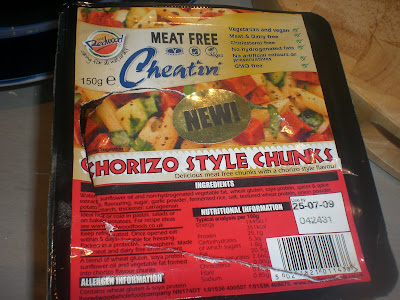 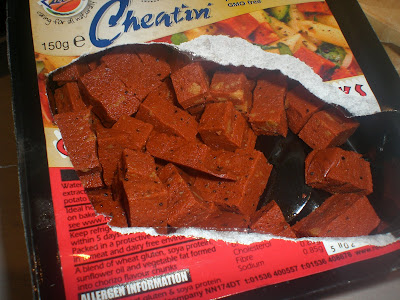 I threw in some peppers, courgette, spring onion and some jarred salsa. 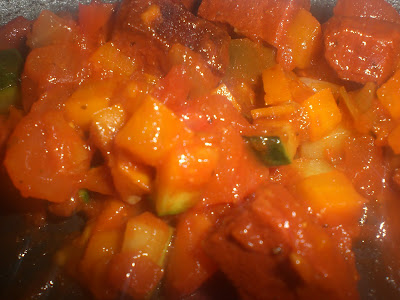 Then threw it on a wrap with some guac and sour supreme. Not bad, not great either. 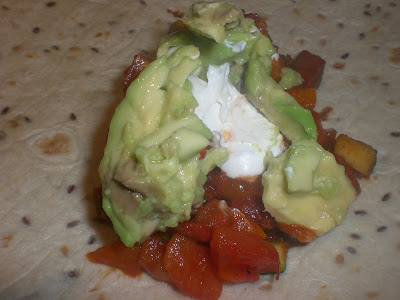 Last night, my feet were particularly sore, so all I could manage was throwing some basmati in a pan with peas, sweetcorn, tomato puree and some spices. It was surprisingly not bad for such a lame effort. 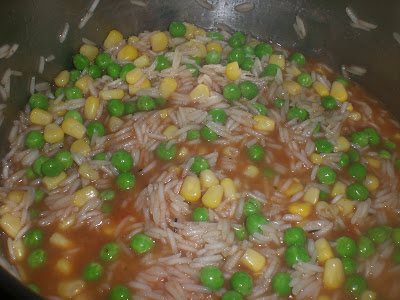 Today, my feet felt marginally better so I made some mac n cheeze and threw in some peas & sweetcorn too. 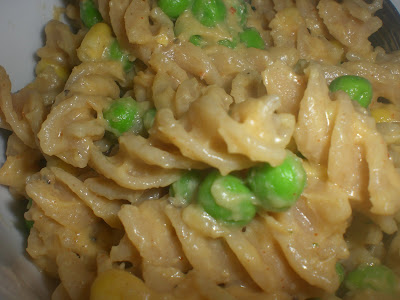 Ooh and I just had to share..... It's been a long time but on Sunday, I made some soap! I know it's not the prettiest soap in the world, but serously it's been about 2 years since I made soap. It smells like a piece of heaven though - I scented it with dreamsicle fragrance oi. Up close it's pretty and shimmery too because I added some pink and gold mica to it. I am looking forward to getting back into making some products again! 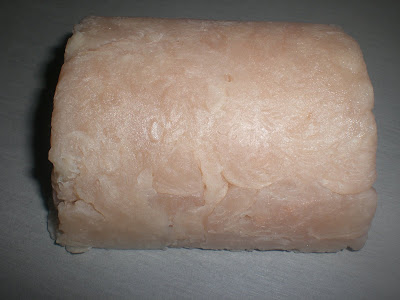 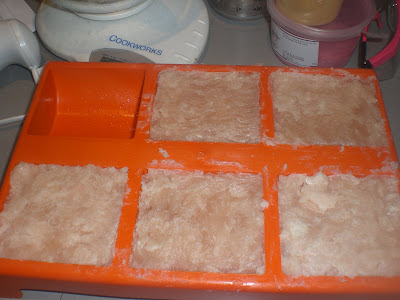 And here it is cooking away in my crockpot! (don't worry, I have a separate one for soap!!) 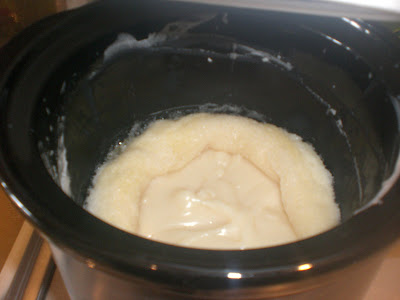 Method:
Start by sauteeing the onion for about 5 minutes over a medium heat till it starts to get transluscent. Then add the mushrooms and cook down for about 5 minutes. Add the garlic, tomatoe puree and thyme and cook for around a couple of minutes. add the wine and scrape up all the bits off the bottom of the pan until the wine reduces till pretty much gone. Then add the water and mix well.

Add the peppers, 'bacon' and pasta and heat through for a couple of minutes, then season to taste and serve.

*The peppers - if you're doing your own, spray them lightly with oil, put on a baking sheet and bake at 250C/500F, basically the highest your oven will go for about half an hour till they are good and black. Then chuck 'em in a bowl and cover them with clingfilm. When cool enough to handle, the skin should peel off pretty easily.

** The bacon - up to you what you use. I used the marinade for the tempeh bacon recipe in VWAV but used thinly sliced tofu instead, cuz I can never find tempeh. I marinated it for about an hour, then fried it in a dry frying pan for a few minute until lightly browned on each side. You could use veggie rashers too but I personally think they're repellant! I used one 200g block of taifun tofu and I put the whole lot in the pasta.