What is it about weekends - they go way too quick!!! Hope everyone is having a good one though anyway.

I started Sunday with some waffles! I made some yesterday and they were not bad but I forgot to take a pic. These are today's - chocolate with walnuts in. I'm still working on the recipe, there never seems to be enough to fill the whole waffle iron and they come out look like a big round one! But I'll get it right. They were pretty yummy with a blob of soyatoo whipped cream and chocolate syrup (just maple syrup and cocoa powder mixed together). 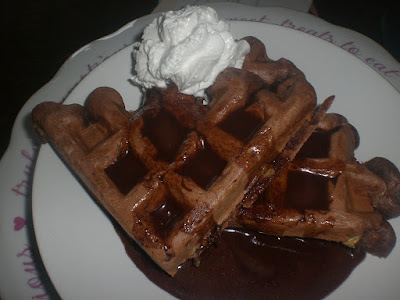 Lunch - I made McVegans. I had made some seitan the other night with these in mind. I cut a circle out of a seitan patty and out of a block of tofu. I dipped the tofu in chickpea flour seasoned with a little salt, onion powder, paprika and black salt and then lightly fried in a teeny bit of oil. Then stack the sucker up on a wholewheat english muffin, with a tofutti slice and stick it under the grill until it melts. YUM. 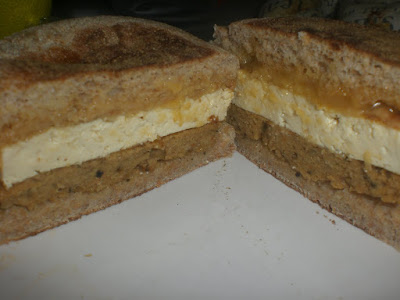 Friday night I had the girlies over for dinner and cooked us up a mushroom risotto. I've never made a proper one with arborio rice and adding the stock slowly before, so I was glad it all worked out. In fact it was really yummy. I added a bit of tofutti cream cheese and some nooch in at the end. We had it with steamed green beans and sugar snaps. 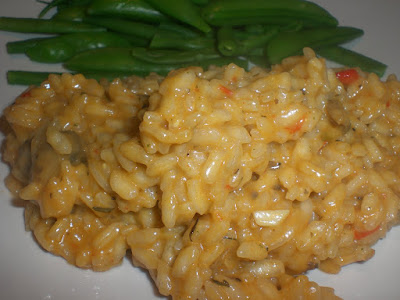 For dessert - a choccy cake. I cut the sugar and oil right down in this and added some apple sauce to make it lower fat - it was really good. I also chucked in some dried sour cherries. Although I hiked the calories right back up by putting chocolate ganache on top. Ah well, it was yummy and friday night!! (I'm still working on this recipe!) I struggled to get a decent pic of this. 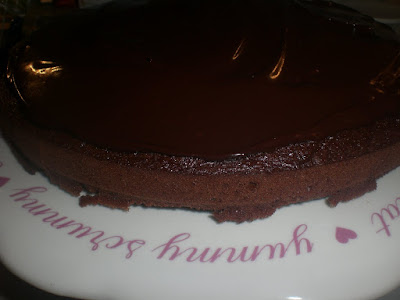 With a blob of soyatoo! 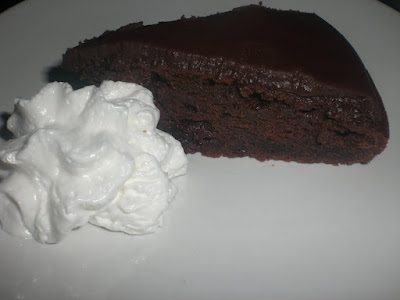 And to drink we had Nigella's apple martinis (vodka not gin!). I bought the apple syrup online and got some apple sourz liqueur last time I was shopping so that I could make these. I thought I'd have to up the syrup because I'm not one for really strong drinks but I didn't - they were perfect. They need ice though in my opinion! So good but pretty sweet though. I've just realised that I bought granny smith apples to serve a wedge of apple in them and forgot. DOH! 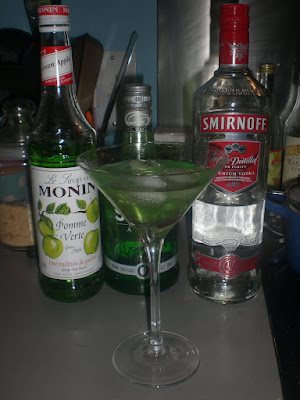 This was dinner on Thursday I think. Roasty sprouts and butternut squash and potatoes with a seitan cutlet. I also made the merciful miso gravy from La Dolce Vegan to go with it. That stuff rocks. 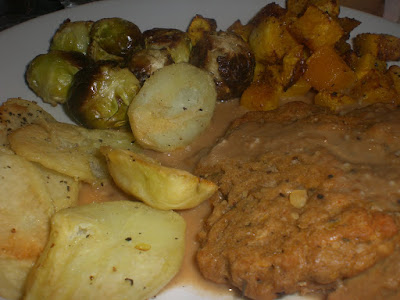 This was another meal from last week that was awesome! The squash was a bit crap - it's one of the most tasteless ones I've ever had. The tofu I just sprayed with braggs and sprinkled it with spices then baked it. The lentils were the star though. I stole the idea of the barefoot contessa and veganised / spiced it up a bit. Recipe at the end of the post. 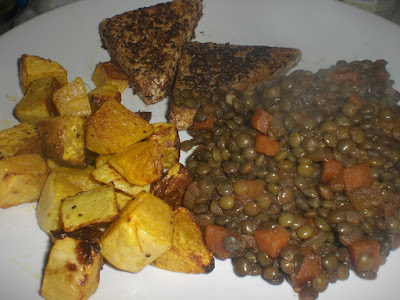 Lunch last week - blended up chickpeas with some mayo and nori flakes and some sweetcorn added, with a salad of rocket, shredded carrots, cucumber and avocado. The dressing was just some lime juice, soy and wasabi powder. YUM. 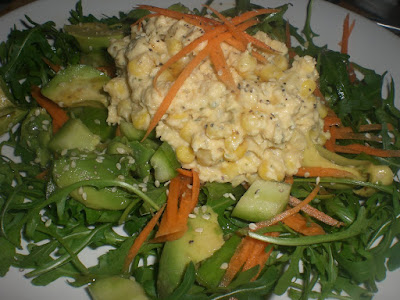 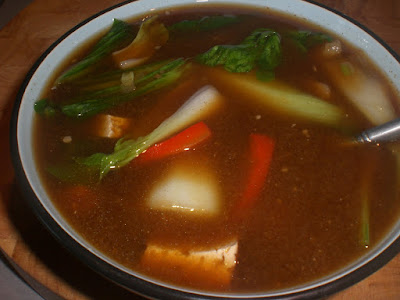 Edit: I forgot the lentils recipe - so here it is:

Method:
Heat the oil in a pan and saute the onion for a few minutes. Add the garlic and spices and cook for about a minute.

Add the lentils, carrot and about a cup of stock and stir well. Cover and cook for about 20 minutes, stirring occasionally, until the lentils are cooked. Add more stock if the pan goes dry at any time. If at the end of the 20 mins there's stock un-absorbed, turn up the heat and cook it uncovered a few minutes till most of it's absorbed.

Stir in the tomato puree/paste and vinegar and then serve.

This makes 2-4 servings, depending on how big you want the portions to be.

That's all for now folks. Enjoy what's left of your weekend.