So much cuter, with something in your mouth.....

I have no real reason for that title, except that I couldn't think of a name for this post and I went to see Nickelback last week and they were awesome as ever! I even had a pretty great view for most of it and being a short-arse, that's rare!

Also I disovered a new band through them - Daughtry!! They were the support band and they were great, I've downloaded both their albums and listened to them to death since them. I know you're probably thinking - they've been around ages, Sal - catch up!! But I don't watch American Idol so I'd never heard of them!

OK so back to reality. I haven’t blogged for a bit because I didn’t think I had many pics to share but I actually had a fair few on there! Although lately, I haven't been taking pics every day because my dinners have been looking all very similar – like this.... roasted veg with some sort of grain on the side! Kind of boring but tasty!!

This was roasted veg with bulgar wheat that I cooked in veg stock and spices and threw some chickpeas and frozen peas into. 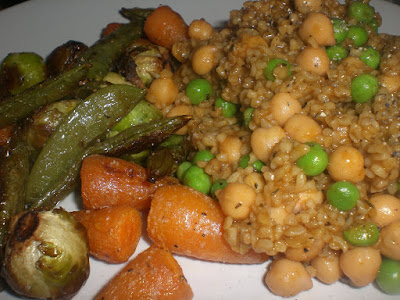 I wasn't going to post this one, it was kind of ugly but I had a mini disaster with it! when I was making the nooch sauce for the macaroni, I open the big side instead of the shaker on the onion powder, shook hard and ended up putting in abou 3 tbsp of onion powder! ARGH!! luckily it clumped up and I managed to get most of it out and not wreck my sauce! hahaha phew! 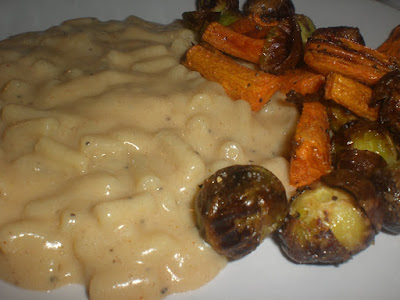 This was yummy though. I saw the barefoot contessa make this zucchini gratin on her show and it looked awesome but loaded with cheese. As me and my friends are dieting I decided to try and hack the calories down as well as veganise it and it worked out really well (recipe is at the end). I love Ina, but her recipes do usually start with 3 sticks of butter and bottle of cream!!

But anyway, I always plug my recipes into sparkrecipes.com as I count calories and I plugged in the original recipe too out of interest! Depending on how many you split it between, hers weighed in at 433 cals per serving with 33.5g of fat (20.3g of saturated fat!!) GROSS! Mine was 124 per serving! Although we actually split it 3 ways not 4 so it was more like 164 but that’s still pretty good!! 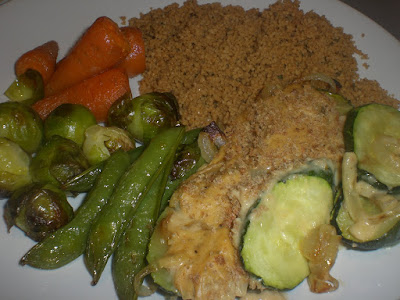 Last weekend I went up to the midlands to see family. I haven’t seen my dad’s side in more than 3 years (bad Sal!!). My 3 aunties and uncles and my Granddad, plus me and my mum and dad all went out for dinner. We went to a pub/restaurant so I wasn’t sure what the food would be like for me and I couldn’t get hold of anyone by phone to ask. But I was really lucky – there were a couple of veggie options that could be easily veganised by taking off the cheese and the waiter also told me that they didn’t use butter on their veggies, it was a substitute approved by the vegan society!! Happy day!! I had a roasted aubergine filled with lots of other veggies, plus carrots and cabbage and green beans on the side. Oh and the best chips ever! I didn’t get a pic though!

But for putting me up, I made these as a gift for my Auntie & Uncle. They got the omni seal of approval as I got an email from my auntie saying they were the best cakes she, my uncle and my cousin had ever tasted and could she have the recipe!! This is a big compliment because my Auntie's an ace cook!

They were the basic chocolate cupcakes from vegan cupcakes take over the world. I tweaked it a bit to replace some of the soymilk with amaretto liqueur and upped the almond extract a bit. The icing recipe I struggled to give her because I always wing the icing! It was a bit of pure soya margarine, some tofutti cream cheese and icing sugar, then I just added almond extract, amaretto and a bit of soymilk to it. 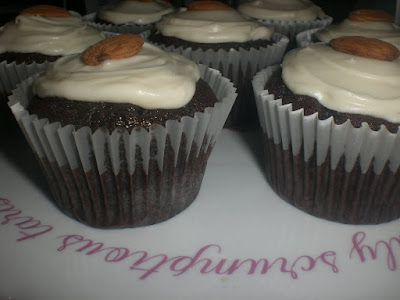 Last week in the supermarket, I saw this cauldron curry. I'm not a lover of ready meals but sometimes when I get back from the gym I'm not always in the mood to cook and so I thought I'd give this a go and was pleasantly surprised. It wasn't at all bad! 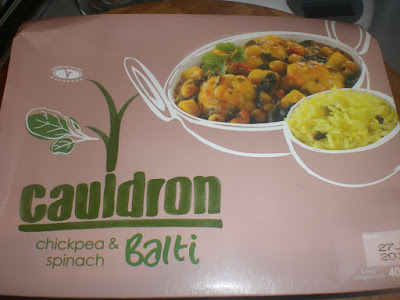 Needed a bit of salt, but then I think that about most things! :-) 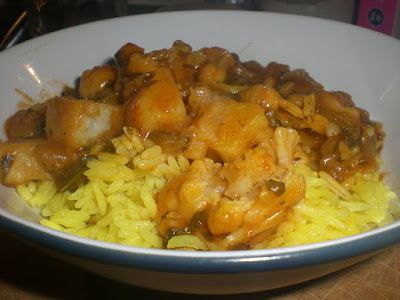 I found this on my camera, forget when it was from (probably Sunday) but it was a pretty yummy roast dinner of baked tofu, sage & onion stuffing, roasted potatoes and parsnips and green beans & peas. Oh and lots of bisto of course! 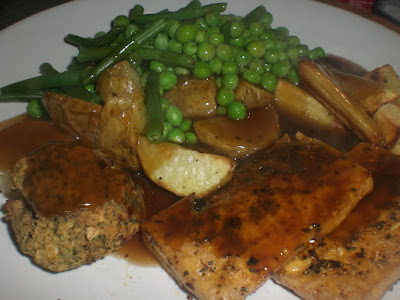 oh and here’s that recipe as promised.....

Meanwhile, dice the onions and sauté then over a medium heat in the remaining 2 tsp of olive oil, until softened and starting to brown, but not too coloured (about 5-10 minutes).

Then make the sauce. Mix together the cornflour and soymilk and put into a saucepan. Bring to a simmer on a med-high heat and stir until thickened. Remove from heat and stir in tahini, mustard, nutritional yeast and spices. Add salt & pepper till you’re happy with it.

To assemble, put the slices of courgette into a baking dish and put the onions on top, give them a jiggle around to mix together. Pour the sauce over and spread it out.

Have a freakin awesome weekend everyone, whatever you're doing!!