Breakfast is the most important …. Blah blah blah…

I’m lazy and I like to sleep in, so complicated breakfasts are a no-no for me during the week, unless I’ve made it the night before.

I remember years ago Jamie Oliver made this breakfast mush that looked awesome, on his Naked Chef programme. Now it was ages ago, so I can’t remember exactly what went into it but I remember it had oats, dried fruit, apples and a shitload of milk! It's kind of like cold porridge but WAY more awesome and it's really healthy too!
It was called pukkola or some shit – which is a pants name.

So here is my version, minus the cow pus and stupid name. I was going to call it Salola, then I realised that name was wank too.
YUMOLA (AHAHAHAH)

Ingredients:
2 cups of oats
1 cup of dried fruit – any combo you like (roughly, I used ¼ cranberries, ¼ dates, ½ cup sultanas
½ cup goji berries**
½ cup oatbran
A slack handful* of brazil nuts (I used 8)
A slack handful of blanched almonds (I used 14)
¼ cup ½ cup of seeds (use whatever you like, mine is just a mixture of pumpkin and sunflower seeds)
½ tsp allspice
Pinch of salt

To serve:
Soymilk
A tablespoon or so of agave nectar (optional)
1 granny smith apple.

Method:
Mix together the oats, fruit, oatbran, nuts, seeds, salt and allspice. This makes a lot so at this point I put half into an airtight box and store it in the cupboard. The half you’ve got left will do 4 or 5 brekkies, depending on how much you can eat in the morning! This is what it looks like at this stage: 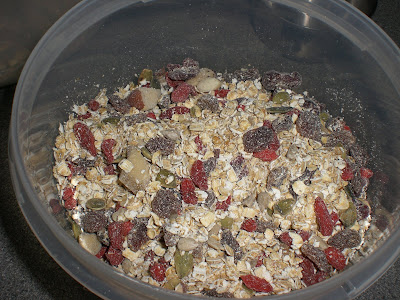 It would be delicious with just some soymilk or yoghurt and fresh fruit, but that defeats the point of this post so….

Into the bowl, add the agave and then pour on enough soymilk to cover the cereal. Grate the apple straight into the bowl and mix well. 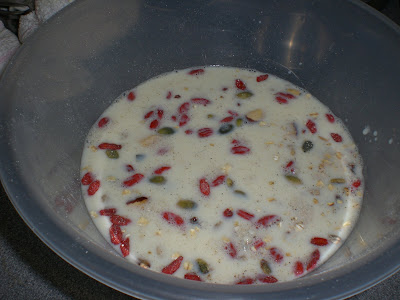 Cover with clingfilm and put in the fridge over night. In the morning most of the soymilk will have been absorbed and you’ll have a big bowl of mush that is a really really tasty breakfast! 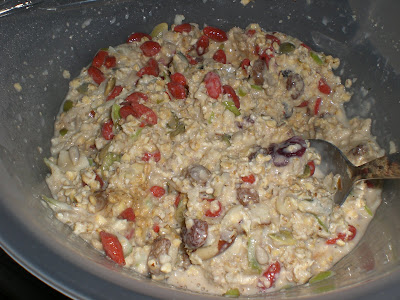 * Slack handful is my dad’s term (to describe how many sweets he’d just stolen from us probably).

**Goji berries – apparently they’re a superfood and I got this big bag of these, on special, from my local Julian Graves store. Normally I would use way less cuz these little suckas are pricey – they’re pretty though! Basically you need 1½ cups of dried fruit. They taste a bit weird straight outta the bag but once they’re all pumped up with soymilk the next morning, they taste awesome. And did I mention they’re pretty? 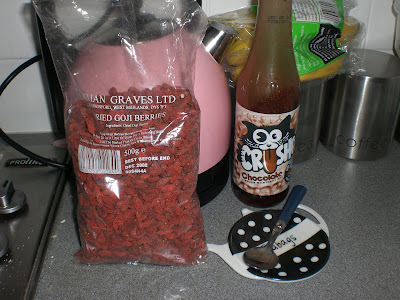 Cooking to: Roxette’s Greatest Hits
Posted by Sal - AlienOnToast at 14:28