I dunno why I’m pretending to be sad, maybe it’s the thought of trying to kick my baking habit!

I’m trying to be healthy and lose some unwanted poundage (before I’m bridesmaid next year and my best mate’s wedding!) and so I’m not baking cupcakes (must not bake cupcakes must not bake cupcakes....) and I came up with this salad for me and me mate yesterday, leftovers for today’s lunch. Just quinoa with some peas, sun-dried tomatoes, chick peas, gherkins and spring onion, with salt & pepper and apple cider vinegar and flax oil. Same dressing went on some blanched green beans, sweetcorn, the other half of the can of chickpeas, spring onion, tomatoes & some fresh parsley. Simple but tasty and healthy. 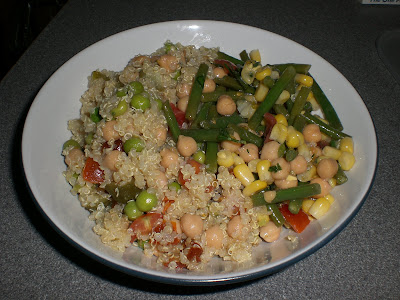 Onto dinner and I guess fried tofu is out!! So I decided that I may have been too harsh on ‘Skinny Bitch in the Kitch’ as I dismissed it without trying any of the recipes and relegated it to the back of the cupboard! What can I say – I’m judgemental and a bit of a food snob and a lot of their recipes seem to just be fake meat and cheese. But it’s the only vegan ‘diet book’ I own so I dug it out for inspiration.

Actually there’s some pretty decent sounding recipes in it and the recipe for Roasted Sausage, onions, peppers, garlic and polenta really sounded good to me, especially as I already had some homemade vegan sausage in the fridge - so I gave it a go. It turned out to be pretty good although I changed up the polenta recipe a bit as I didn't have the vegan parmesan they call for. So I added some sheese cheddar style spread and some fresh herbs (thyme, chives and parsley).
I served it with some cherry tomatoes in a simple balsamic vinaigrette, which was delicious.

Cooking to: Charlotte Hatherley – The Deep Blue
And in the spirit of being healthy ... this was pudding; orange & pistachio yoghurt ice cream. This stuff is seriously yummy!! (recipe below pic) and I’ll definitely be making it again.

Ingredients:
1 carton of Alpro Soya plain yoghurt (500g)
2-4 tablespoons agave nectar
Orange juice (around ¼ - ½ a cup)
Handful of pistachios (¼ - ½ a cup or so – depending on your preference)
½ tsp orange extract
½ tsp vanilla extract
A teeny pinch of allspice

Method:
You need to start this the night before, by not only freezing the insert of your ice cream maker but also by straining the yoghurt. This gets rid of all the excess liquid (thank you Barefoot Contessa for this tip!!).

To do this, put a sieve over a bowl big enough so it fits without falling off and also has plenty of room below the bottom of it, so the yoghurt isn’t sitting in liquid! Then line it with kitchen towel and pour in the whole carton of yoghurt. Cover it over with kitchen towel and leave it overnight. All the water will drain out – there’s a lot of it!

The next day it will be firm and look a bit like soft cheese.

Then add your agave nectar, start with 2 tbsp and add more if you feel you need it once the other ingredients are added. Use a small whisk to get everything incorporated and lovely and smoothe.

Then slowly add your orange juice (I use Tropicana smooth – but whatever you like will be fine). Add slowly, a tbsp or so at a time, whisking between each addition. Once you achieve a consistency you like, stop. I add it until it is like the consistency of the soft peaks stage of whipped cream.

Roughly chop the pistachios – I do this with a mezzaluna, makes it easy work! Plus the board that goes with the mezzaluna has a dip in it so they don’t fly off around the kitchen! Then add the orange & vanilla extracts and allspice and mix well.

At this stage you could just eat it! It tastes gorgeous and would be wonderful with fresh fruit or some granola but I wanted ice cream so, just transfer to the ice cream maker and freeze. It doesn’t make that much, enough for about 3 or 4 servings (if you’re conservative with portions!) so it literally only took about 10 minutes in my ice cream maker. A shot of ice cream maker action!

I would make double this if you’re doing it for more than just one or two people.

Cooking to: The fratellis – Costello Music

And a bonus pic... ok so it’s not really in the vein of the above post because it uses a whole can of (full fat) coconut milk (well minus 2 tbsp, I told you I’d tell you what I did with the rest of the can!! ;-) ). Anyway, this was Sunday night’s dinner. I ate lunch late and so I wanted something that I could throw in the slow cooker and leave until late when I was ready to eat. I had LOADS of veggies to use up so came up with this, slow cooker red thai veg curry.

I’m not posting the recipe just yet, because in the words of Roy Walker: “It’s good, but it’s not right”! It was tasty, but I need to tweak it still.

I served it with plain basmati rice. I also made some cornbread - I know you’re supposed to serve it with chilli but it was great with the curry (and I LOVE it with jam too). I used the recipe in La Dolce Vegan for Buttermilk Cornbread. 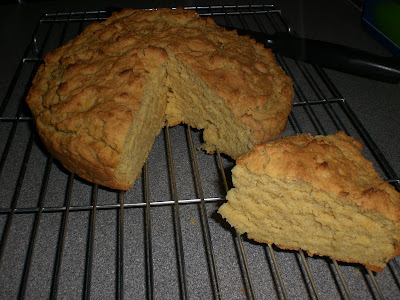 Cooking to: Def Leppard - Hysteria
Posted by Sal - AlienOnToast at 18:43