Two in one night cuz I haven’t blogged for a bit as I’ve been on site (at a gross show about food & meat machinery! Blergh) living off a diet of PB&J sandwiches and Chinese takeout! After working stupidly long hours, had a shite day at work and got totally deflated by some overly picky clients! So comfort food was in order and this was what I came up with. 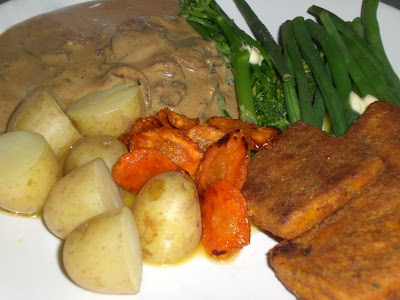 Cooking to Heart’s greatest hits. 80s goodness! (I always ALWAYS listen to music when I’m cooking, so from now on if I remember, I’m gonna tell you what I was cooking to!)

The muffins..... I been resisting the urge to bake delicious, sugary cupcakes and stuff myself with them, so I opted for a healthier muffin I could have for breakfast or a snack and so I will have something to take on-site with me this week so I can avoid crisps!

Bran, fruit, brown flour and way less sugar than normal – my attempt at a healthier muffin! The good news is that they don’t taste like plywood – like most bran muffins I’ve tried before. Recipe is at the end of the post. 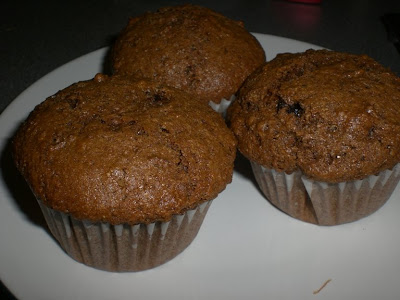 Mix together the soy milk and bran in a bowl and set aside to let the bran get mushy.

Mix together the rest of the wet ingredients and the sugar and stir well. Stir in the bran/soy milk mixture.

Add the dry ingredients and stir until just combined. Don’t overmix, or you’ll get tough muffins!

Divide between the muffin tins and bake until just firm and a knife comes out clean (between 15 and 25 minutes, depending on your oven, mine took just over 20 minutes).

I tend to overfill mine cuz I like them tall, which gives me 10, but if you were more sparing you could probably stretch it to 12!

Cooking to Back in Black – AC/DC
Posted by Sal - AlienOnToast at 21:18