So what has 'S' been cooking lately?

It seems like forever since I've blogged and I haven't really been taking many pictures lately! Sorry for that - combo of living off freezer food, trying to eat a bit healthy, finding it difficult to get inspired to cook and having a bit of a shit time at work of late. But hey enough of that.

Tonight I had my girls (E & M) round for a last meal in the flat and a Gossip Girl mini-sesh as my DVD arrived today - we are now addicted! Only I didn't take any pics! I wish I had though, cuz it was way more photogenic than anything else in this post! I made guacamole to go with tortilla chips, Dreena's cumin lime tofu and mexican stylee spicy rice with black beans, corn & peppers. Also, after seeing Jen's post about Sarah Kramer's chocolate pudding cake, I knew I had to try it and goddam it - it was freaking ACE! I forsee another one being made soon and next time I WILL take a pic!

So anyway, back to the stuff I did take pics of. Firstly, chocolate/ginger muffins. I still don't have this recipe right, but next time - it will be mine!! 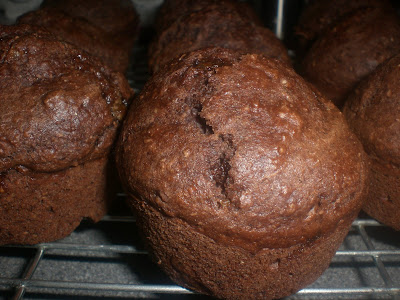 This was some soup I made by throwing a craptonne of veggies festering in my fridge into the crockpot, with some stock, beans and brown rice. I also threw in a whole chilli and just pierced a hole in it - that's a trick my dad told me, to get a bit of spicy nip but not blow ya head off spice. It worked too. 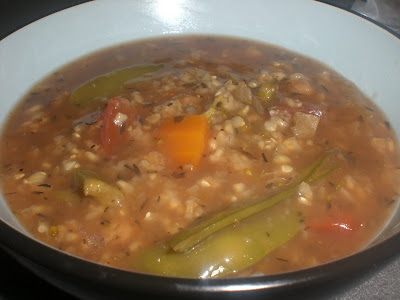 This was dinner for me & my girls last week - it's Shelly's awesome smashing grains casserole. This stuff is seriously good. I had used up all my bulgar wheat so I used barley and I didn't have any peas so I subbed edamame. YUM and easy to make - making this again for sure. 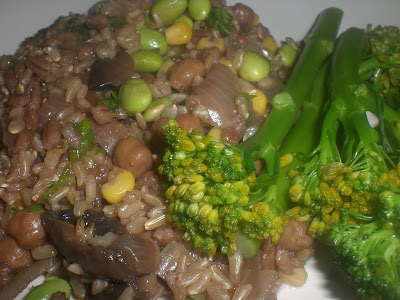 I have been eating a lot of meals that look like this lately - I cooked up some bulgar and threw in some veggies, tofu and some soy sauce and served it with some roasted portabellas. Boring but good. 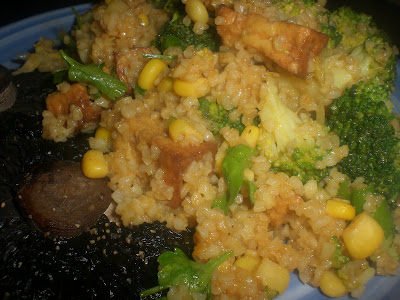 A similar sort of meal but with roasted brussels and squtternut bosh on the side! 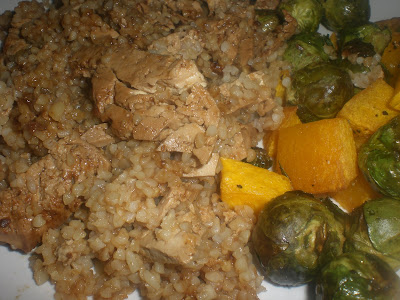 This is probably my last post before I move out of this little shoe box I've called home for the last year and I feel a bit sad about it. But I'm sure it won't be long before I'm slinging pans and covering myself in flour in my parents' kitchen to bring you some cookie pictures!