HAPPY NEW YEAR!!! I can't believe it's 2009 already. I trust everyone had a good NY's Eve? Mine was a bit lame but it was nice to be with my friends.

Midnight also marked my one year veganniversary! A whole year of being vegan and I've loved every second of it! I decided I needed to bake something extra awesome to celebrate - more on that in a bit though, I have a couple of food pics....

Yesterday's brekkie, pancakes with lots of cinnamon added to the batter and maple syrup. 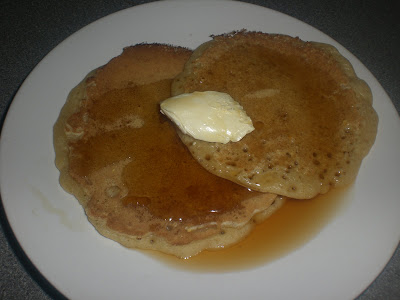 Today's dinner. It is rare that I fancy salad but today I did. I made the country fried tofu from Hot Damn & Hell Yeah (that stuff is awesome) and a salad out of chinese leaf, mushrooms, cucumber, carrots and a simple vinaigrette. 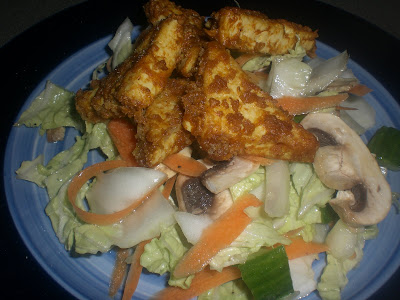 And now the important stuff - the baking. I wanted to use some of the white chocolate I got for christmas and some peanut butter so I made blondies. I got the idea for swirling peanut butter into brownies from the Barefoot Contessa! But this is my veganified version. They are a bit more effort than regular blondies, but I don't apologise for that, cuz they are tasty as fook!
White Chocolate Peanut Butter Swirl Blondies 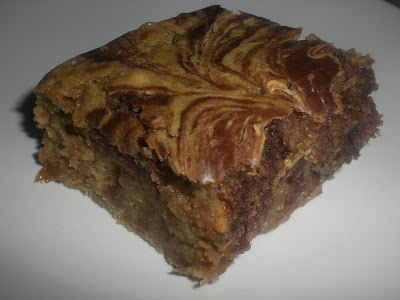 Method:
Preheat the oven to 180°C/350°F/Gas 4.
Mix together the milk and vinegar and set aside. Whisk together flax seeds and water and set aside.
Seive together the dry ingredients and mix well. Whisk the rest of the wet ingredients into the milk mixture and then add the flax eggs and whisk thoroughly - don't combine the two just yet.
If need be, stir the oils back into the peanut butter and if it's not soft enough to drop off the spoon in blobs* then heat it very gently over a low flame, stirring until it softens a little.
Pour the wet ingredients into the dry and mix well until just combined, don't overmix. Remove 1/2 a cup of the blondie batter and put into a small bowl. Mix the cocoa powder in and set aside. 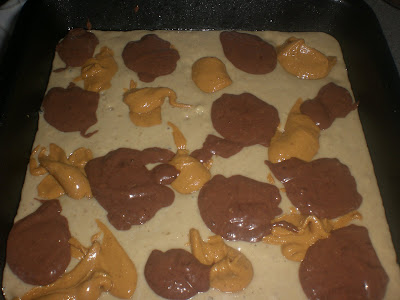 Then take a skewer and swirl swirly swirl... 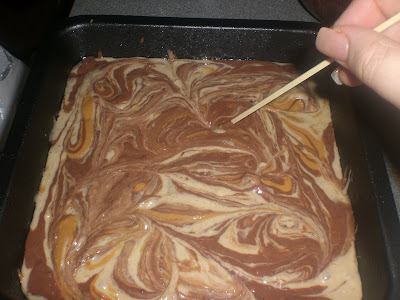 Bake until the blondies are raised and cracked on top and a skewer comes out still a bit soft. It took 25 minutes in my oven. Leave it to cool in the tin and then I used a spatula to cut the blondies into 12 and remove them from the tin to cool on a wire rack. Here they are straight out the oven.... 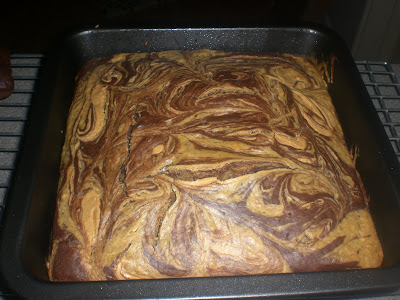 *sorry for shit description!! hehe
Cooking to: Heroes Series 2 - I'm catching up so I can start watching S3 that I've been V+ing.
Posted by Sal - AlienOnToast at 20:52