.....I know I said my last post would be the last one before I moved but I actually have done some cooking this week! So I thought I'd post it.

This was last night's dinner - curry! I didn't think I'd actually put that many potatoes in, but it was awesome nonetheless. I didn't have any coconut milk so I added some soya yoghurt at the end. And I only added one chilli so was expecting it to be pretty mild but it was really spicy - it rocked. I threw some toasted cashews on top and served it with some homemade rotis, cuz I wasn't in the mood for rice. 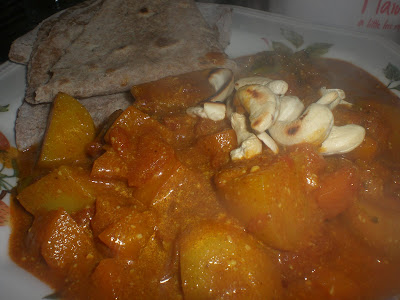 Close up of the rotis. They're spectacularly easy to make and they're delicious. Recipe at end of post. 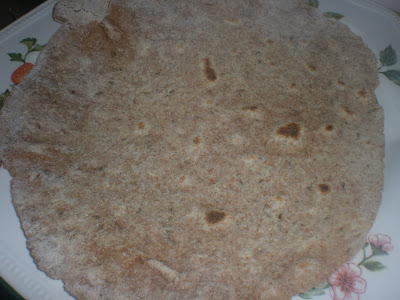 This was dinner the night before. Some bulgar wheat cooked with tomatoes and lots of hot sauce, with steamed brocolli & baked tofu. YUM. 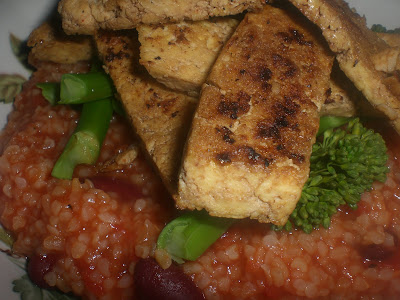 And lastly, Tuesday's dinner. A tofu scramble with some awesome crunchy roasted taters. 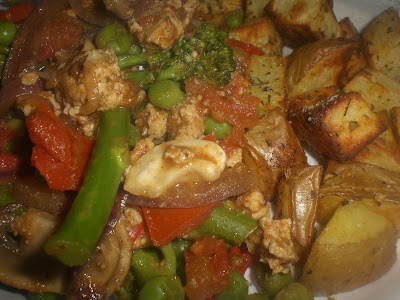 To make them, just mix together all the dry ingredients, then add in water slowly, mixing with a fork until a soft dough forms and pulls away from the bowl. You don't want it too dry but not so wet that you can't knead it.
Knead it gently in the bowl for about 30 seconds, just to make sure it's all combined and smooth. Then leave aside until you're ready to roll.
Split the dough into 4 and flour the counter / rolling pin well. Add flour to the dough as needed to stop it sticking and roll the roti out till they're nice an thin.
Heat up a non-stick frying pan and put the roti in one at a time. Cook for 1-2 minutes, until starting to brown, flip and do the same the other side.
Now I'm off to continue squeeeeeeeee-ing about my move tomorrow! YAY!!! See ya next time with flat pix!!
Posted by Sal - AlienOnToast at 11:50