The second celebration for my birthday was just me and my two best friends. I had the day off so I started it as I did last year.... with french toast and ketchup. And a cup of earl grey (I found decaf earl gray! YAY!) The most important thing in the post? The birthday cake. I made a really great vanillary cake with orange icing, flavoured with orange zest, orange juice and orange liqueur! It was awesome and once I've perfected the recipes I'll post them. Close up! I grated some orange chocolate on top with a microplane, to make it extra sexy. This glass was a pressie off my friend Maz. Here it is filled with sparkly rosé. Tuesday was a gloriously sunny day (which is unusual as I don't remember a year when it hasn't rained on my birthday!!) so I made a rad playlist of mid 90s dance and 80s music and we sat out on the balcony. I bought a disposable barbecue and made some ace food to go on it. It was awesome and just soooo freakin hot. We all got a bit of a tan line! :)

The food I did was the last of my jersey royal potatoes, cooked till tender. Then splashed with olive oil, some fresh rosemary and thyme from my garden, lots of sea salt and 3 or 4 smashed garlic cloves. Then you wrap them up in foil and either chuck 'em on the barbie for half an hour or in the oven at 200C/400F for about 35 mins (which is what I did). This is Jamie Oliver's method that I saw on TV about 5 years ago and it rocks so hard, I used to make them all time. I wanted the food to be awesome, but didn't really want to spend the whole of my birthday morning in the kitchen. So I took 2 packets of cauldron tofu and sliced them up into big triangles. Then I poured a jar of reggae reggae cooking sauce over them and left it to marinate. I love Reggae Reggae Sauce and the new jars of cooking sauces (which I can't seem to find on the website) are on special at Sainsbury's this week - £1 a jar!! I bought two and this was reallly good! I just chucked them on the barbie until it was starting to char. To go with - garlic bread and that is a sauce I made out of soya yoghurt, fresh mint, a squeeze of lime and some salt & pepper, just because the tofu was really spicy and needed something cooling on the side. I forgot to get a pic but I also roasted some asparagus on the barbie too and it was delicious. I made some simple veggie kebabs with mushrooms, peppers & red onions. This salad looks like a right old mess but it was delicious!! I soaked some finely chopped red onion (a couple tbsp, just what was left after making the kebabs) in the juice of a lime. Then I added a small avocado, chopped and mashed it so there were just a few chunks left in it. then I added some orange pepper (what was left after making kebabs), some fresh mint and coriander and a bag of salad leaves (rocket and baby chard). Then I added butter beans and a lemon vinaigrette. Simple but it was really REALLY tasty! Maddie (my friend's pup) was happy too, she got to spend the afternoon soaking up the sun and swapping between different laps!! She likes those cushions!! OK and yesterday's dinner. I got home and was really not in the mood to cook much but I threw brown rice on to cook while I cleaned up the kitchen. I made Jessy's cilantro / lime rice (awesome stuff!!) and some guacamole. I got some canned sweetcorn and dressed it with a bit of chilli sauce and white wine vinegar and then cooked the rest of the butterbeans with some red pepper, tomato puree, onion and some spices. It was pretty good for something I chucked together. Really yesterday I was craving nachos, as I'd picked up some Nacho Cheezly at the weekend but I didn't have any tortilla chips. So I bought some today and made nachos. I used up the leftover rice from yesterday and threw in some onion, red pepper, tomato puree, spices and tomatoes. I used up the leftover guac and some sour supreme that I bought when I got the cheezly. They were good but I was a total pig and made 2 layers - It was way too much for one, I only ate about half.

I actually enjoyed the Cheezly. Normally I don't really like vegan cheeze but the nacho stuff is pretty tolerable and went really well with the nachos. 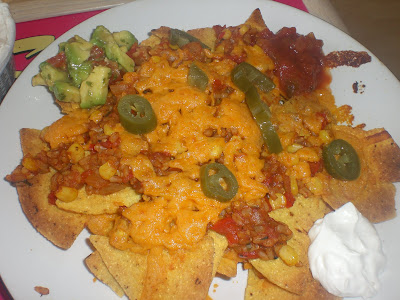 The 3rd celebration is a meal out on saturday so I'll post the pics of that next week!
Posted by Sal - AlienOnToast at 20:09