Zizzi's launched a vegan menu! It's an Italian restaurant so you can probably guess the type of things that are on it. But on the plus side, they have vegan cheese! Which means cheesy pizza, YAY!

So obviously I had to try it out, after every vegan on facebook went and posted pics.

I started with the bruschetta, because I LOVE bruschetta and have been fancying it for ages lately. However, this was not bruschetta as I know it. It was like pizza dough with cooked cherry tomatoes on. Not horrible, quite tasty in fact. But not bruschetta and didn't really float my boat. 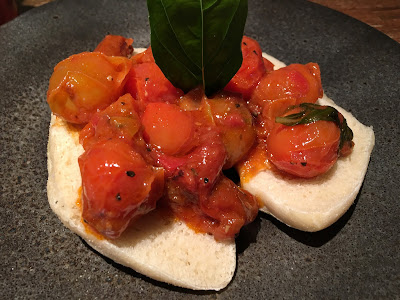 For the main I had a pizza. It's a margherita and then you add whatever toppings you want onto it. I added balsamic onions, mushrooms and artichokes. It was lovely. The cheese isn't stretchy and it's not gummy like some vegan cheeses. Melted, it's more like a white sauce. It's different and some won't like it but I do - it makes a nice saucy pizza. 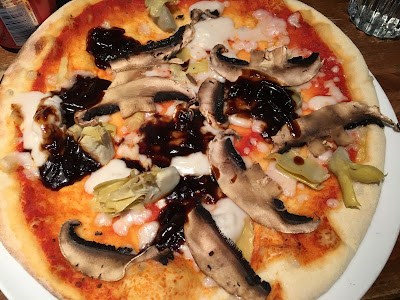 They do dessert too, but I was too full! Fail, Sal!

The waiter told me that about 8 people had asked for the vegan pizza that week. I told him that it was awesome that they'd done a vegan menu and that Pizza Express don't provide vegan cheese! hahaha.

I think it's great that more chain restaurants are starting to realise there's a market for vegans now! I have of course added this info (and a pic of the whole vegan menu) to my Chain Restaurant Options page, hop over there if you wanna have a look.

Hope you're all having an ace week.