I wanted to make my lovely brother Andy some birthday cupcakes because he was so gutted that he missed out on the choc mint ones I made for my friend Maz the other week, but wasn't sure that they (or I) would survive a trip to london on the train and underground in a massive tupperware.
So I went for some cookies instead. These are chocolate chip & orange and they taste so good! There is some dough left that I have big plans for to turn into cookie dough ice cream. More on that later in the week (as long as it doesn't fail miserably).
Here they are, still melty and warm from the oven...

Oh and just cuz I took a pic, this was brunch today. Tofu scramble, rosemary & sea salt roast potatoes, a big mushroom and some iced green tea with lemon. YUM! 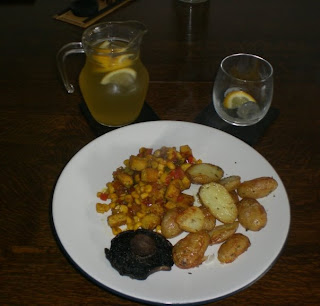