It came to me, I think they call it an epiphany – man that’s a big word!

Had a great weekend (Maz has the pictures on her camera so I can't post any till next time), despite sleeping for 2 nights on the world's most uncomfortable sofa bed, horrid food and Thin Lizzy sucking ass! We shared a chalet (with no shower – I had to wash my hair in the bath with a jug – ick!) with 4 fellas, who’s idea of hilarity was to play Orville singing I Wish I could Fly at 9am on Saturday morning, when I was hungover.

AND - I fell over, I used to fall over a lot when I was younger, after a beer or two. But this time, I wasn't even drunk! Someone who was drunk spilt beer and I slipped in it and smacked down on my knee - I have a lovely colourful bruise there now, but at least I amused the group of lads singing "she fell over she fell over" at me - aren't boys original!!

I also got lots of “why would you choose to be vegan”, “carrots are alive as well you know” and “how do you milk a soybean” …. type questions – the soybean milking question was pretty amusing though.

The only vegan food option on site (the Ghetto!!) was chips and crisps; typical. Luckily I took soya milk and cocoa pops and of course... cupcakes and cookies.

VCTOtW basic chocolate cupcakes, with my new peanut butter frosting – which rocks socks!! I was wingin it, but recipe on the way – more on that in a bit though! 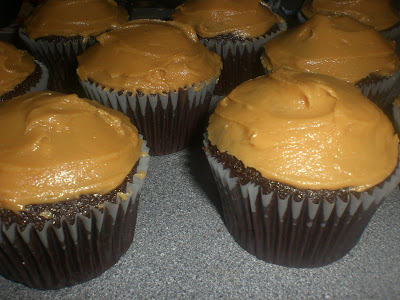 This is what happens to your cuppies when you travel in the Venga Bus for 4 hours! :( Still, as my dad says - all goes down the same hole - we are eloquent in my family, eh!! 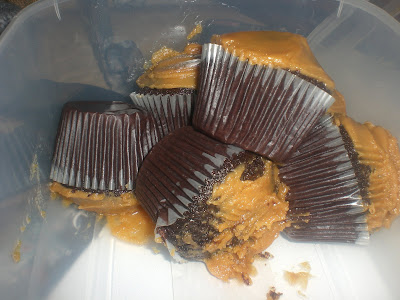 And cookies – these earned me a few “wait, you made these..... yourself?”, “these are vegan?”, “they don’t have tofu in do they?” …… etc questions, I think they were impressed! Dreena’s recipe again because it really is the best CC cookie recipe I’ve tried so far. 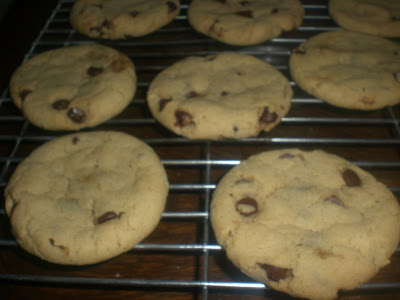 Onto other info, I’ve started writing a cook zine! Basically, I wanted to put together some recipes for my family and friends (as sort of an extra stocking filler for chrimbo), giving them ideas for easy, healthy vegan dishes.

I often hear from my family & friends that they are stuck for what to cook me and they don’t know where to start looking. So this zine is aimed at friends & families of veggies / vegans who are not sure what to cook for them and are stumped by ingredients they’ve never heard of in recipes they Google. All the dishes will be easy to make and I’m also avoiding using any ‘weirdo vegan ingredients’ – ie, anything that is difficult to find or requires a trip to a specialist shop / website.

Once it’s done, it’ll be a free PDF for anyone that wants it – more info on that when it’s done. Some of the recipes will be ones I’ve posted before on the blog but there’s a few new ones I’m working on too, going in there.

One will hopefully be a variation on this recipe that I ripped off from my new Favourite American TV chef, Giada De Laurentiis, because it was awesome – just needs some tweakage! (I spent about 2 hours watching videos on the Food Network website when I got home Sunday and I really like her and her "ya gotta have parmesan.." - even if I don't agree! I’m ‘borrowing’ another recipe off her when my friends come for dinner this week.)
Oh and the PB frosting recipe will be in there too, once I figure out measurements.

I had some leftover so I did a pepper too, as I only had one big mutha tomato. It didn't work as well, as I didn't think to pre-cook it, which peppers need. Served with roasted brussels, which I know looked burnt - they were perfect. 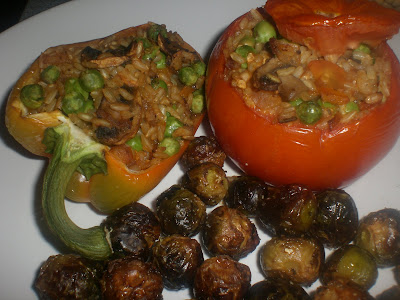 The point of the post title though (aside from listening to too much Bowling for Soup) – I finally got my white bean & sweetcorn soup right. HURRAH! I’ve been tinkering with this for ages and this about the 6th attempt. I just could figure out what was wrong with it – I tried adding potatoes, soya cream, soya yoghurt, changing the herbs, upping the beans, lowering the beans…. and it was still off!

But today it hit me – almost literally because of my stupidly over-filled cupboards. When I went to make the soup, I found I had only got one can of sweetcorn left and I’d eaten half of it for dinner! Dammit. But I did have a can of creamed style sweetcorn – GENIUS! 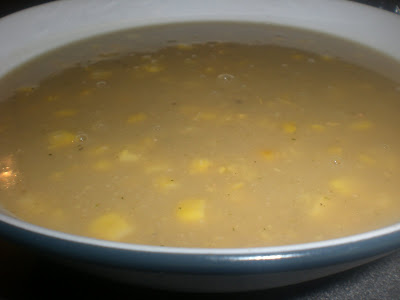 Method:
Over a medium / low heat, sauté the onion in the olive oil with a pinch of salt for a few minutes, until starting to look translucent. Add the garlic and just cook for a minute or so, so you don’t burn the garlic. Add the beans, stock, thyme and a good pinch of pepper. Throw the herbs in whole, the leaves will fall of the stems and you just need to fish the stalks out before you blend the soup. I don’t add salt because my stock cubes are salted and also, I cooked the beans in veggie stock so it doesn’t need it. If this isn’t the case, add a good pinch now.

Bring to the boil and then reduce to a simmer. Cover and cook for 25 minutes.

Take off the heat and blend the soup (I do mine with an immersion blender, in a jug, in 2 or 3 batches). Pour back into the pot, add the creamed sweetcorn & regular sweetcorn if using and stir through. Check seasoning and enjoy with crusty bread. Yum. 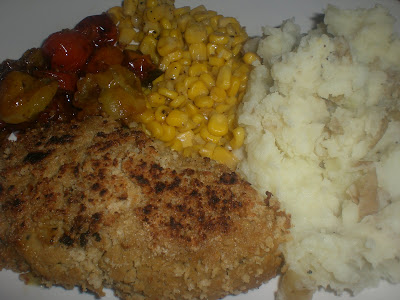 I have some erm, experimental muffins in the oven right now – they smell good, let’s hope they don’t suck!! I'll tell ya next time.
I'm off to finish putting up my chrimbo tree! :-)
Posted by Sal - AlienOnToast at 20:30