And what pisses me off more than being ill - feeling too shit to go to the Fratellis' concert last night and missing my work xmas party today.

I hardly ever get ill, thank god because it is so boring sitting at home when you're ill - all I've done is watch Alias, eat comfort food and drink lots of hot water with lemon, ginger & agave stirred in.

Comfort food for me is squishy white bread, mashed potatoes and soup. So yesterday for dinner I had the last of my seitan, breaded in coarsely ground matzohs and baked and served with some smashed taters and bbq sauce. 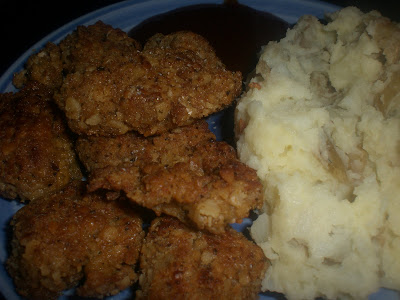 Today I combined potatoes and soup and made baked potato soup. I remember seeing a recipe on vegcooking.com, but it had soy cheese and other stuff I don't like in it. So I decided to wing and so have no exact recipe. I'd give approximates, but it wasn't quite right - too oniony. Don't get me wrong, it was nice but it needs work so I'm gonna have another go tomorrow so - hopefully I'll have a recipe next time! I threw half the baked potato skins on top of the soup, as it would have been wrong of me to bin them. The other half I just ate with some margarine and a sprinkle of salt. Sometimes I think the best bit of a baked potato is the skin! 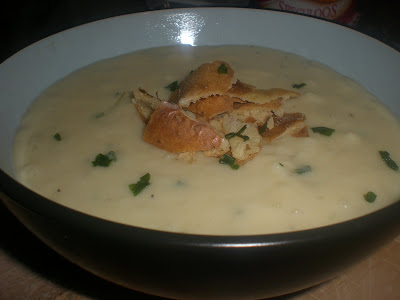 Breakfast was just a thick watch of tiger bread with speculoos spread. I ordered this stuff after seeing Mandee's blog post and thread on the PPK and knew I had to have it. God, it is soooo good. Totally worth the £5 shipping!! :) I'm thinking it would be amazing spread between a couple of shorbread cookies!! 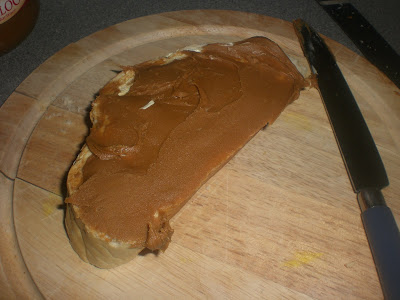 And here is my christmas tree. This pic is a bit crap, it is prettier in real life, even though I'm rubbish at decorating Christmas trees! 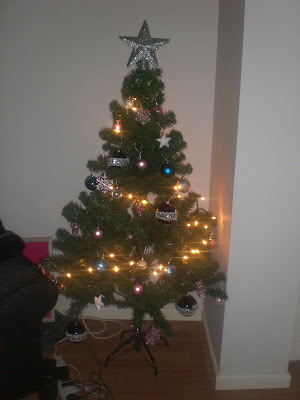