I haven't been taking that many pics lately, mainly because I been eating a lot of meals that look like this and they tasty but they pretty boring! But this one was really good. It was just some baked tofu, with salad and a dressing made of tahini and miso and chilli sauce. I forget what else went in but it was good. 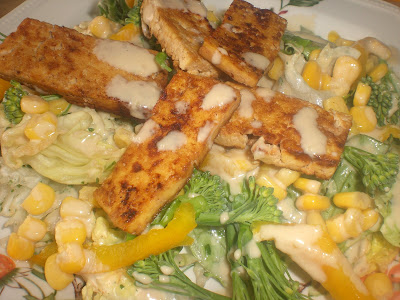 Last saturday, we went out to celebrate one of my best friend's 30th birthdays (the one I was dogsitting for last month!) We went for an Italian meal and I didn't fancy any of the vegan options on the menu. Actually I'm lying, there weren't any vegan options, but there were the usual things you can just ask them to take the cheese off. But as I said, didn't fancy those so I asked them to do me a salad and this is what they came up with and I have to say, I was REALLY impressed. It had roasted onions, peppers and courgettes, potatoes, rocket and a great dressing with chilli oil and balsamic vinegar. 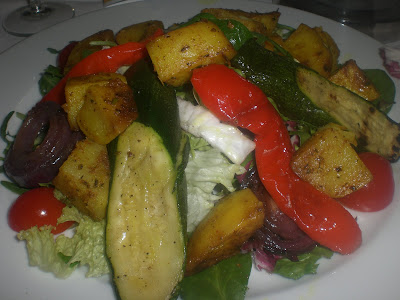 I really wish I'd asked them how they did those potatoes, as I couldn't work it out but they were amazing. Seriously.

Birthday cake was my mango & coconut cake - which seems to be my friends' favourite as it's the one they always ask for. But when I was reading the recipe I realised it had a shit-tonne of oil in. So I cut it back to 1/4 cup and increased the soymilk to 1 cup, plus I used 1/4 cup of the mango syrup to make up the liquid content. I used tinned mango as I couldn't find a ripe enough fresh one (about half a tin / 1/2 cup finely chopped) and it was just as good. This mixture made for 15 cupcakes! 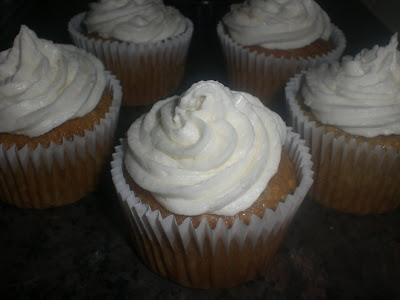 This was lunch the next day (when I was hungover from way too much Prosecco!!). I bought some falafel and made a tahini sauce and then served it with some tomato, grated carrot and a wholemeal pitta. Super yum! 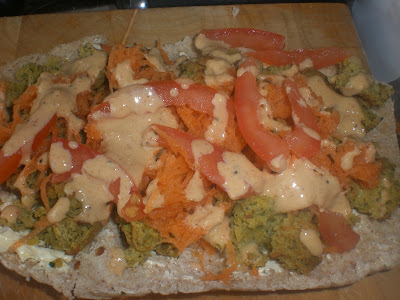 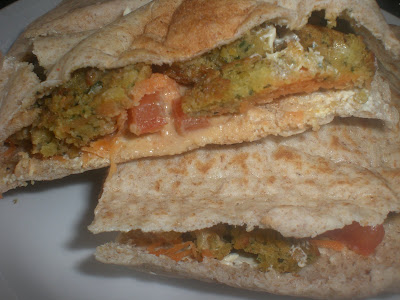 I had some falafel left over and I made some bulgar wheat that I added a tin of tomatoes and some spices to. It was really good, but I didn't quite get the spcies right, so I'm gonna work on that one! 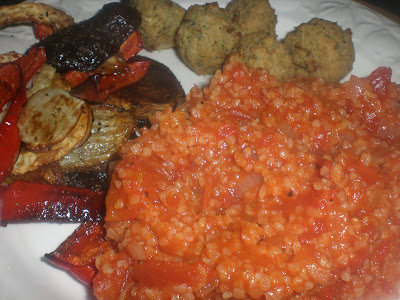 Like I said, I been eating a lot of salads for lunch lately and this was one I had at work last week. Really good! Rocket salad, sun dried tomatoes, chick peas, raw broccoli, carrots, cucumber.... with balsamic dressing and mixedseeds. Sorry for the crap pic, I took it on my phone, which doesn't seem to have any flash options. 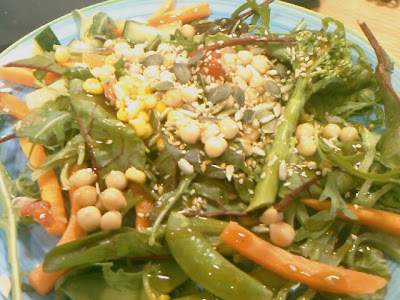 During the week I really fancied some chocolate soymilk, but when I picked up the packets of Alpro I saw that one 250ml carton weighed in at over 700 calories! I thought that was unbelievable. So when I went home I made my own with light soy milk, a spoonful of cocoa, a dash of vanilla and a squeeze of agave nectar. Tasty, chocolatey and less than 100 cals! Which meant I could have an oreo. YAY to my friend for bringing me back oreos from Las Vegas - UK ones are not vegan. 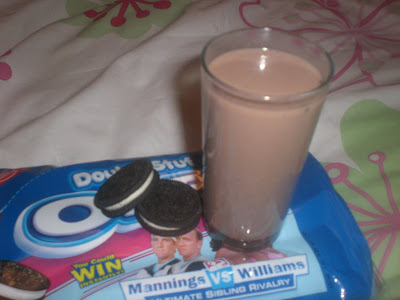 Yesterday me, mum & dad hopped on the train to reading to do some shopping and have lunch. We were wondering around the oracle trying to find a veg-friendly restaurant when my dad spied a Wagamamas! HURRAH. I had my usual yasai itame (gorgeous spicy coconutty soup with loads of veggies, noodles and herbs - sooooo good) and a side of chilli/garlic/salt edamame. I snapped a pic of the soup on my camera phone! I've tried so many times to recreate this and I NEVER get anywhere near close! 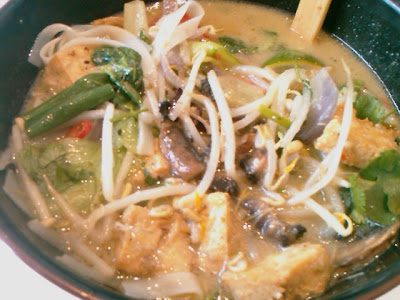 Another bonus of going shopping with the parents (aside from them paying for lunch) - accessories!! Mum was buying a new bag and so was I and Debenhams were having a sale but you had to spend £50! Mum's bag was £49 and mine was £25 so she bought it for me! YAY. I really love Julien Macdonald's Star range. His bags are leather free - yay! And he does some awesomely trashy, sparkly shit that I just love. This pic doesn't begine to capture the gorgeous pretty blue/green of this bag. It's lovely. Mum thought I was mad and kind of turned her nose up!! haha 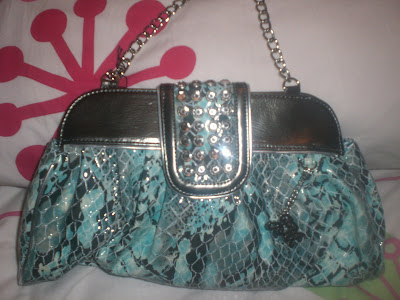 Lastly, today's dinner. I bought all the stuff to made lasagna but none of us could be bothered to wait for it. So I made a quick veggie casserole cuz mum fancied potatoes and something in gravy. But as I was cooking she knew it would have to be vegan, but they still really enjoyed it so I'm happy. It had fennel, carrots, mushrooms, potatoes, red pepper, red onion and cauliflower. The sauce was just veggie stock, red wine, dried thyme & oregano and a good splash of vegan worcester sauce. Really good and lots of gravy to soak up with bread. 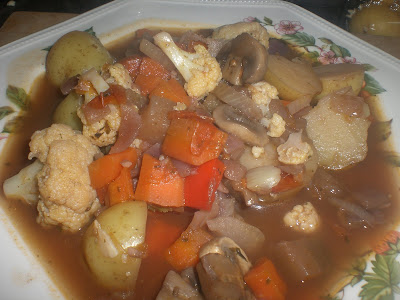 Oh and I know I promised a tattoo photo, but I'm very sad to say that the guy did such a shit job that I've had to book in with the place that did my first one so they can fix it! I wish I'd listened to my gut and gone there in the first place. However, I think it should be fairly simple to fix, so pics when it's all done next month!
Posted by Sal - AlienOnToast at 19:36