The Lady Luck, Canterbury (and some other food from the weekend!)

This past weekend was Simon's 40th birthday and also my Dad's 65th on the same day. So us two, my parents and my brother, sister-in-law and 18 month nephew all went away for a long weekend together in Canterbury.

We ate a lot. Here are the photos.

On the way down, we stopped for a coffee at the motorway services, so I grabbed the new Starbucks wrap that I've seen so many times on facebook. It's a limited edition one for the festive season (thank GOD!...) and despite debates, it is vegan. 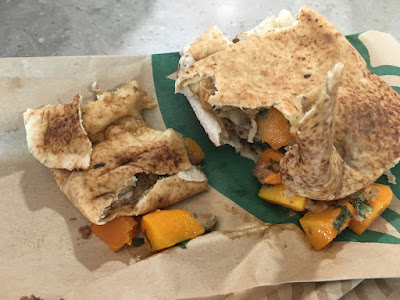 Unfortunately, not only is it really expensive and SMALL, it is fucking vile. The butternut squash was hard, there was no discernible seasoning (the same problem I used to have with their falafel wrap) and there was an odd sour taste to it. I managed a few bites before giving up and getting nachos. In fact the picture above is how much I left of it. ERGH.


Which were WAY better! Motorway service stations are getting a lot better!! 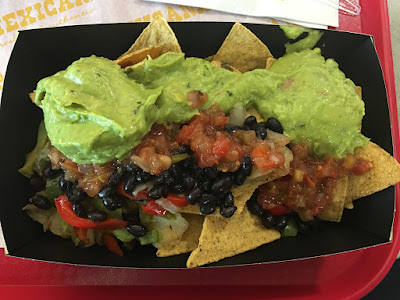 I got extra guac, as you do! 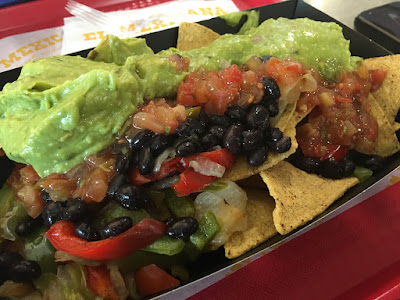 When we got there, my bro cooked dinner. Everyone was having meat so for me, we agreed on a big stuffed mushroom. I was totally unprepared but managed to cobble together a stuffing of a sauteed, broken up, Linda McCartney sausage, some breadcrumbs and some violife Parmesan style cheese. Which I was pretty impressed with, seeing as I'd had a couple of celebratory proseccos by this point. 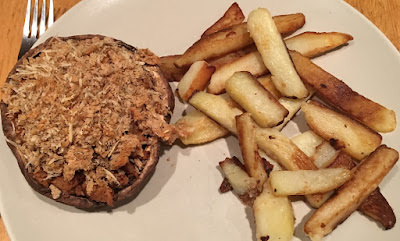 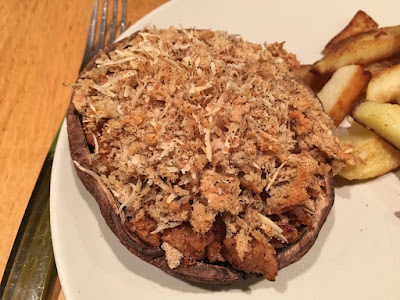 Next, the cakes. The birthday boys were not happy to share a cake (bad enough they share a birthday I suppose) so I made two. A 3 layer chocolate cherry gateaux type affair for my dad: 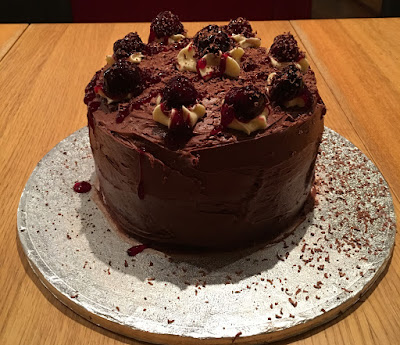 Seriously, I think this is the best decorating job I've ever done on a birthday cake. I'm far from a pro at this but I was really happy with how this came out.

Simon loves apple pie and fruit desserts so this was an apple cake with caramel icing and salted caramel drizzle. (The little bits on top were salted caramel nuggets that I found in sainsbury's, I think they're Dr Oetker.) 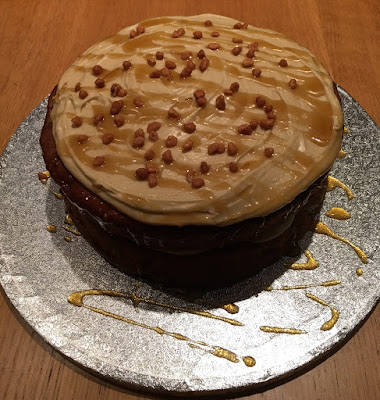 This was by far the most popular of the two cakes. The apples kept it really moist (ergh, I hate that word) and it wasn't too heavily spiced. I almost have this perfect! So at Christmas when I remake it, I promise to write it down and post the recipe!


Obviously I had to try a bit of both, it would have been wrong not to! 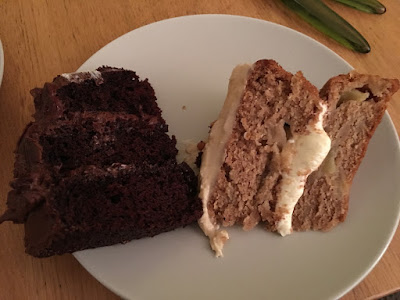 The next day, for lunch, we walked into Canterbury town centre, which was a short walk from our accommodation. My mum had already been on Happy Cow and found a pub that did vegan food, including dessert!

It's called the Lady Luck and it was a lovely place. I loved the pub itself and the food was brilliant and the staff were super friendly and helpful.


pics of the menu 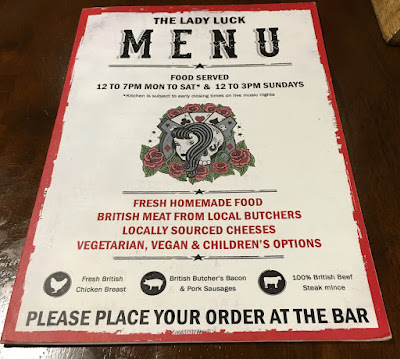 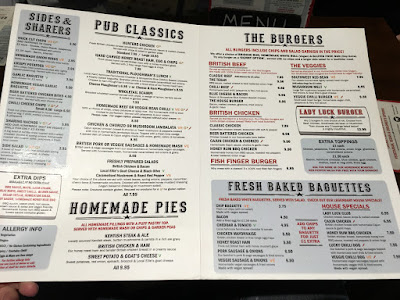 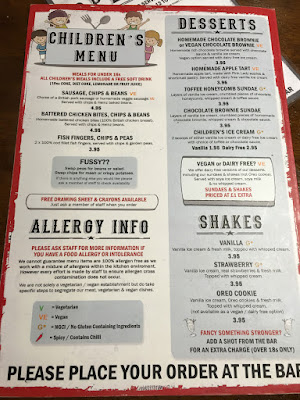 I had the vegan sausage and mash. They make their own vegan sausages, which I was super impressed about. They are delicious too! Also, great mash! 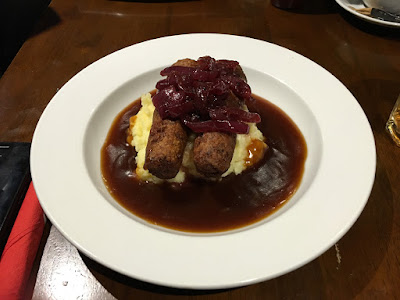 To go with it, I had to have a milkshake. I had vanilla, with a shot of amaretto in! It was brilliant! 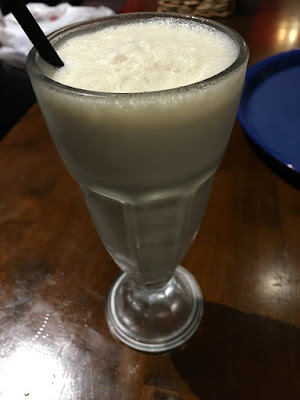 Simon got an oreo milkshake with a shot of cointreau in. (the menu says that the oreo milkshakes could not be made vegan but Simon double checked with them and it was due to possible cross-contamination, as per the label on packs of oreos. As I'm ok with this, he got a vegan one so i could try it!) This was sooo good. 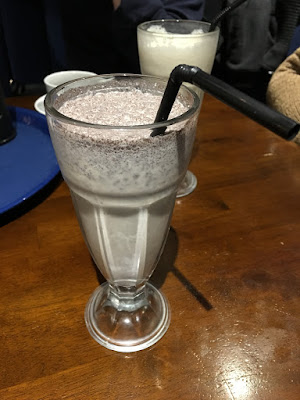 We went back again the next day and I got a chilli dog! I was only mildly disappointed that it wasn't spicier. But it was really tasty! 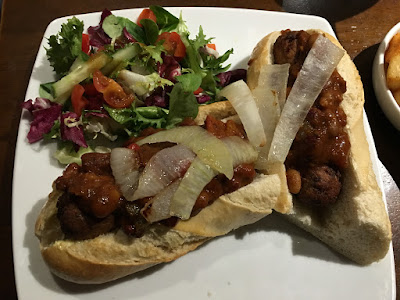 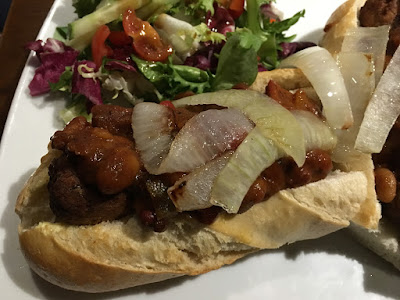 I got crispy fried potatoes on the side. These usually come with sour cream but I got barbecue sauce instead! :) 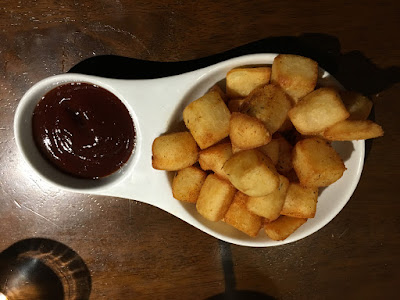 We got milkshakes again too. I got a strawberry one with strawberry liqueur in and Simon got the oreo one again. 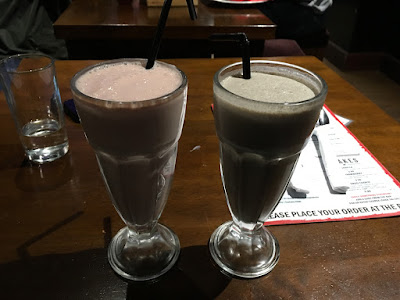 We also had to get a pud to share, as I was too full to eat a whole one! So we went for the apple tart, which was lovely pastry with apples and cinammon sugar dusted over it. It was delicious. (They also do a vegan brownie!) 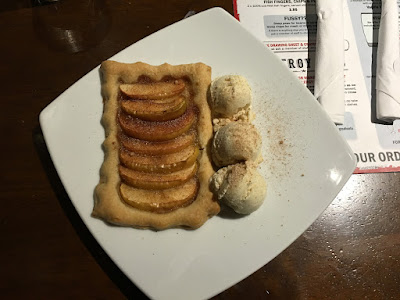 If you're in or anywhere near Canterbury, definitely give this place a go. It's awesome!