The first of my What I Ate posts for MoFo is some of the food I ate in LA/Burbank on the first leg of our recent Holiday. Sorry it's 8 days late... moving on!

We booked to go to Comic Con in San Diego, for the second time this year. Last year we flew into Vegas and spent some time there. This time we flew to LA and decided to stay in Burbank, so we'd be close by for the Warner Bros. that we had booked onto.

So this is what we ate when we were there.

When we arrived in LA, we went straight to our hotel and then spent the next 5 hours trying desperately not to fall asleep, in an effort to beat the jet lag a bit.

We had a quick look on Happy Cow and saw there was Fresh Bros Pizza just up the block from us; so we walked on up there. It's basically a pizza place where you build your own pizza and they have vegan options. I got an individual pizza with beyond sausage, daiya cheese and mushrooms. They also do vegan tenders, so I got the smaller portion of those. I'm so glad I didn't get bigger portions of either, as this was a pretty big portion of food. Simon got the medium pizza and that fucker was HUGE!

When the guy brought out my vegan foodz he asked me if I wanted some vegan ranch or blue cheese and I was like, err hell yeah please to the blue cheese!

I enjoyed the pizza a lot; I think the tenders were Gardein, which I like and vegan blue cheese - yes! (I think it was Follow Your Heart.) 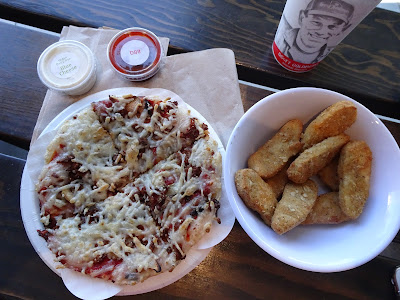 The next morning, we wanted a decent breakfast, as we were booked onto the Warner Bros. Studio tour and wanted something to get us through the morning. We found a cafe not too far away called Bea Bea's on Happy Cow and grabbed an Uber there.

I got the tofu scramble, which is a huge dish of rice mixed with veggies, vegan sausage and chunks of tofu and some avo on top for good measure. And some potatoes on the side! This was SO good and SOOO filling! I love the idea of a rice scramble and I deffo need to recreate that. I actually don't think the tofu was really even needed, especially with the sausage that was in here that was really really REALLY good! I had this for breakfast two days in a row! 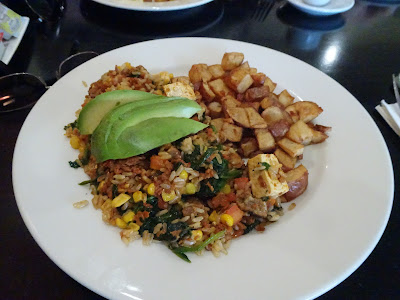 I won't spam you with Warner Bros pix but just a couple of highlights for me....

I'm on the Bandstand in Stars Hollow! 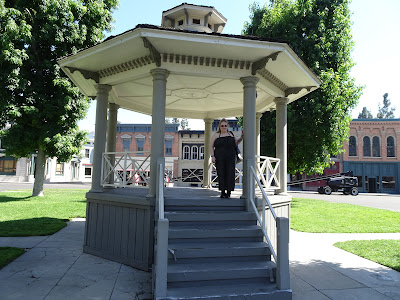 This is me on Lorelai and Rory's porch! 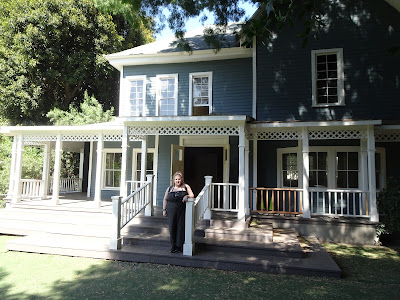 ...And this is the Gellers' House - the scene in the prom episode of Friends where Ross is sat on the stairs? Right here! The rest of the house is just a dilapidated shell, which is weird, but pretty much what all the houses on the tour look like when they're not being used for filming. 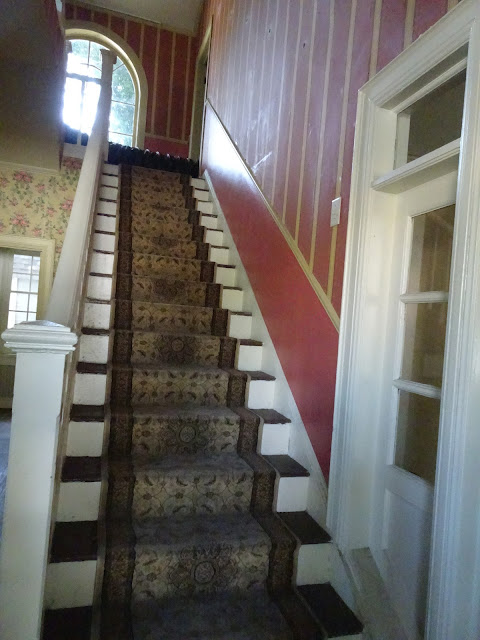 And now I'm in Central Perk! Or a recreation of it, including the sofa, anyway! The full set no longer exists. 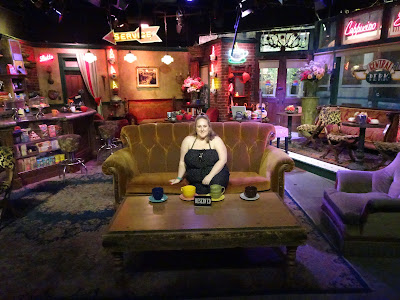 Later that day we headed down to Universal Citywalk, which has shops and restaurants in. I spent a little time in Sephora :) and then after some googling, we found that Johnny Rockets had a vegan burger.

So that is what I got; apparently it's a Gardein black bean burger and it was pretty friggin good! 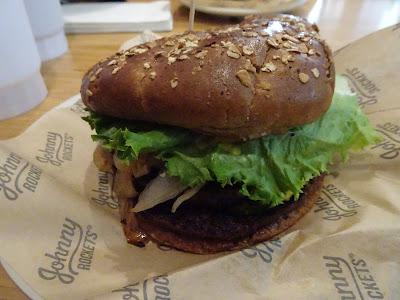 We shared some tater tots too, but didn't even eat a quarter of them! So.Much.Food! 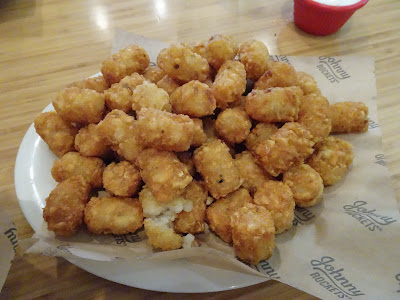 We also spotted Voodoo Doughnuts and I was pretty sure I'd read they did vegan donuts and you know what, they do! YAY. 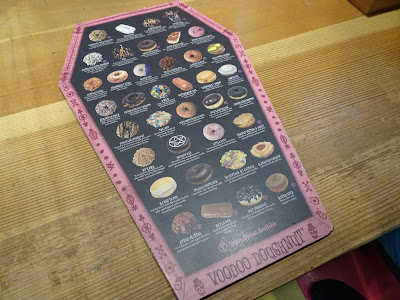 Here's what we got. We took them back to our hotel and shared them over the course of the next 12 hours. Including at 3am when we were wide awake - stupid jet lag! 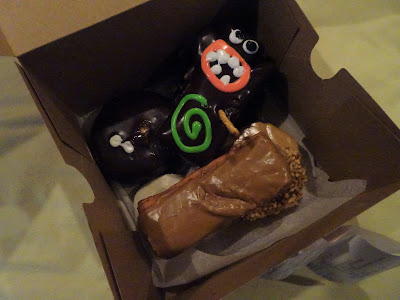 Boston Cream - this was my favourite, it was so good! (sorry for lighting, it was late!) 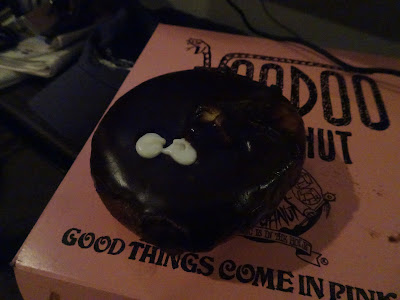 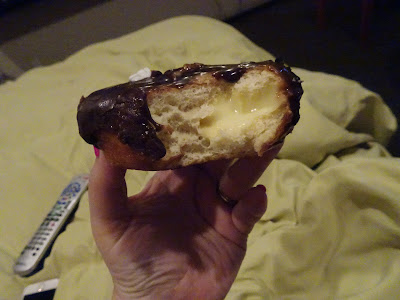 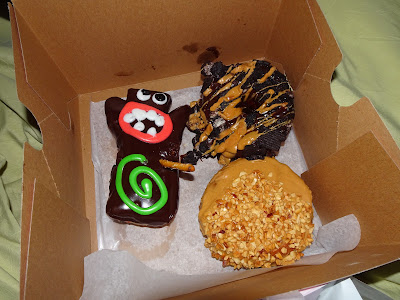 PB&J - this was a bit dry (maybe because we ate it the next day) and kind of claggy. I wasn't fussed on it. 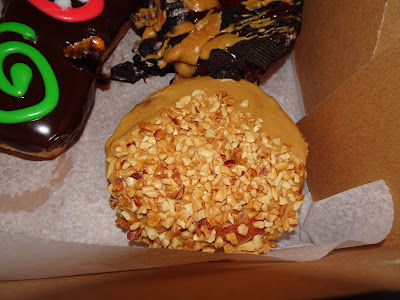 I forget what this was called but it had oreos and PB on it. Again a bit dry but still good. 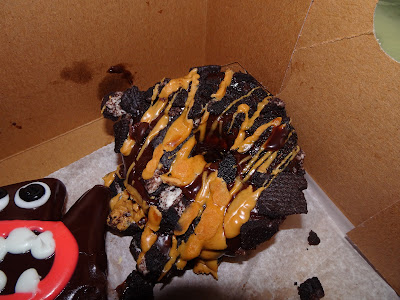 I had to get the voodoo doll as well! This one was super good. 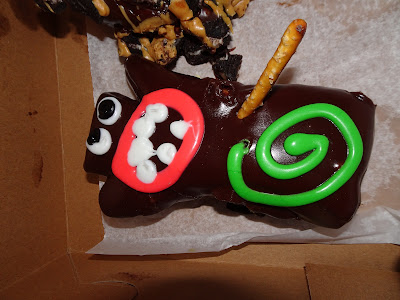 So after finishing these, we got on the train to San Diego, which is where I'll pick this up later!