So apparently I’m not great at sticking to a schedule 😊 – Sorry. I’m going to go ahead with the post I had already planned for today and will try and get the two posts I missed last week up, as bonus posts this week.

So my Monday theme is veganising… and today’s veganised dish is this Rustic Potato & Fennel Galette, which is a recipe I found on Good Housekeeping. 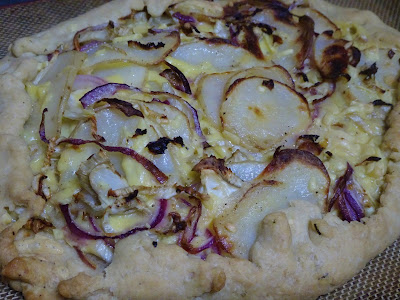 I had to make a couple of substitution to make this vegan:

Firstly, the pastry on this was SO GOOD! Really buttery, flaky and light. I was doubting the use of white vinegar, but whatever alchemy that does – it works!

If you can grab the Naturli vegan blocks in Sainsburys before they all disappear forever* then do it. They make such amazing buttercream without the need for shortening and as I found out yesterday, pastry! For the love of nooch though, don’t try and make caramel with it! Jojo and I tried that and it was a huge fail. (*I heard a rumour Sainsburys are going to stop stocking it but some say that it’s not true and they’ve pulled the spreadable one only, due to some contamination issues. Fingers crossed!)

Secondly when, not if, I make this again I would not use the vegan cheddar I used. It was a bit overwhelming and overshadowed the veg a bit. In fact, I couldn’t really taste the fennel at all – it got totally lost.

So when I make again, I will use a scant sprinkle of Violife Prosociano cheese (their Parmesan sub) instead and I may even add a few fennel seeds to up the fennelly flavour. I find that cooked fennel loses most of it’s nice aniseed taste, that is has when raw.

Also, I would recommend not singing along to 80s music while unpacking your food processor to make the pastry! I did this and cut my finger on the blade and had to spent 5 minutes with my hand in the air like a bellend while it stopped bleeding!

But overall – yum! I like that it’s a rustic pie and I didn’t have to faff with getting it into a pie dish. I really hate rolling anything out, but it was worth it. So it’s no good for a quick weeknight tea but if you’ve got a couple of hours to spare one day, give it a go! 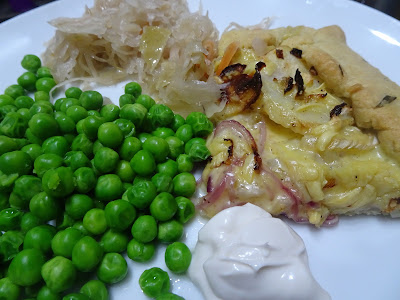