My Friday theme is testing a recipe from a vegan blog or cookbook and the first one I've got for you is the Pea Speltotto with Lemon and Hazelnuts from Hugh Fernley-Whittingstall's 'Much More Veg'.

This cookbook is all vegan, which is unusual for a non-vegan chef and so I was curious as to whether it'd be any good.

As the title would suggest, it places most of it's emphasis on using veggies as the star of the show. Which I kind of love and it makes a change from a lot of cookbooks that tend to focus on heaver 'comfort food'. Not that I don't love those, I do - but it's nice to try something a bit different.

This recipe appealed to me right away because I love peas and spelt. YAY.


So this my attempt (served with some baked tofu): This is Hugh's (screenshot from the kindle book). So mine's not a million miles off. 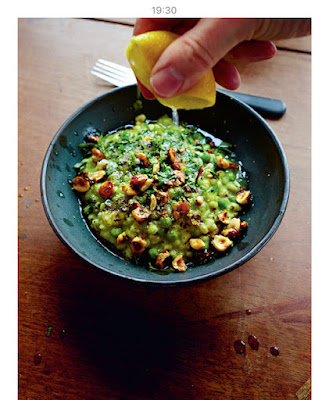 Overall it's nice but I found it a bit lacking in flavour. I'd make it again but I'd probably add a bit more lemon juice and maybe some more fresh herbs, just to perk it up a bit. This does have a spritz of lemon and some fresh parsley at the end, but it could have done with MOAR.

I loved the lemon and hazelnuts on top, that worked super well and I'll be using that idea again!

Overall, there's some interesting looking dishes in this book and I like that there's lots of recipes using veggies I rarely or never use. I'm planning to try some more of them out over the summer, including the roast fennel, new potato and tomato stew and the new potatoes and lentils with coriander and tamarind sauce.

Have you got this book? What do you think? What have you made/liked/disliked from the book?

Hope you have an awesome weekend, all.