So we got into San Diego, the day before preview night of Comic Con and as we did last year, we met our friends at Hodads for a burger. They are known for huge, amazing burgers and thankfully they make a vegan one! 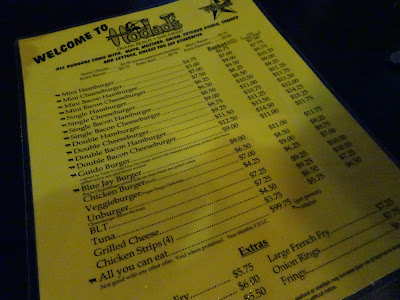 It's not a totally faux meat type of burger, as it also has some veg in. I like it a lot though and there's a tonne of toppings! 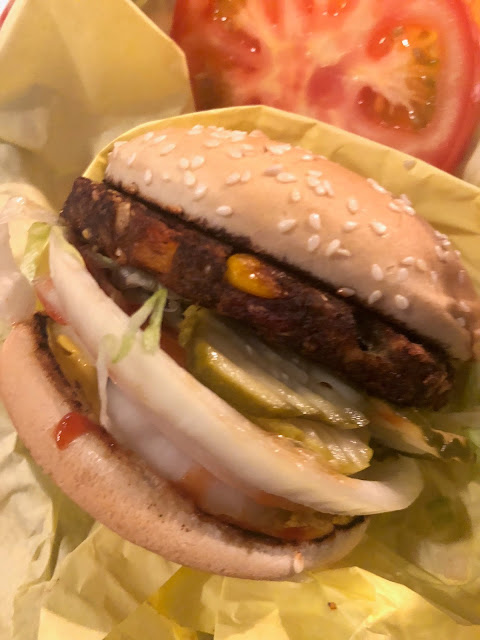 The tomato they cut this from must've been a huge bitch!! 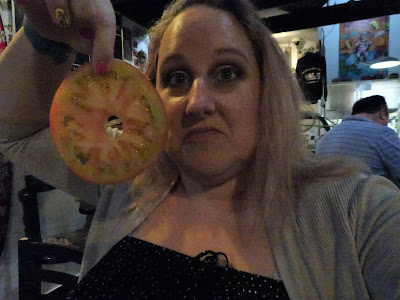 Next morning, we went to the UK Comic Con group meetup at the Broken Yolk. Last year, there were no official vegan options and they made me one of their skillets, with a tonne of veg and hash browns. It was good but not that exciting. So this year I was super excited to hear they now have beyond meat and Just Egg! I ordered the Ranchero Skillet with vegan sausage instead of meat, no cheese and Just Egg instead of regular egg.

There was no Just Egg to be found in this, but they were busy so I just ate it haha. So British! It was still really good though, that sauce was incredible; quite spicy and the dish had fresh chillies in. I really enjoyed it overall. Sorry for my picture, the lighting was pretty bad! 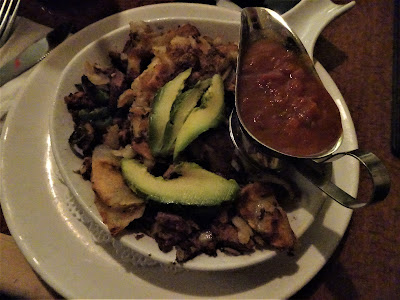 Later that day, we went shopping to Fashion Valley and there were not really many vegan options. However a google search showed that if we ordered a pretzel in Wetzel's Pretzels without butter, it would be ok. So that is what we did. Nothing special and filled some of the hole left by Haagen Daz not having any of the vegan options! :( 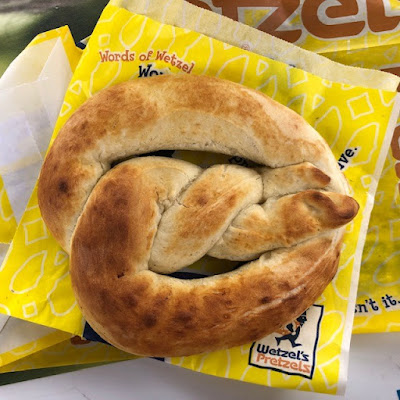 For dinner that night we ordered takeout and I ordered from Native Foods. I realised when it arrived, I'd ordered from there last year and loved it!

I got the Peri Peri chicken sandwich, which was sooo filling and yummy. It had huge chunks of chicken and avocado. I don't know what chicken sub they use but it is scarily realistic and delicious and this dish was really spicy and good! 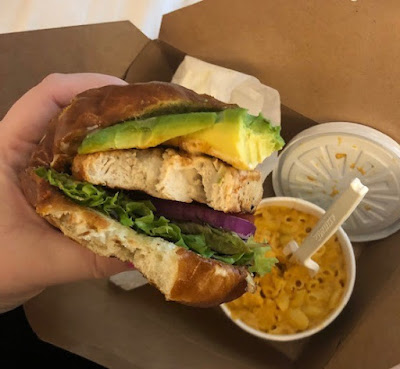 I got it with a side of mac n cheese; I thought it had a bit of a weird taste that I couldn't place! It was better cold, when I ate the leftovers later. 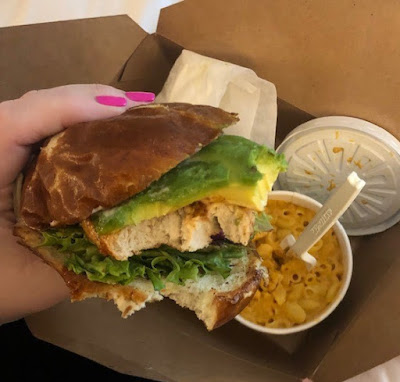 I also got a dessert but I can't find the photos of it! I got the Peanut Butter Parfait which I found to be way too sweet. Simon liked it though. Simon got a cupcake - carrot caramel flavour. The frosting had a bit of an odd texture but it worked well overall with the cake. We didn't think it was full on caramel flavour but it was nice. 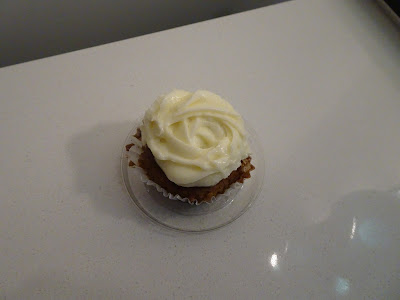 The next morning, we looked on happy cow for somewhere to go for Breakfast and found a place nearby called Breakfast Republic. I got a soy latte which was, erm large! (excuse my red infected eye that I woke up with that day! grrr.) 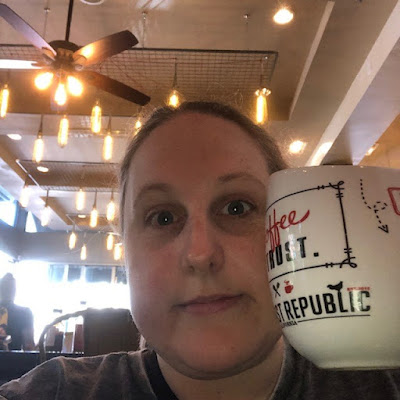 For breakfast I chose the 'Jammin Bennie' which was English muffins, vegan sausage, jalapeno jam, Just Egg and vegan hollandaise. With a side of potatoes (home fries?). The sausage on this was really nice, I finally got to try Just Egg and liked them a lot. The hollandaise was super creamy and yummy and I loved the spicy, sweet jalapeno jam. I had this for breakfast 3 times over the course of this holiday - it was that good! :) 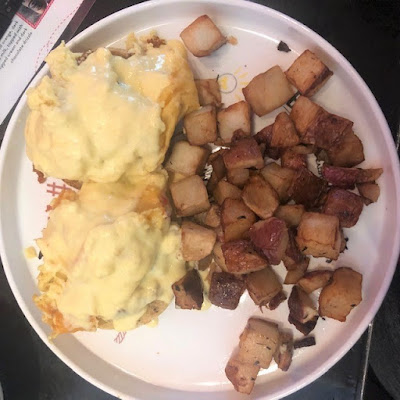 I'm not going to show every single meal we ate in SD, just the ones that I really enjoyed. And one night, we went to a place about half a block from our hotel, called the Owl Drug Company. It was a bar that also did food.

I started with the chips and guac - this guac was seriously so good. Best guac I've eaten in a long time! Unlike my pictures, thanks to the shitty lighting! 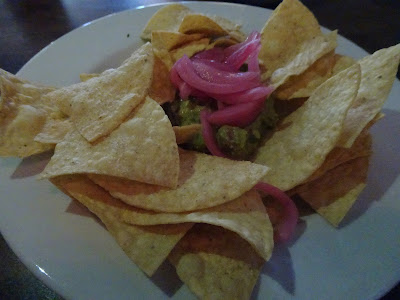 The vegan main dish option was an Impossible Burger; however we were advised the buns they had in were not vegan but they could do me a wrap. So I went with that and wow! This was amazing. Simon (not vegan) agreed with me that it is the most realistic of the faux meat burgers we've tried yet. It's been a long time since I ate at Burger King but it reminded me of a flame-grilled whopper (maybe why they picked Impossible for their new vegan Whopper?) 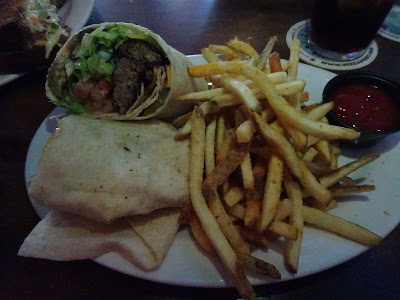 After the last panel of the week (last ever Supernatural panel :( :( sads) we went to the Lazy Hippo for brunch. We went there last year and I remember it having bad coffee but brilliant vegan options. They run a very limited menu during Comic Con - you can usually get all their pancake varieties vegan, but during CC, only choc chip can be made vegan. So Simon and I shared these (we ended up taking half of it back to the hotel and eating it later, because they were huge!). They're really good, fluffy pancakes. 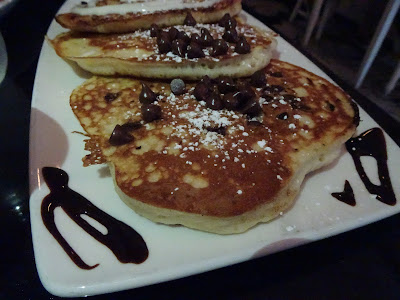 My main dish was these green enchiladas, which had tofu scramble in the middle. These were amazing and made me a little obsessed with trying to find green enchilada sauce in the UK. I haven't managed it but have found some tomatillo salsa, which I'm told will do the job! Still dreaming of these - omg so good! 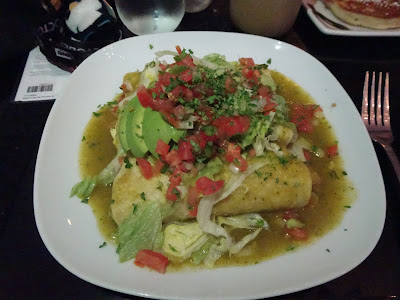 So that about does it for my favourite meals from San Diego. I will say that the increase in vegan options, just in the Gaslamp area, has increased significantly over the last 12 months. I struggled a bit last year in the bars and restaurants near to the convention and had to do a fair bit of modifying. This year, loads more places had labelled vegan options on their menus - how awesome is that!!

Have you been to SD? Where's your favourite place to eat? I think we'll be going back in a few years but need a year or so off :)