Can I get some fries with that shake shake booty?

Next weekend, I'll be away getting what's left of my braincells destroyed by heavy metal, but this weekend I had absolutely nothing to do aside from get my nails done and watch a lot of 80s films! It was awesome.

What I love about 80s films, aside from them being cheesey beyond belief and getting away with it - is the music. 80s films had the greatest, pour some sugar on me, anthems ever as their theme songs - let me tell ya - there was a lot of spatula-karaoke going on in this flat this weekend! I watched Mannequin, Lost boys, Back to the Future, Splash, Wildcats, Ghostbusters, Cocktail, The Breakfast Club, Mystic Pizza and St Elmo's Fire. I rock.

I started the weekend off with a bang on Fridy night - chicken style seitan that I breaded and fried until it was crispy good! Served with baked fries, barbecue sauce and posh mushy peas (which I almost always make with soy yoghurt instead of tofu). I'm gonna post my ingredients for the seitan as soon as I get the cooking method 100% right. I think I know how to fix it so next time - fingers crossed! 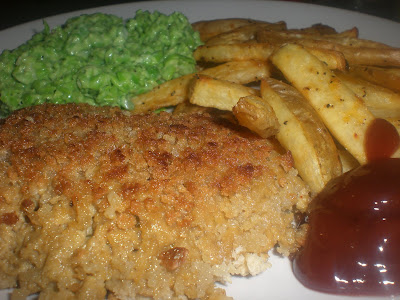 A dinner of tofu scramble and potato cakes, made extra awesome by adding some reggae reggae sauce to the scramble. I'm loving that stuff (I found the Love Apple one in the supermarket too - YAY!). 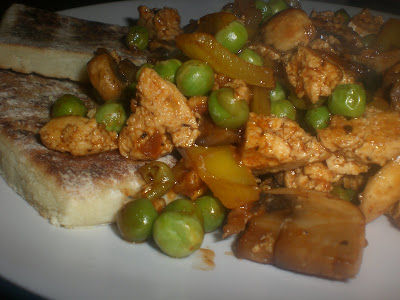 I made soymilk today and used the foam to put on top of my coffee! :) I used some of my seitan to make taco filling - along with some mushrooms, kidney beans, tomatoes, onion, peppers, cumin, oregano and lots of chipolte paste! YUMMMM! I found some taco shells that have a flat bottom so they're supposed to stand up; they don't. But I managed to balance them together just long enough to get a picture. 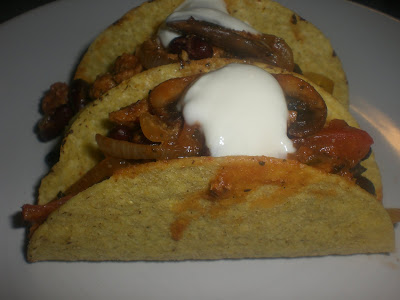 Today for lunch I breaded some of the seitan in a mixture of matzo meal (finely ground in a spice grinder) with some salt and some chicken seasoning and baked it for 25 minutes, then had it in a wrap. I got the inspiration from a wrap I used to love at the pub, in my pregan days. 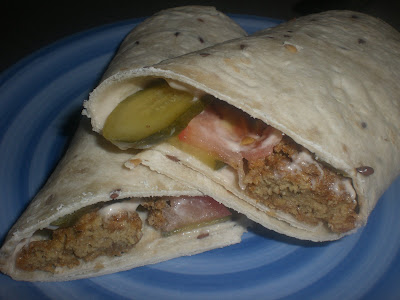 Before rolling - with pickles, tomato and chipolte mayo! 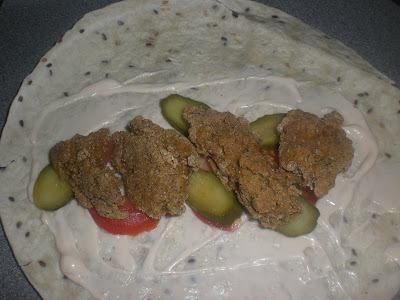 And lastly, I made some muffins today. My new recipe and they worked as well!! Baking mojo is back baby!! At least I hope it is, cuz I have some baking to do before going to Hard Rock Hell on Thursday! ;-) Recipe for Oaty Bran Muffins follows: 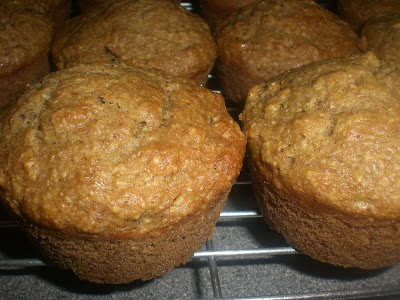 Oaty Bran Muffins
Dry Ingredients:
½ cup / 70g oat bran
½ cup / 60g oats (I used jumbo oat flakes)
½ cup / 80g wholemeal flour
½ cup / 80g plain flour
½ cup / 100g sugar
1 tsp baking soda
½ tsp baking powder
½ tsp allspice
¼ salt
½ cup / 60g dried cranberries (you could sub for whatever dried fruit you like though)
Wet Ingredients:
1 cup / 250ml non-dairy milk
1 tsp vinegar
½ cup / 125ml soya yoghurt
¼ cup / 55g vegan margarine, melted
1 tbsp maple syrup
1 tsp vanilla extract
Method:
Preheat oven to 180°C / 350°F / Gas 4.
Whisk together the milk and vinegar and leave to curdle.
Mix together the dry ingredients and make sure the cranberries are well coated in dry ingredients (this stops them sinking to the bottom of the muffins).
Whisk all the other wet ingredients into the milk/vinegar mixture. Pour into the dry and mix until just combined.
Lightly grease a 12 hole muffin tin (or line with paper cases) and divide the mixture between the 12 cavities.
Bake for 25 minutes, or until a skewer just comes out clean. Leave to cool in the tin for 5-10 minutes, then turn out onto a wire rack until cool.
Inside shot of the muffins... 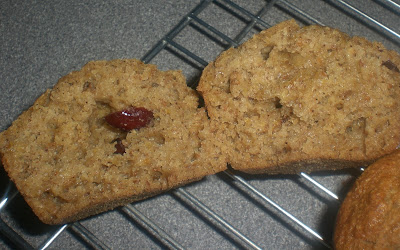 I ain't 'fraid of no ghost.