Do you even know what a wah wah is, girl?

Every time I cook quinoa I have to remind myself of its stupid pronounciation and then I start singing that song into my spatula!!

Tonight's dinner was a simple pilaff, but made with quinoa instead of rice - that I have christened Bean-Wah. It was awesome.

So although it's not that hard to whip up a pilaff, I included a recipe. Mainly so I could give it a stupid name. 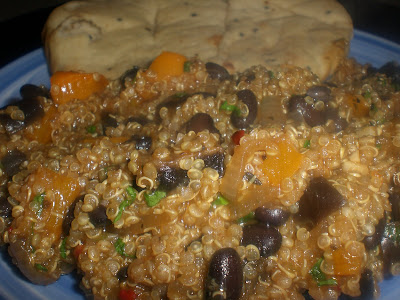 Feel free to vary the veggies & spices to suit your taste or whatever you have in the fridge, I always do but this is what went in it today:

Bean-wah
Ingredients:
1 medium onion
1 tsp olive oil
1/2 an orange pepper
A couple of mushrooms
1/4 of a large aubergine
1 clove of garlic
1 tsp (ish) paprika
1 tsp no salt added poultry spice
pinch of chilli flakes (optional)
1/2 cup / 90g Quinoa
1.5 cups / 375ml boiling water
1 veggie stock cube
1 tbsp nooch
1/2 cup / 8 tbsp cooked beans of your choice (I used black beans)
About a tbsp each of fresh parsley and chives
Salt & pepper to taste
Method:
Saute the onion in a medium frying pan, in the olive oil with a pinch of salt for a few minutes, over a med-low heat. Add the other veg and cook for a couple of minutes.
Add the quinoa and garlic and stir well. Add the water and crumble in the stock cube and a pinch of pepper. Mix well to dissolve and then turn the heat up and bring to the boil. Don't add salt at this point, unless you used a no-salt stock cube.
Once boiling, turn down the heat to a simmer and cover the pan with tin foil (or a loose fitting lid). Cook for 15 minutes, until the germ separates and almost all the liquid is absorbed, stirring occasionally.
Add the beans and nooch and turn off the heat. Stir well and cover with the foil again. Leave covered for 5 minutes then check the seasoning and stir in the herbs.
Serve with crusty bread or if, like me you don't have any, whatever frozen bread like thing you can toast up while the bean-wah is cooking! Mine was a low fat naan! haha. It was good.
Next time on Alien on Toast.... I suck at okara!
Cooking to: Airbourne - Runnin' Wild (if you like AC/DC and that sort of good stuff, I recommend this band. They are totally awesome, pot banging, stripper rock, fuck music! Rad!)
Posted by Sal - AlienOnToast at 17:54