This weekend gone was my Dad's birthday and we went out for a lovely Italian meal, then back to their house for cake. He asked for a black forest style gateaux, just like Mum always used to make him. Except now cake making duties have been passed to me which means the double cream has been 86'd and replaced with chocolate frosting.

I put cherry buttercream in between the layers, along with cherry pie filling. The cherries could really do with being fresh ones for the top as these ones were a bit saucy and it was totally wonky (despite my cack-handed frosting job) as one side rose higher than the other on one of the cakes! Mum's cakes were always perfect looking and I still don't know how she did it but she used to pick the whole thing up, once covered in cream and roll it in chocolate flakes!!

But anyhoo - as retarded as my version looked, it tasted seriously ace.

I doubled the basic chocolate cupcake recipe from Vegan Cupcakes Take Over the World. The buttercream was simple buttercream with some of the sauce from the cherry pie filling mixed in. The chocolate frosting I didn't weigh but it was pretty much the same as I used for this cake, but with a bit less liquid, so it was a bit firmer. 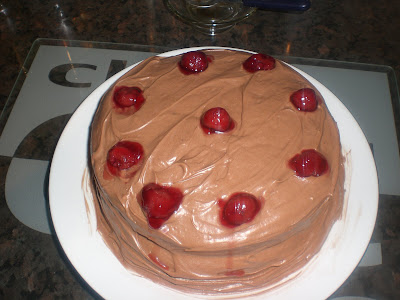 Inside shot.... the flash washed out the pretty pink colour of the icing!! 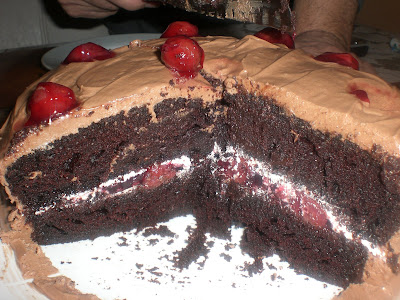 The next morning I got up and baked ginger muffins and some pancakes for everyone for brekkie. My dad decided to make a fairy cake with a muffin and the leftover cherry pie filling. I thought it was awesome so I took a pic of it! 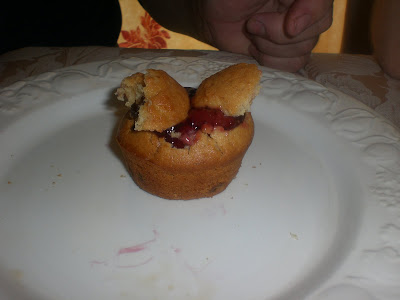