I posted a while ago about my banana pancakes that I made that I hadn't quite got right. I've got them right now - they were breakfast yesterday and were soooo yummy. Recipe is below the pic. 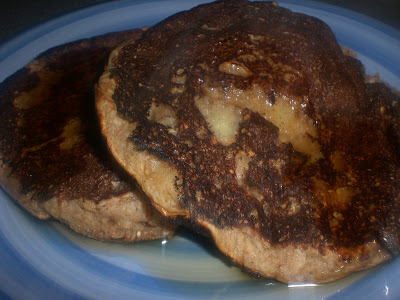 Method:
Mash the banana and mix all ingredients together in a bowl. It's ok if the banana isn't 100% smoothe and it's also ok if you don't get all the lumps out of the batter - don't overmix it!

Heat up a small, non-stick pan and spray it with a very fine mist of flavourless oil (I use sunflower). You don't have to use the oil but it helps.

It's quite a thick batter so spoon into the pan and spread out with the back of a spoon. Cook for just a few minutes and keep loosening with a spatula, until you can put the spatula all the way under the pancake without it getting stuck. Flip the pancake over and cook until you can remove without it sticking, as before.

** the amount of maple syrup depends greatly on how sweet your banana is and whether your milk is sweetened. When I first made these, I did it with vanilla soymilk which is very sweet and I didn't need to add any maple syrup. When I made these yesterday, I used my homemade unsweetened soya milk so it need a bit of help. Just taste the batter before you add any sweetener to make up your mind. Also, don't make them too sweet, as they're going to be dredged in maple syrup and will be just sickly!

Yesterday we went to Brighton for the day. I'm told that Brighton is a veggie paradise and I did see a couple of veggie food places, but unfortunately, my omni friends were more interested in beer than vegetarian shoes! :) However, I did have my favourite Yasai Itame in Wagamamas, so I was a happy chick.

The weather sucked though. Driving home the rain was ridiculous and today hasn't been much better. The noise outside my flat is horrid. The rain is absolutely shitting it down and the wind is howling and so all I wanted for dinner was a Sunday roast.

Sunday roasts are a British institution but not something I've bothered with since going veg. But today that all went out the window.

I roasted up some brussels*, potatoes and carrots and served it with some baked tofu, some Paxo sage & onion stuffing balls (vegan - yay!), peas and some bisto gravy (also vegan - double yay!). The tofu I just slathered on a thick layer of marinade made from miso, soy sauce, veggie worcestershire sauce, garlic powder and black pepper and baked it with the veggies for 30 minutes, flipping half way through. It was a great dinner and ready in under an hour - unlike it's omni counterpart would have been! 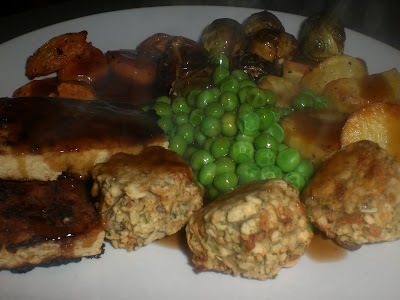 I'm trying to cut the calories a bit and lose some weight before I'm a bridesmaid this year, but I cannot bear to give up baking altogether! My previous attempts at fat free muffins have pretty much been a bit cack, so I went a surfin and found Susan V's Cinnamon Swirl Muffins. I only made 10 though instead of the 12 it should stretch too, because I like big fat muffins. They are soooo good. 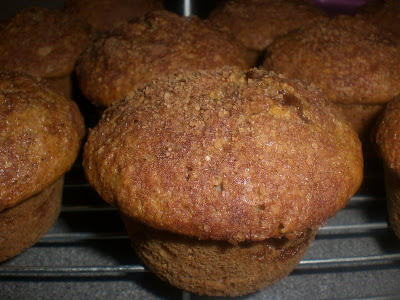 I found this pic on my camera - it was dinner one day last week. I really fancied spag bol - like my mum used to make, but updated to use tofu instead of cow and wholewheat pasta. 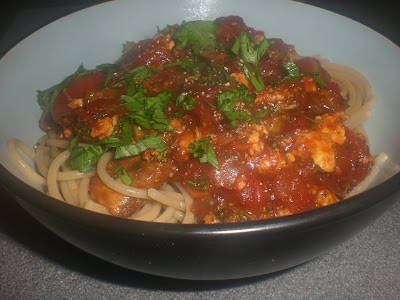 And remember last time I said I suck at okara... here's my failure: spelt okara crackers! They smelt good, the dough tasted nice, but the texture is awful. Chewy plywood! argggh. I think they've got potential though and I've got some beans soaking to make tofu tomorrow, so I shall not be beaten yet! 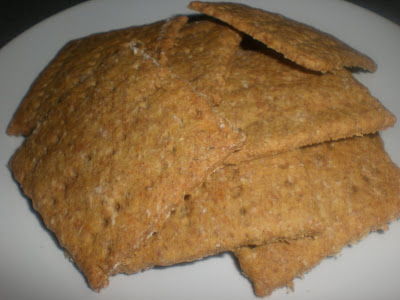 Enjoy what's left of your weekends everyone! :)