I have this block of strong cheddar sheeze and it's open so I need to use it up. I don't like the texture of it so sandwiches are out and the damn stuff doesn't melt, so it's no good for regular cauli-cheeze. So when I saw Rachel Allen make cauliflower and cheddar soup I thought I'd rip her off!

I made some changes, obviously, but more than just veganising it. She started with a bechamel sauce, added cheese and then boiled the cauliflower in stock and blended it all together.

For mine, I roasted a cauliflower, onion and some garlic first, the put it in cold stock, brought it to the boil and cooked it 5 minutes. Then added a little soymilk, some instant potato granules and my sheeze and blended it.

It was not bad. The taste of the sheeze was pretty strong but it was good. Although I doubt it'll be making a regular appearance Chez Alien! However, if you're a faux cheese lover and you want the recipe, let me know and I'll post it.

I made some breadsticks to go with it. They were awesome. 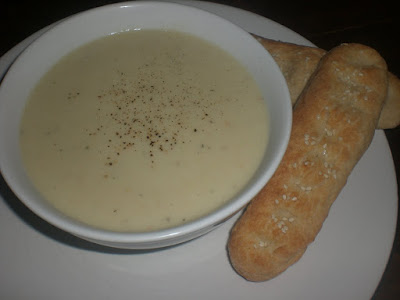 And brekkie this morning was pancakes and berry syrup, as I didn't have any maple syrup. I made common old pancakes but I added in some cocoa, next time I'd add more, but it was still good. For the syrup, I chucked some frozen fruit, the juice of an orange, a tiny bit of sugar and a dash of cinnamon in a pan and boiled it up, then pushed it through a seive. It was pretty tart, but I liked that with the chocolatey pancakes. 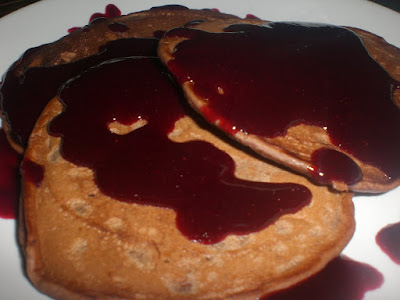 Ingredients:
1 head of cauliflower
1 small onion
1-2 fat cloves of garlic
2 cups of veggie stock
1/2 cup soymilk
1/2 cup cheddar sheese
1/4 cup instant potato (optional to thicken the soup)
salt & pepper
Method:
Cut the cauliflower into florets, cut the onion into wedges and roast both in a little bit of olive oil (i use a spray bottle) along with the garlic still in their skins, for about 20 minutes at 180C, until the edges are lightly browned.

Tip the veggies into a pot and add the (cold) stock and a pinch of salt & pepper. Bring to the boil, cover and then simmer for 5 minutes.
Add the sheese, potato granules (it might go a bit lumpy but that's ok) and soymilk and pour into a blender. Blend until completely smooth then check seasoning. Pour back into pan and heat gently if needed.
Posted by Sal - AlienOnToast at 19:14