I dunno where that phrase came from but every time we had stew or casserole growing up, my Dad would, without fail at some point, say "Stew & beans I guess!"

Those stews were a little different though, because of the meat/ick factor. So today I was totally in the mood for a hearty, delicious casserole and I decided to put it in the oven on a low heat and leave until I got back from my body combat* class. I used TVP chunks, potatoes, carrots, green beans, onion, some stock, tomato puree and some dried herbs.

When I got back from the gym it'd had about 2 hours in a really low (about 125C) oven. I put it on a low heat on the hob, added som cooked butterbeans and peas and left it 5 minutes to heat through. It was ssoooo good.

I've never cooked with TVP chunks before. I bought them to make the Cholent recipe in Veganomicon that's been calling me for ages (still haven't got round to that yet, but I will!). They go a bit chewy but not unpleasant at all, and I dunno what you guys thinks, but I think they look scarily like beef chunks!! 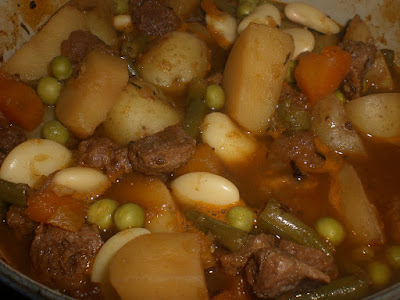 And of course - THE best thing about stews..... loads of thin gravy and soaking bread in it at the end till it goes mushy. Awesome. 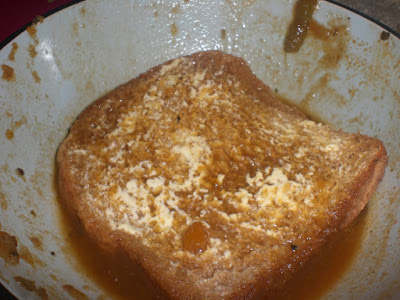 *Body Combat is AWESOME, not as fun as Jam but really really good nonetheless. And good for getting out some agression too. Feckin hard though, I sweated a lot!! I know you wanted to know that! hahaha.