I really REAAAALLY enjoyed my dinner today. Stereotypical veggie dish right? - Stuffed peppers. But I shook it up a little. 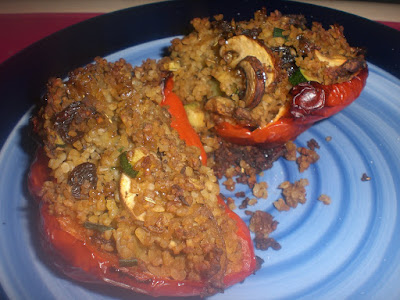 I soaked half a cup of bulgar wheat in hot veggie stock, covered, for half an hour. Then I cut a pepper in half, sprayed it with cooking spray and cooked it cut side down for about 10 mins while I did the filling.
I sauteed a handful of chestnut mushrooms, a couple of small shallots, half a courgette and a fat glove of garlic. Then added a tsp of paprika, 1/2 tsp of thyme, 1/2 tsp rosemary and half a tsp of rasel hanout spice mixture. I added a bit of water to cook out the spices and then added the bulgar. Flipped and filled the peppers and baked another 20 mins.
There was a tonne of stuffing left, so I'll be having that for lunch tomorrow!
I'm excited about tomorrow's dinner and hope it turns out well. It's a recipe I got out of Cook Vegetarian magazine! I'll report back tomorrow!