I'm going to start MoFo by blogging all the food from my recent trip to sunny Dallas. Looking through my photos, I had hardly any of my friend and I, they were mostly food. Haha. So here we go:

The pics of kind of in reverse order, just the way they came off the camera. Here is one of the last meals we ate, at Spiral Diner in Forth Worth. Spiral is an all vegan place and it's awesome! I found Daiya there and ended up coming home with 6 bags of it. I had said to my friend that I wanted to go there for their Sunday brunch and we actually ended up going there for dinner twice as well. This is the Meatballs and Sketti, which was really delicious. With lots of pine nuts, pesto and garlicky herby toast. 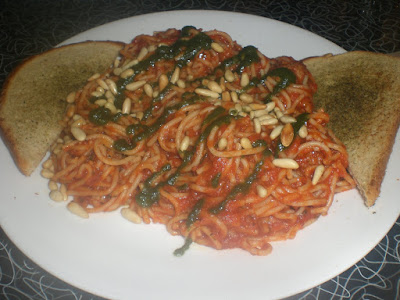 My friend had their burger, with a nut patty and lots of guacamole. She said it was good, it definitely looked it. 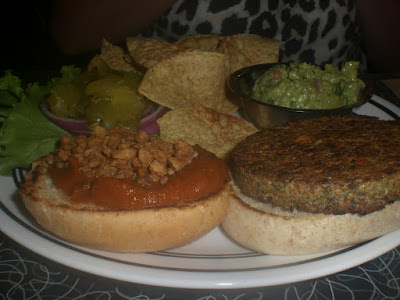 We were too full for pudding so we took it home for late dessert / brekkie the next morning. My friend got 2 chocolate chip cookies and I got a snickerdoodle and a brownie. Both of which were amazing, but that brownie knocked my socks off. 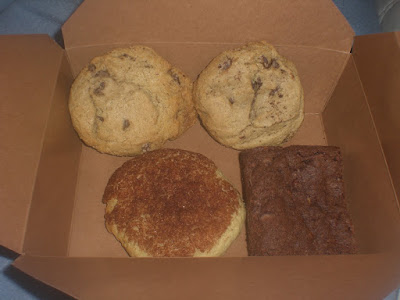 On our last proper night out (ie, where we could drink without having to worry about being hungover on a plane the next day), we went to the Sundance Square area of Fort Worth, to a restaurant called the Uno Chicago Grill, which had loads of pizzas on the menu, including this vegetarian one. It had a base of salsa and a tonne of veggies and I just had them leave off the cheese. It was spicy and delicious. 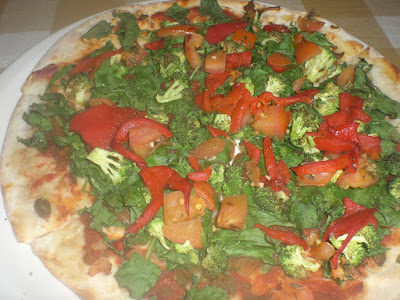 One night we decided on a night in, as we were going out early the next day. So we ordered in chinese takeout. I got a tofu dish with lots of veggies, that was really good. 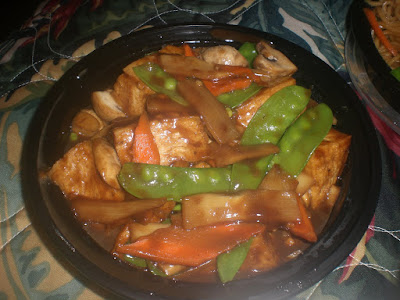 We also got a rice noodle dish, plain rice and fried mushrooms. 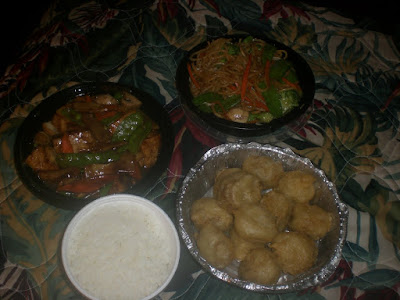 The next day, we went to Six Flags, to scare ourselves shitless on the rollercoasters. It's slim pickings for vegans I'm afraid and not much better for vegetarians. I ended up having fries and onions rings. They were good fries but the onion rings were a bit pants! 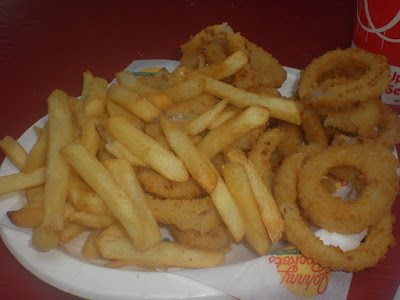 On the Sunday night, we were going to go to an Italian restaurant that was a short walk from Spiral Diner we'd seen. But it was shut, as was pretty much everything on that street, except for a Mexican restaurant. We'd eaten a fair amount of tex-mex and were a bit sick of it, but not having much choice we went in. There were not a lot of veggie options on the menu so I talked to the waitress and they came up with this cheeseless green enchilada for me. It was lovely but my god it was hot! I had to scrape off most of the green sauce in the end because my mouth was on fire. Then I tried their home made pico de gallo and I thought my head was going to assplode! Jeebus, it was the hottest thing I've ever eaten, and that counts the whole chilli I ate in a thai restaurant once as a dare. My mouth was seriously burning for about half an hour afterwards. But I digress, the enchilada came with rice and refried beans. 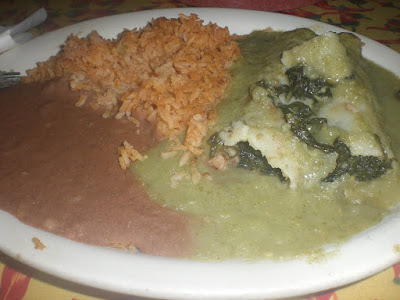 Sunday brunch @ Spiral Diner. Heaven! I had the Lumberjack breakfast which was biscuits and gravy (something I've always wanted to try), sausage and scrambled tofu. It was awesome. All of it, I loved it. 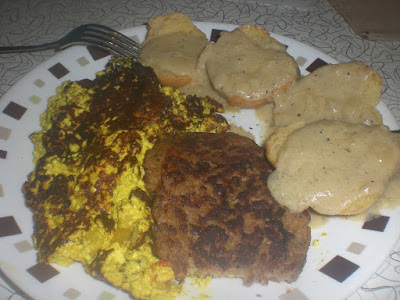 My friend had the Viva Las Migas, which was scrambled tofu with avocado, salsa and corn chips. Which she said was really good, it looked lovely. 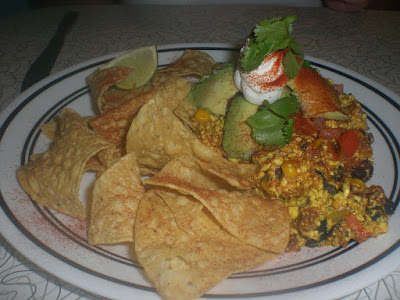 On our first trip to Spiral, I had the meatball sub, which was deliciously cheezy and amazing. And massive. I picked potato salad as my side, and it was completely different to any potato salad I've ever had. It was more like mashed potato with loads of flavourings like gherkins and mustard. It was awesome, I need to try and recreate it soon! 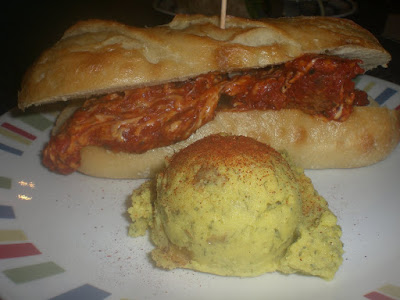 My friend had the crispy spring wrap, which I guess is a veggie take on the hoisin duck wrap. It was the first time my friend had tried seitan as well. She liked it, but I think it took her a few bites to get used to the seitan. I was the same though the first time I tried it, I think it's a bit of an aquired taste. 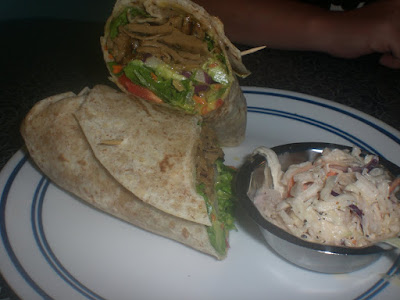 Dessert - oh my god dessert!! We both had the hot cookie sundae. A warm gooey choc chip cookie, with vanilla ice cream, soy whipped cream and chocolate sauce. If I could marry a dessert - it would be this one! It was so freaking good I cannot tell you. Their ice cream is the best ice cream I've ever had - vegan or not!! 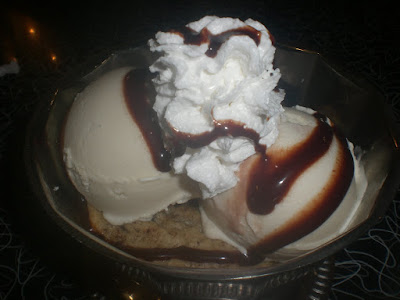 And even though I was pretty damn full - I knew it would be a crime to leave any in the bowl .... 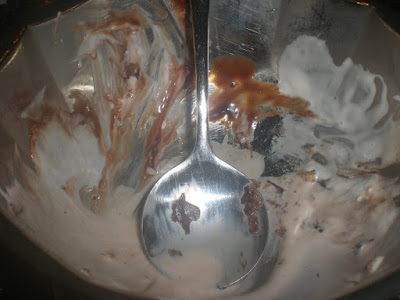 I also had a chocolate almond milk to drink which was yummy too. 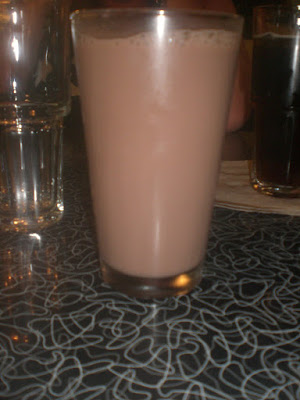 On a shopping trip to Hulen Mall, I got a falafel / salad meal with curly fries on the side. It was pretty good and it was nice to actually get some salad. 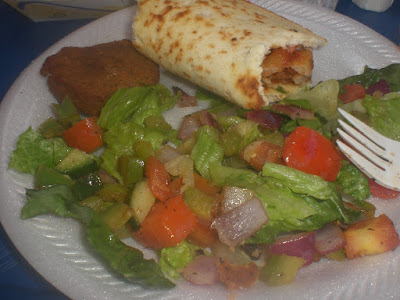 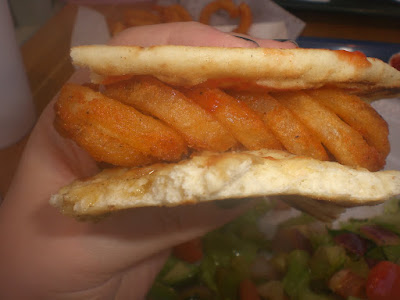 There was only really one night that had a bit too much booze and that was a night out in Fort Worth's Stockyards. Loads of bars / saloons selling things like these: Texas Tea! One of these + a beer the size of my face and hello drunkeness! It was like a long island iced tea but with less coke in, if that's possible! 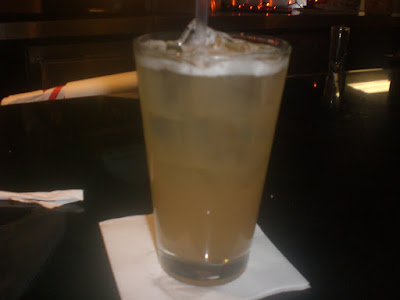 For food, we shared some fries which also had fried onions and jalapenos. Whoever thought to fry jalapenos is a freakin genius!! We also got these fried corn things you can see in the background but I ate one and was dubious of their veganess so stuck with the fries. 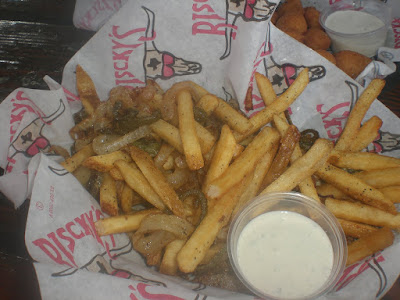 The end of our first full day in Dallas, we found a lovely italian restaurant. I'd had a couple of drinks in TGIs by this point, so I forgot take a pic until I was half way through - hence this horrendous picture! It was a pasta dish, sans the cheese with broccoli and other veggies in and it was pretty damn good for something so simple. 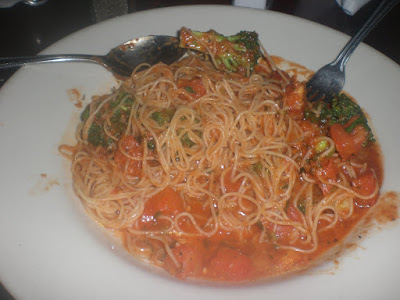 And helping me along to forget to take pics, bellinis! (I have no idea what's going on with my friend's face in the background though, hehe!) 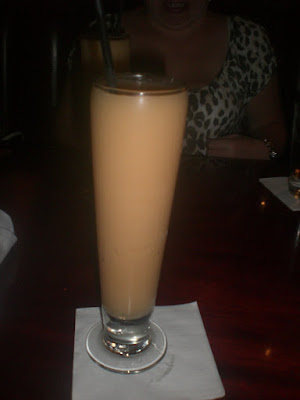 So that's it from Dallas. I hope everyone is enjoying MoFo so far and I'll be back tomorrow with the food from my friend's wedding this past weekend.