This is a tricky one, because I don’t live somewhere that has a traditional dish. In fact if you google it you get “Hampshire is famous for sheep lamb, beef and watercress.” Erm ok. Watercress it is then!? Unfortunately I don’t really like watercress, the only thing I’ve ever liked it in was when I added some to pea soup. But that’s boring.

So let’s look a bit further afield. I live in England and on St George’s day, the local pubs quite often serve as their specials of the day, the 2 most popular dishes in England: Fish & Chips and Chicken Tikka Masala. Yep, Chicken Tikka Masala; a dish invented by an Indian restaurant to suit the British palate. Legend has it, it came about when it was improvised in an Indian Restaurant in Scotland, because a Glaswegian bus driver found the regular tikka too dry!

I don’t know how true that is, but Imma go with it. So here’s my attempt at a tikka masala. I am not going to claim this is in any way authentic and I totally cheated, because instead of toasting and grinding my own spices, I bought tikka masala curry paste! 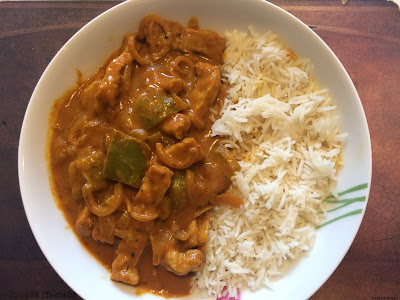 Most recipes I found had tinned, chopped tomatoes in and Mr A did look truly horrified when he saw me opening a carton of passata! But the only time I ever remember eating chicken tikka masala in my pregan days, the sauce was smooth – no lumps of tomato. It was also BRIGHT fire engine red, but that’s by the by. So I went with passata so that it would be like the one I remembered.

This dish was super freakin easy and really tasty.

All I did was fry a chopped onion and a grated thumb size piece of ginger in a bit of coconut oil. Then I added 2 generous tablespoons of tikka masala paste (I used Pataks) and cooked this for a minute or too.

Then I added 150g of fry’s chicken style strips and put the lid back on to cook it for 5 more minutes. I like to add these near the end of cooking, as too much cooking in liquid doesn’t do nice things to the texture!

Lastly, I stirred through half a cup/125ml of light coconut milk and just cooked it for a couple more minutes to heat through.

I served it with plain old basmati rice. 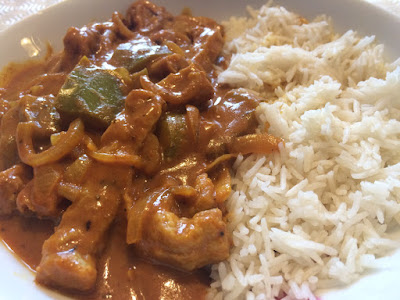