Today's theme is "Recreate a meal from your childhood".

I did struggle with this theme because my mum is a good cook but doesn't necessarily enjoy cooking that much, so I was thinking of things she would make me as a kid. When I'd been ill I wanted mince & tatties. Sometimes a boiled egg & soldiers.

Then I read about The Vegg and thought I'd give a boiled egg a try. I had all these elaborate ideas of making an egg shaped concoction with soymilk and agar! Aside from the fact that would probably be gross, it would have to be served cold. Blahhh.

So I went with a fried egg instead, something else I always liked in my pregan days.

The white is a circle of firm tofu, that I cut out with a cookie cutter.  I literally sprinkled it with a bit of black salt and fried it for a couple of minutes on each side, in a hot frying pan sprayed with a teeny bit of olive oil.

The yolk was the Vegg, made up as instructed (for one egg yolk) on the packet. I microwaved it for 10 seconds though before pouring it onto the white. 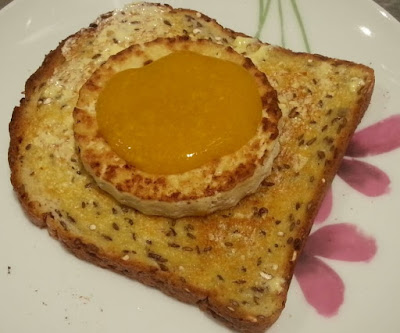 My only regret is that I didn't make two! Because this was lovely and it really did remind me of a fried egg. It's been almost 8 years since I ate a fried egg, but it is what I remember the taste to be like!  So now I just need to try and recreate my old favourite hangover breakfast of a runny fried egg & bacon sandwich! Must get some veggie rashers! :)